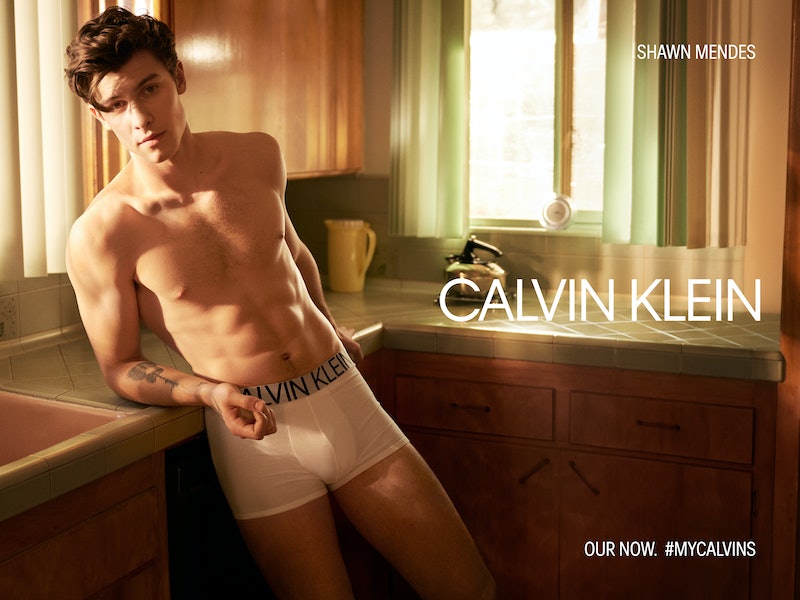 Mendes' first campaign for the American sportswear brand has been fully revealed after an unexpected but well-received weekend tease. It's instantly iconic.

In his Spring 2019 campaign shots, the singer, who is known for his clean-cut image, shows off the iconic CK underwear. And though this probably won't surprise anyone — the internet fully approves. As Billboard reports, Mendes' post revealing the campaign became the singer's most liked Insta post ever. It has garnered over 8 million likes and nearly 500,000 comments as of press time. There are lots of "OMGs" in the comments as well as heart and fire emojis.

And, yes, the images do show off Mendes' washboard abs, the CK boxer briefs with the signature logo waistband, and little else. However, the campaign actually has a deeper meaning for the "Stitches" singer.

"I think that youth, and this generation in general right now, are speaking so loudly, and people are listening more than ever, " Mendes said about the vocal and turn-the-volume-up nature of the youth of today in a press release received by Bustle. "And it's incredible because they're saying very, very important things and people are listening. I don't think we've ever been louder as a younger generation — and in the best way."

In addition to Mendes, the ads also feature actor Noah Centineo, model Kendall Jenner, and rapper A$AP Rocky, along with other talents like Jasmine Daniels, Anna Ewers, Jiali Zhao, Lulu Tenney, Ernesto Cervantes, Fernando Albaladejo, and Timo Baumann. The coming-of-age concept of the campaign is meant capture the raw and honest emotions and experiences of today's youth and what it means to live in the now.

… or rocking a white pair while hanging out in the kitchen, the memorable, the artist looks as though he is enjoying his time in the fashion space and in #MyCalvins.

Once you see the campaign it totally makes sense why this is such a buzz-worthy moment for Mendes. It's also worth mentioning that celebrity-fronted Calvin Klein underwear ads tend to garner a lot of attention no matter who the celebrity is. Just think of when Justin Bieber did also a Calvin Klein campaign. Mendes is joining that same rarified air as The Biebs — a teen idol whose career will very likely surpass that delineation.

Even though Mendes' shots are relatively timeless, the rest of the campaign emits a '70s vibe. Jenner, who appeared in a Kardashian Calvin Klein ad with her famous brood of sisters in 2018, rocks high-waisted dungarees and a cropped logo tank for her shots.

Other stars rock matching bra and undies in vintage-looking bathrooms and hotel rooms. And you have to admit, the Calvins do look pretty comfy.

Centineo and A$AP Rocky also go shirtless in their shots.

All of the images embody a sort of casual, California 'n' #MyCalvins cool and are sure to remain timeless for years to come.