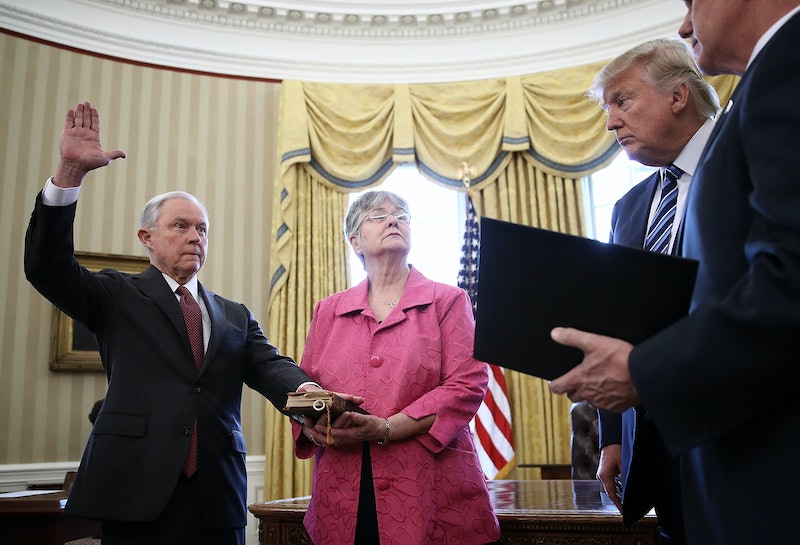 The controversial confirmation of President Donald Trump's attorney general ended with a bang. On Tuesday, the GOP's silencing of Elizabeth Warren on the Senate floor made headlines across the country, with Senate Majority Leader Mitch McConnell handing over the rallying cry to a loud feminist backlash. It was a heartening moment of solidarity for many women, and Warren used the aftermath of attention to make her point even louder.

However, there's a tough pill to swallow along with all the inspiration and hashtags (and now, T-shirts). The reality with Warren is, she persisted, yes, but nevertheless, Jeff Sessions was confirmed as attorney general the next day, and that signals a long road ahead for the Democrats.

Sessions was confirmed on a near party-line vote, 52-47. Despite the anger from Senate Democrats spurred by Warren's procedural silencing, one of their own, West Virginia Sen. Joe Manchin, voted to confirm Sessions. On the other hand, no Republicans voted against the new attorney general.

That should be a red flag for what's to come. The Senate denied a federal judgeship to Sessions in 1986 after accusations that he had expressed racist viewpoints and did not handle voters rights protections adequately. Sessions has rejected these concerns, saying the "caricature of me from 1986 was not correct."

So here's where we were at going into Wednesday: A man who was once deemed by the Senate unfit to be a federal judge was up for the job as the nation's top law enforcer; a female Senator who tried to highlight this fact by reading a letter from activist Coretta Scott King — the widow of Dr. Martin Luther King Jr. — that urged the 1986 lawmakers to reject his nomination, was basically told to sit down and shut up. It was the perfect moment for the Senate, if it ever would, to take a stand.

But here we are, with Sessions as our new attorney general. And that's scary for Democrats. After all, not only did they fail to persuade one Republican to break ranks, they actually lost one of their own. This, unfortunately, isn't entirely surprising.

Nor is it surprising that Warren's procedural silencing, which enraged Senate Democrats, would fail to move any of their Republican colleagues to action. No, it wasn't Sessions' fault that Warren was told to shut up. But the fact that a high-profile debacle unfolded because Warren wanted people to understand her firm opposition to his nomination might have at least made Republicans consider what she was saying. It might have, but it didn't.

Senate Democrats, in other words, have a long uphill battle ahead of them. They can make all the "Nevertheless, She Persisted" merchandise they want, but until it translates into concrete results, it doesn't do the party or its goals much good. The Warren silencing seems to indicate that it's no-holds-barred for the Republican-majority Senate for the foreseeable future. The best Democrats can hope for, at this point, is that 2018 will bring them more allies.