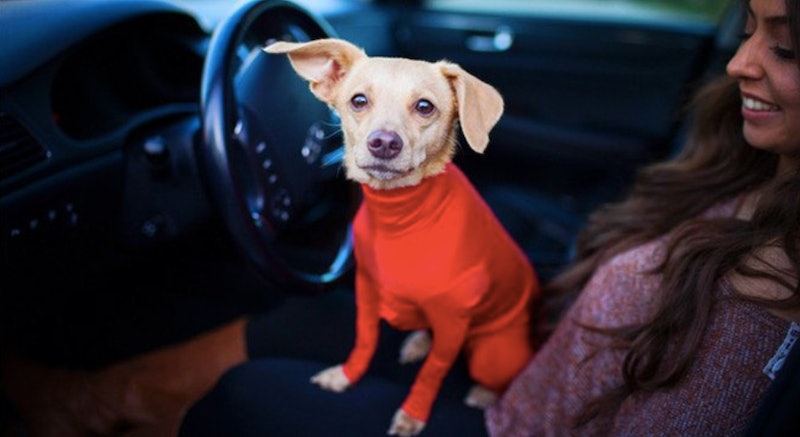 "Nobody puts dog in a corner." —Every dog owner, everywhere. If you own a pooch, you know money — and practicality — are no object. Your dog deserves the best of everything: its own mansion, the chicest attire, exquisite furniture, its own Ferrari. Anyone who says otherwise is toxic and you shouldn't talk to them anymore. There's a new pup product making headlines recently, and this one's particularly special: not only is it perfect if your dog is feeling a little *extra*, but it's beneficial for you and even your pup. These dog leotards help stop shedding, so now your hard wood floors will look less like carpeting, and you'll stop finding dog hair in all your food.

The Shed Defender is the brain child of Tyson Walters, who was troubled by his Saint Bernard's insane shedding. On the Shed Defender's website, Walters says, "I came up with the idea for the Shed Defender back in 2011 because my St. Bernard Harley was shedding everywhere and there was no way to contain it. There were tumble weeds of hair in my car and all over my apartment. I tried every product on the market and nothing worked so I decided to come up with something completely different." His mom sewed the first version, and Walters worked on it from there.

Harley acted as his model, strutting his leotard around town, generally leaving people incredibly jealous of his enviable wardrobe choices. Obviously, people took notice of his savvy sense of fashion, and wanted a Shed Defender for their own pooch.

Shed Defender is made out of recycled, eco-friendly fiber. There's a zipper for when your buddy needs to do his business, too. In addition to guarding against shedding (thereby helping with allergies), Shed Defender can protect against ticks and fleas, keep your furry pal warm, help soothe anxiety, and even reduce barking. Plus, according to one Facebook post with a customer testimonial (from a vet!), Shed Defender is a safe alternative to the cone of shame — although, if we're being honest, the cone of shame does make for some hilarious photos.

And let's get real: it looks pretty bitchin'. The website says your pup shouldn't wear it for longer than a day; and if it has long hair, make sure to brush it afterward.

The leotards are available online starting at $39.99 for a mini, and going up in price based on size. Now, let's get to the really important question on everyone's mind: what color should you go with? If your dog is feeling feisty and powerful, buy one in red.

If you're looking for something sophisticated and chic, black is the way to go. Heck, why pick one when you could have all of them? Other colors include forest green, hot pink, and columbia blue.

Listen people, this isn't about vanity. Okay, it mostly is. But did you know around 10 percent of people are allergic to household pets, according to LiveScience? Contrary to popular belief, it's not the hair or fur that you're truly allergic to — it's the dander, which is flakes of dead skin. You can also be allergic to a dog's saliva or urine. The dander might be the biggest problem because of one surprising fact: the National Institutes of Health says there are detectable levels of pet dander in every home in America.

Shed Defender could potentially help by hanging on to all that stray hair and fur, instead of it flying all around, sticking to your clothes, and landing in your salad. Plus, let's be honest: even if you aren't allergic to dog fur, having to pluck strands of it off your new cardigan or out of your lunch isn't exactly the highlight of your day.

Now, with this sexy dog leotard, your canine can dress nicer than you usually do, and help with allergies. Win-win.