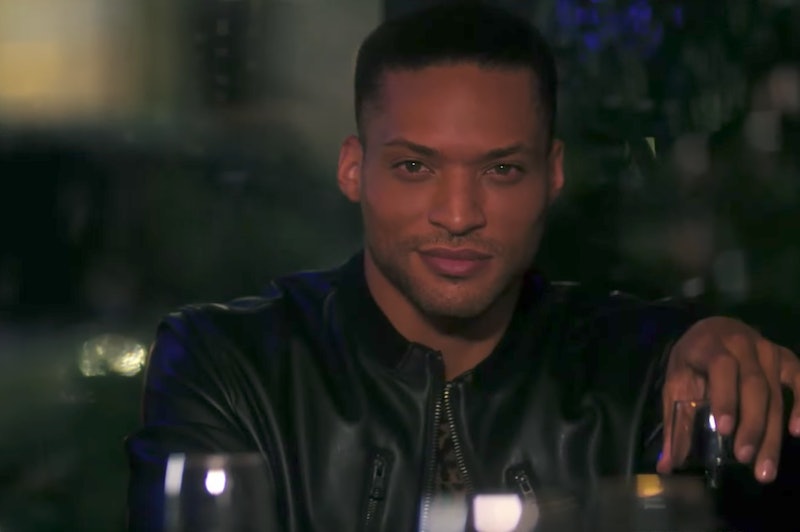 Before he got the role in the Netflix reboot of Spike Lee’s 1986 film, She’s Gotta Have It, Cleo Anthony thought he was pretty well-informed. But through filming the first season, in which Lee expands on the original story’s themes and characters in a contemporary context, Anthony got a crash course in issues ranging from racism and sexism to sexual harassment, beauty standards, homelessness, arts education, and more.

On a recent visit to Bustle’s office, Anthony, who plays the confident pretty boy Greer Childs, describes feeling shocked by some of the show’s storylines, which he couldn’t believe were realistic. “When I read the script I was terrified — what? This happens?” he says. Netflix’s She’s Gotta Have It, much like the original movie, focuses on a black woman named Nola Darling (DeWanda Wise) as she balances her life as an artist with the three men she's seeing — Jamie Overstreet, Mars Blackmon, and Anthony’s Greer Childs. Given the show's emphasis on its free-spirited protagonist's control over her own sexuality, even without the social justice commentary, She's Gotta Have It would likely broaden many viewers’ perspectives.

“What it says about women, I have always been a champion for,” Anthony says. “I was raised all by women and [there were] not many men around so I got a women’s point of view. Despite feeling confident in his understanding of women, She’s Gotta Have It still provided a shift in perspectives for Anthony after he filmed a scene about crossing Nola’s boundaries. In the scene, Greer, who's a photographer, starts taking pictures of Nola and getting close to her, even after she tells him that he’s making her uncomfortable. Nola had recently been grabbed on the street by a man who had catcalled her, and it clearly still affects her. “This guy touched her on a street and now I’m with her in an intimate safe space and she can’t connect with me because of it. That’s heavy,” Anthony says.

Even though he’d read the scene, Anthony explains that acting it out with Wise impacted him in a surprising way. After Nola finally yells at Greer, “I acted the way I would’ve reacted in real life — silence. I was baffled,” Anthony says. “I had some quips, or some clever remarks to come back with but it was inappropriate in that moment. The way the energy and the way it felt, it was arresting. I seized up because growing up with all women… I always have been the one to try to protect, and to be the one who offended, it was a feeling I’ve never felt before.”

Anthony’s reaction to the scene exemplifies how telling stories from different perspectives can help change the way people empathize with each other and learn about the consequences of their actions. “To see that from a position where you connect with Nola, you connect with her story and you see her as maybe your sister, your cousin, your mother, your daughter… it might connect to something in your life,” Anthony says. “You realize, ‘you know what, I may have been more at fault for whatever happened to me or however this situation played out than I thought I was."

Seeing the story play out from Nola’s perspective and seeing the way that the violence and sexual harassment influence her life gives audiences a fresh look at how what might seem like a harmless, flirty act to one person could be interpreted differently by another. “This [flirtatiously taking pictures] is something that I feel Greer has done a thousand times, so he knows that this is gonna get him what he wants and so he goes down a road that is basically a habit or repetitive and doesn’t notice as it’s happening that she’s not responding to it,” Anthony says. Had the story not unfolded from Nola’s perspective, she could have been portrayed as over-dramatic or stiff for not wanting Greer to flirt with her like that. But since the audience has the context to understand why Nola reacted as she did, they're more easily able to empathize with her and, as Anthony said, reflect on the ways they might be inadvertently contributing to sexual harassment themselves.

Even though She’s Gotta Have It offered new insights into how sexual harassment can affect women's lives, Anthony was most shocked to learn about another important issue explored in the show. “I wouldn’t say this is the most important to me, but the [issue] that’s captivated me the most is gentrification,” he says. That’s because, prior to filming in Brooklyn’s Fort Greene neighborhood, Anthony claims to have known nothing about it. “If you would’ve asked me a month before that, ‘hey we got this neighborhood, we want to make it new and fresh,’ I’m like, all right! Let’s do it, that’s a great idea! I would not have seen what they saw from the inside,” the actor says. Apparently, one of the many perks of working on a TV show with Spike Lee is that you get to have one-on-one lessons in "wokeness."

Anthony quickly learned all about gentrification. “What [Lee] came to explain to me was it’s the way that they go about doing it, basically you’re forcing people out, you’re putting people in these sub-standard conditions so long that they can’t take it anymore, people who are from there, who grew up there, they created the area, and now they can’t even sustain living in the area,” Anthony says. “That’s when I realized what gentrification was all about, and you know he gave me many firsthand examples and it blew my mind.” Because other Brooklyn-based shows, like Girls or Broad City, have failed to address gentrification as meaningfully as She’s Gotta Have It does, the Netflix show’s lessons will likely stick with viewers like they have for Anthony. “That was the thing that I’m still studying, I’m still looking into [gentrification]” he says.

While not everyone gets the opportunity to learn about the world from a masterful visionary like Spike Lee in person, She’s Gotta Have It serves as a good substitute for a tutoring session like the one Cleo Anthony received, and he's happy to be a part of the ongoing conversation. Though certain parts of She’s Gotta Have It may shock viewers or be difficult for them to understand, Anthony provides a perfect example of how stories from perspectives other than your own can help make everyone a little more empathetic. Hopefully Cleo Anthony's openness to learning from others' perspectives will catch on over time; until then, he'll have to continue leading by example.

More like this
Yinka Bokinni Recalls Terrifying Truth At Heart Of 'How To Hire A Hitman'
By Frances Stewart
Don't Expect To See Your Fave Modern Royals Depicted On 'The Crown' Season 6
By Jack Irvin
At 14, Kate Berlant Had A Wheelie Backpack & One Line In 'Lizzie McGuire'
By Samantha Rollins
What’s New On Netflix: 'Stranger Things' & 'Mean Girls'
By Arya Roshanian
Get Even More From Bustle — Sign Up For The Newsletter