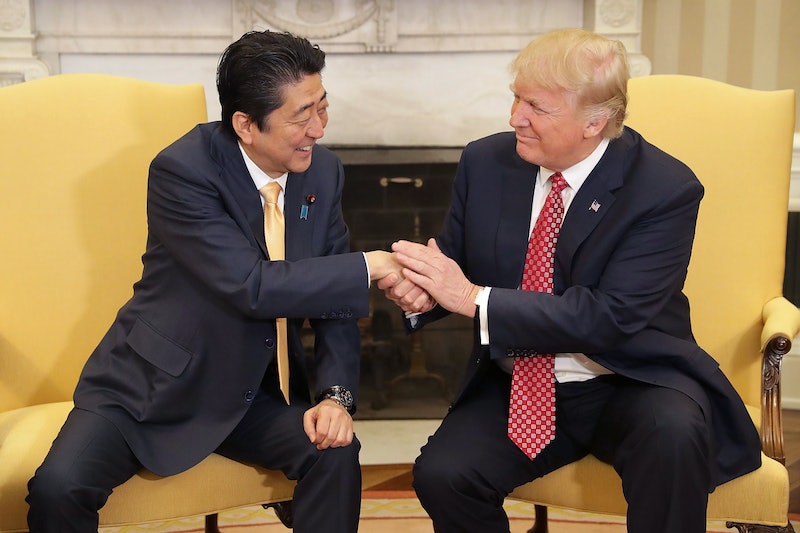 Shinzo Abe was just trying to be polite. The Japanese prime minister met with President Donald Trump Friday — the second in-person visit between Trump and another global leader. Overeager for the opportunity to speak to a world leader and not damage relations between that country and the United States in the process (cough, Malcolm Turnbull, cough), Trump shook Abe's hand rather forcefully. Abe's expression during and after the handshake incident speaks volumes.

Abe is in the United States to smooth things over between Japan and the United States — to build a "relationship of trust," as he told assembled reporters, according to BBC News. The two met at the White House to discuss ongoing economic ties between the countries, which Trump has hinted he he might disrupt. (I know! Shocker!)

So far, all seems to have gone well (of course, "well" is relative here, given that President Trump has so far accused Australia of having done a "dumb deal" on refugees, and criticized Mexico's handling of "bad hombres"). That is, until Trump and Abe shook hands in front of assembled press, and Trump appeared to clutch Abe's hand, pull Abe's wrist towards him and jerk Abe forward in his seat, and then seemingly refuse to let go.

Just in case you thought I was reading too much into it, let's take a look at Abe after the handshake.

Is that an eye roll? A desperate shift away from Trump so that the president doesn't grab another body part of Abe's? A prearranged code for "Please, help me!" to the press and/or his aides?

I'm not convinced we can even describe this as a "handshake." More accurately, it appears to be a "death grip."

Still. As far as handshakes go, it could be worse.