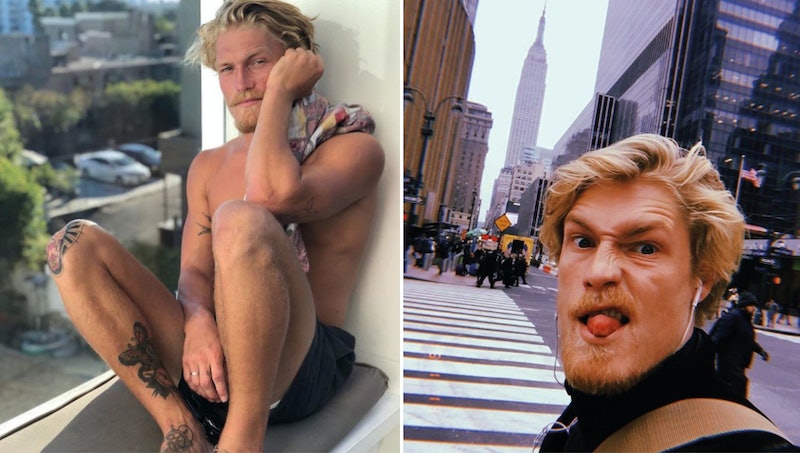 I still miss Love Island. The only downside is it’s on in the few months that we actually get some hot weather in the UK when all I need in the winter months is a little bit of scandal in the sun. However, it looks like the antidote is here. Shipwrecked returns to our screens on Jan. 28 for the first time since 2011 and it promises seriously hot contestants, fiery competition, and plenty of drama. As the promo has been ramping up over the last week one contestant in particular has caught my eye, so I did a little digging. Shipwrecked's Harry Goodwins' Instagram shows that he's an international model that has already worked for some of the biggest brands in fashion. His social media also suggest he spends most of the year on a beach, so acclimatising to Shipwrecked shouldn’t be too difficult.

With a Cambridge graduate, social media influencer, and gal repping the feminist cause, the Shipwrecked contestants look like a seriously interesting bunch. Goodwins is no exception. According to his Shipwrecked introduction video he is a 26-year-old from London, but considers himself to be a bit of a man of the world. Don’t look at his Instagram if you are easily jealous, you’ll get wanderlust. Goodwins seems to have already made pretty big moves in the modelling industry. He said, “I model for the likes of Prada, Calvin Klein, Vogue, GQ…so, so far so good.”

With the whole messy blonde hair, perfect tan, surfer look going on it looks like Goodwins was made for Shipwrecked. Coming across as a bit of a cheeky chappy in all of his promo footage, Goodwins revealed to Radio Times that Shipwrecked actually made him more mature. He said, “I stepped up to the plate to do chores. I think I came across more mature than I actually am.” He went as far to claim that he became the dad of the group.

So, I can hear you asking already, has Goodwins got a partner back home? Because I know there is no chance I am going to be able to watch him and not fall a little bit in love. Well it turns out no, he is very much single. In fact he went so far to say in his introductory video, “at the minute we are a single pringle and ready to mingle.” Not that I knew people still said that, I am very much here to see how Goodwins stirs the pot in his look for island love. But I can’t see him getting distracted too easily as he announced “if I have got to play dirty I am happy to do so.” This boy has got his eyes on the prize.

Speaking about the return of Shipwrecked in a press release the Controller of E4, Karl Warner said, “Shipwrecked changed the game, and we’re very excited about the new series that confidently shakes up reality TV once again. Thanks to the amazing creative team behind the camera, a diverse cast of characters and the brilliant talents of Vick Hope, the new series has all the ingredients for a fresh blast of sunshine and surprises to kick off a hugely exciting year ahead on E4.” I can't wait to see Goodwins and the other contestants in action either.

Since it seems Goodwins feels comfortable just about anywhere his travel experience should set him up well for the competition that will commence on Shipwrecked. The battle kicks off on Jan. 28 at 9 p.m. on E4. If you have been looking for your Love Island fix this might just be the thing you need.