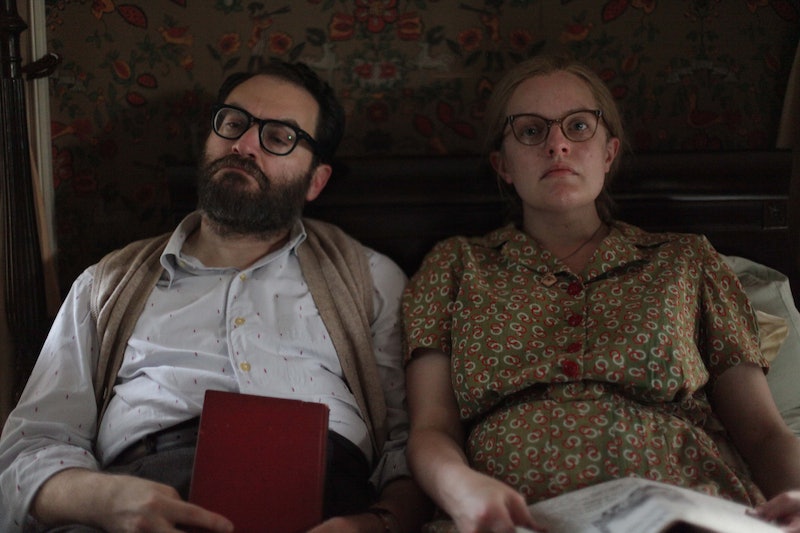 Author Shirley Jackson struggled her entire life to be taken seriously in her profession. As a writer, wife, and mother in the 1950s and '60s, when the expectation was that she just be a housewife and mother, Jackson continued her passion and published six novels, two memoirs, and more than 200 short stories. In her husband Stanley Edgar Hyman Jackson seemingly found a partner who was supportive of her writing career — a rarity at the time. But the new film Shirley, available June 5, dives deeper into Shirley Jackson and Stanley Hyman's relationship, making the argument that while Hyman supported Jackson's career, his philandering and misogyny may have contributed to her misery.

Directed by Josephine Decker, Shirley stars Elisabeth Moss as the titular Shirley Jackson, the famed writer of horror and thrillers such as The Haunting of Hill House and the popular dystopian short story "The Lottery." The screenplay, written by Sarah Gubbins, was based on the 2014 novel Shirley by Susan Scarf Merrell. A work of fiction based on true events, it notably eliminated Jackson and Hyman's four children from their life, and fabricated a young couple, Fred (Logan Lerman) and Rose (Odessa Young), who come to live with them for a short time. Though Shirley depicts their partnership as a semi-playful one, Jackson and Hyman's relationship in real life was a little less jovial.

While Hyman was supportive of Jackson's writing career, his cheating and misogyny likely contributed to her mental health issues. Jackson and Hyman met at Syracuse University; Jackson's first published short story had been printed in a college magazine and Hyman, according to Electric Literature, "Closed the magazine demanding to know who Shirley Jackson was. He had, he said, decided to marry her."

Jackson, The New Yorker writes, "Had already begun to experience the anxiety, depression, and 'fears of people' that plagued her throughout her life, Hyman seemed a savior: a brilliant man who didn’t think she was ugly, who understood her and loved her, who believed in her promise as a writer."

Though through their partnership Jackson wrote humorous essays on motherhood and marriage for magazines like Good Housekeeping and Woman’s Home Companion to make money, her home life wasn't as giddy and raucous as those stories would claim. Probably contributing to Jackson's misery, Hyman maintained a "principled insistence on sleeping with other women. He also expected Jackson to listen good-naturedly to accounts of his sexual adventures."

Jackson was also expected to keep up the image of the good American housewife of the time. "Hyman’s lordly expectations of what he was due as the family patriarch were retrograde, even by the standards of the time. Jackson did the cooking, the cleaning, the grocery shopping, and the child-rearing; he sat at his desk, pondering the state of American letters and occasionally yelling at his wife to come and refill the ink in his pen."

Shirley taps into these stories by including Hyman's philandering, but the housewifery expectations are cast off on the fictional character of Rose. In that sense, Shirley doesn't touch nearly as much on Hyman's mental and emotional torment of Jackson, but instead positions the two as sparring partners in a battle of wits with the newlywed couple living in their house.

Even this elimination, however, doesn't negate the fact that Jackson was an accomplished writer at a time when women were expected to stay home and take care of the kids. She did that too, while writing some of the most influential fiction of the era.

More like this
Your Guide To Watching 'Everything Everywhere All At Once' In The UK
By El Hunt and Sophie McEvoy
Here's How Netflix Should Adapt Prince Harry's Memoir Into A Movie
By Ginny Hogan
Jessica Simpson On The Time She Was Pursued By A Backstreet Boy & An *NSYNC Member
By The Editors
We’ve Entered The Hot Boy Reader Era
By Samantha Leach
Get Even More From Bustle — Sign Up For The Newsletter
From hair trends to relationship advice, our daily newsletter has everything you need to sound like a person who’s on TikTok, even if you aren’t.