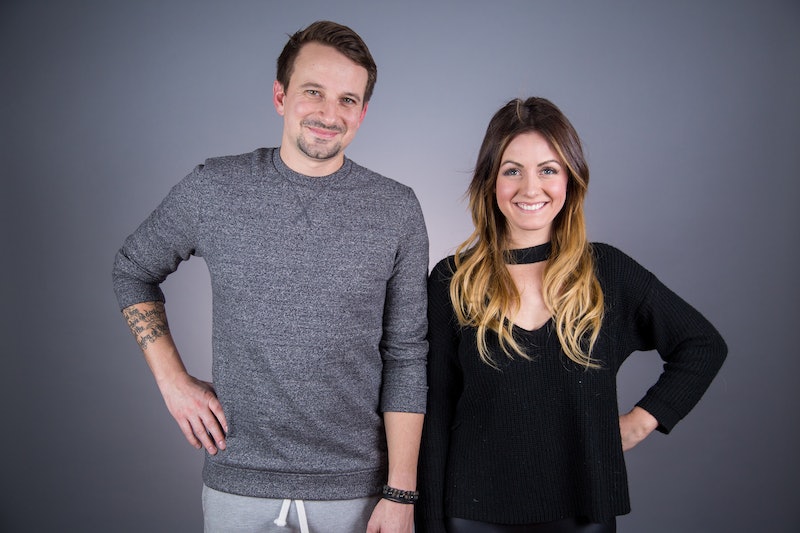 Over the course of Nick Viall's season of The Bachelor, Bachelor in Paradise couple Carly Waddell and Evan Bass will contribute weekly articles to Bustle about their friend's own journey to find love. Read their take on the hometown dates below.

Phew. You ever watch a two-hour Bachelor episode and feel like you’ve just marathoned 10 seasons of a Netflix show? That was Monday night as viewers traveled all over North America (including Canada) to meet the wonderful Bachelor women’s families. First, we discovered that the holiest land in all of Hoxie, Arkansas is on top of a silo. Then, Nick grappled with tough subjects like what is okra during Rachel’s hometown. And, we finally met Raquel during Corinne's hometown and traveled to Canada for Vanessa's. Carly will recap the episode below, but the most interesting thing about these hometown dates was that Nick asked permission from all four dads to marry each of their daughters. In this wacky and surreal Bachelor world, I am proud of Nick for going for it! I’m glad he found different ways to ask each father, so that it was still special for each woman. But, since Carly and I joked about the subject in last week's column, I’d like to tackle the topic of whether a man still needs to ask his girlfriend's father for permission to marry. I'll get to that after Carly's recap.

After sending Kristina home, Nick gives the remaining four roses out while sitting on the couch instead of at a rose ceremony. Raven, Vanessa, Corinne, and Rachel get hometowns.

Raven takes Nick climbing on what is known as a “secret and sacred place..." aka to the top of a grain bin, when a cop shows up. The cop is her brother. Then Raven and Nick go four-wheeling. And they “get dirty” in some mud.

Once they head to her home, they learn her dad is cancer free. There are a lot of tears and hugs as Raven tells her parents how much of a wonderful influence they are. She says “life is short” and she needs to do “what makes her happy" and Nick makes her happy. Raven also says that Nick's first impression was so different than what she originally thought about him, which her mother agrees with. Raven says her whole mindset about Nick has changed since she got to really know him. She then tells Nick, “I think I should tell you that there is no hesitation on my end of what comes of this,” but Raven can’t say “I love you,” 'cause she doesn’t want to show weakness and is scared. She already blurted it out earlier in the season, so she’s obviously getting the whole “this is getting real” feeling when it comes to really saying it, and, on the other hand, she is also scared that she will go home if he doesn't know that she REALLY is IN LOVE with him.

Rachel’s first adventure with Nick in Dallas is taking him to a predominately black church. She wants to make sure he can handle it, but faith and church were a big part of Nicks life growing up, and he assures her that "amen is amen." Rachel says she is definitely searching for her family's approval, which is what she needs to REALLY fall in love with Nick. We meet Rachel’s family, including her eldest sister who is also in an interracial couple.

As much as these conversations revolve around race, they all circle around to how much Rachel and Nick are falling for each other and how much they see the beauty in each other as people. Rachel’s mom compares Nick to Rachel’s dad, and that is all the approval that she needed. Clearly these two are destined for marriage... *cough*

Corinne decides to take Nick shopping to show him an “ordinary day in the life of Corinne." Bottom line, Nick cannot afford Corinne. Nor can any man…Except her dad.

But that's OK, because Corinne doesn't mind being the breadwinner. Nick looks hot in the clothes she chose for him, and “Corinne” fronts the bill. The $3,000+ bill (for one outfit) doesn’t make Corinne flinch, but Nick gets hives when hearing the total amount. Corinne takes Nick to lunch and says “I love you” which makes her feel like that moment “was like a movie.” Well it’s no movie but it is definitely a TV Show. They kiss. On to FINALLY meeting the nanny Raquel, who is lovely (so, take that, everyone who made fun of her). Corinne’s dad is worried that Corinne won’t be happy with “all the things money can’t buy” but she assures him that she will be. The family's conversations mostly revolve around Nick’s finances and if he can provide the lifestyle Corinne is used to.

Vanessa takes Nick to meet her special needs students, which is so sweet. Nick and Vanessa share memories from their time together by making a scrapbook with the kids. Nick gets her students' approval. Vanessa's divorced family is split up in two visits. First we start at the mom’s side of the family. The biggest discussion here is along the lines of "where are you guys gonna live?” and “you live in two different countries,” and “have you discussed this?" The family is concerned they haven’t had the BIG conversations about location, which is a BIG factor with a super close family and a wonderful job Vanessa doesn’t want to leave. Nick cries, Vanessa cries, Brother cries, Sister cries, Mom cries. Emotions are running high. Nick asks for Vanessa's dad's blessing. Her dad gives the blessing, but only after Nick admits that he asked the blessing from previous fathers also. Vanessa hears that Nick asked for multiple parents’ blessings, so now she is concerned that Nick doesn’t know where his head is at and feels less special.

From there, we are left in NYC for the next rose ceremony. But, before it begins, Andi (the former Bachelorette) knocks at Nick's door, and he pours her a drink...

OK, so a bunch of y’all weighed in on whether or not I should ask for Carly’s dad’s permission/blessing to marry his beautiful, amazing girl. Apparently, the overwhelming majority of people still believe in the time-honored tradition. But, more and more young people are breaking away from those types of customs. I was raised in a conservative home (Carly too), so I completely respect the idea behind paternal permission — but, recently, Carly and I have been sort of deconstructing our belief systems and finding our own paths in a way that’s a little different then the way we were raised. In fact, many of our talks in Paradise revolved around spirituality and religion. So, tradition has been something we've been challenging in our lives. I could've called Carly's dad by phone — in fact, Jordan Rogers set a Bachelor precedent by asking JoJo’s dad that way vs. in person — but it felt weird for me to do that because I had never met the man. Remember, Paradise has no hometown dates (WTF), and I didn’t want our first interaction to be a forced coercion.

Still, the question remains: To ask or not to ask? Carly and I have been engaged for eight months (real time). Is it even necessary to do it now? But, after wrestling with this for months, Carly's come to the realization that it is important. For me, that is what matters.

If Carly values that tradition, then so will I. Even if it’s not a big deal to me, it is important to honor the things my future wife does value, because marriage is the coming together of two equals sacrificing a separate life for a lifetime adventure filled with compromise and companionship. So how do you think dads feel about FaceTime? Asking for a friend...