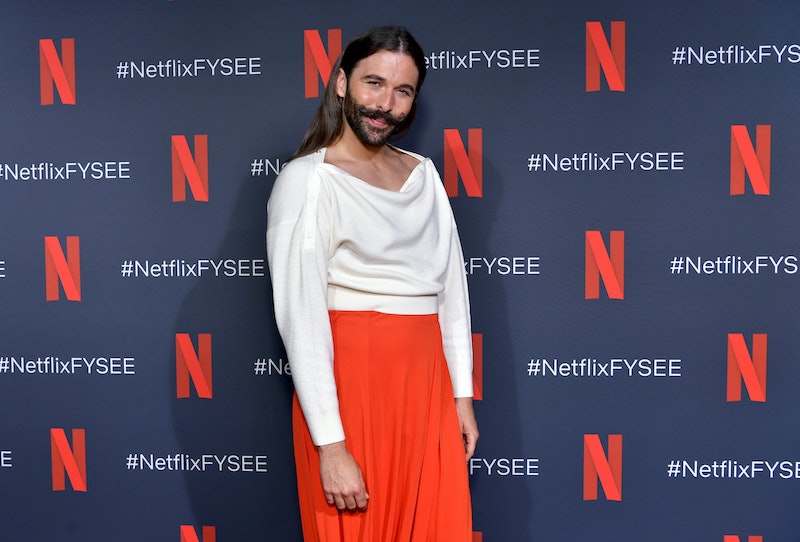 In a New York Times interview published on Sept. 21, Queer Eye's Jonathan Van Ness revealed he's HIV-positive and how he talks about it in his forthcoming memoir, Over the Top: A Raw Journey to Self-Love (out Sept. 24). JVN recalled that at 25 years old, he fainted in a salon, and, after visiting a Planned Parenthood clinic the next day, he tested positive for HIV. “That day was just as devastating as you would think it would be,” he wrote in his book, per NYT. He further explained that he's now healthy and also described himself as an out-and-proud “member of the beautiful H.I.V.-positive community.” (JVN identifies as nonbinary and prefers he/him pronouns.)

Although JVN said in the NYT interview that he's been "scared to be this vulnerable with people," he felt compelled to share the deeply personal revelation to bring attention to and dispel misconceptions about being HIV-positive.

“When Queer Eye came out, it was really difficult because I was like, 'Do I want to talk about my status?,” he added to the newspaper. "And then I was like, 'The Trump administration has done everything they can do to have the stigmatization of the LGBT community thrive around me. . . . I do feel the need to talk about this."

Following the NYT article's publication, JVN further opened up about his transparency in an Instagram post on Sept. 21, writing:

"Having the opportunity to write my book and share my story with you is the most important opportunity I've ever had. The first article about the book came out today from the @nytimes & I'm relieved I can speak fully about the things that shape my experience in life. The book speaks to some extremely difficult times but it's also filled with my humor, joy and voice & I can't wait to share it with you fully. Thanks so much for your support so far, it means the world."

Among his famous supporters were Queer Eye castmates Antoni Porowski Tan France, and Bobby Berk. "Love you proud of you ❤️" Porowski commented under the post. Added France, "LOVE YOU, JACK!" Finally, Berk wrote, "Love you baby boy. So proud of you ♥️♥️♥️♥️"

The love also flooded Twitter, with GLAAD thanking JVN "for speaking openly about living and thriving with HIV." Several fans also expressed their appreciation for his bravery. "So proud for @jvn kicking the stigma still surrounding HIV," one user tweeted. "This lady has pulled it together to be come an inspiration to many and a paragon of positivity and humanity." As another wrote, "I cannot emphasise how important it is to have queer men on TV like @jvn and to dispel misconceptions of what it is like to be a person living with HIV."

Other supporters noted their own struggles, especially within the LGBTQ+ community. One user referenced his own recovery, calling JVN "a beacon of light for so many." Another tweeted: "I think many queer people see aspects of their own lives in @jvn’s struggles, myself included. opening up is tough, but it makes a difference!"

Other emotional issues JVN feels "need to be talked about” and will discuss in his book, as noted in the NYT article, include: a childhood sexual abuse by "an older boy from church" which led to "self-destructive behaviors" like overeating, having sex for money, and drug addiction. JVN wrote in his memoir that in his early 20s, he went to rehab twice and relapsed both times.

"These are all difficult subjects to talk about on a makeover show about hair and makeup," he explained to NYT. "That doesn't mean Queer Eye is less valid, but I want people to realize you're never too broken to be fixed."

Given JVN's brave candor, that seems to be the message he has conveyed.