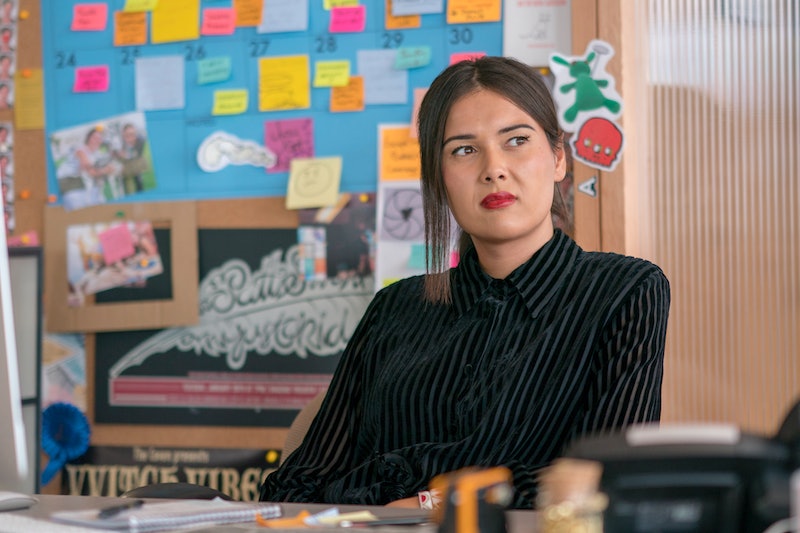 Five minutes into my phone call with comedian Patti Harrison and it's already gone off the rails. It's all thanks to a very polite tirade against kale. "It’s nature’s knives," Harrison tells me, before claiming Goop is probably to blame — and also to thank — for Big Kale's reign of digestive terror. "We have to trust Gwyneth, we have to. She has a larger plan," Harrison says. "All the women she’s having put bee venom on their vaginas to rejuvenate it, I’m sure there’s a real heaven at the end of that."

By the six-minute mark, it's clear why Aidy Bryant hand picked Harrison to play the unhinged receptionist and scene-stealer Ruthie on Hulu's Shrill. Harrison is very good at selling the absurd. Whether she's singing the "earnest" song she wrote for Dua Lipa or questioning Kirstie Alley's Twitter tribute to Stephen Hawking as the co-host of Comedy Central's new webseries Unsend, her gentle and measured delivery helps sell the most bizarre of line readings. This is especially true on Shrill, a very down-to-earth comedy about Bryant's Annie, a fat woman learning to love herself inside and out.

Harrison is so good at being absurd, it's almost a problem. (See: her YouTube reviews of exotic animals.) It's hard not to get sidetracked when she veers off on hilarious tangents having to do with her (fake) illiteracy or her (fake) boyfriend Mel Gibson. ("You’re OK to write that I’m dating Mel Gibson and we’re in a very intense and sexual romantic relationship," she says apropos of nothing.)

Harrison's so good, she's actually concerned her sarcastic interviews are going to get her in trouble. Specifically, she's worried about a joke she made in a recent interview about her acting approach in which she said she likes to throw away the script and make up her own lines. For the record, she doesn't do this, but on Shrill, she did have fun ad-libbing. "I get to pop in and say absolutely insane things," Harrison, says, echoing Ruthie's M.O.

Harrison's favorite insane thing Ruthie says happens in Episode 2, when she aggressively asks Annie and her work BFF Amadi (Ian Owens) if they know what 69ing is. In the hilariously awkward scene, Annie tries her best to explain the sex act, but it's Ruthie who offers up her own succinct definition: "It's a double suck, best done standing up."

"Aidy was improvising a lot. She’s obviously like the top-echelon funniest person, razor sharp, so it really was so much fun to shoot that," she says about the off-the-cuff line. "They made it such a positive experience to be on set, which is not an experience I’ve had before."

While filming other projects, Harrison, who is trans, says she's experienced "full meltdowns" after dealing with the hair and makeup teams. "I have body dysmorphia and I’ve had it my whole life," she says of the mental disorder where one focuses obsessively on a perceived flaw, "and it’s really intense at times and it doesn’t help to have people who are professionally telling you what doesn’t look good about you."

With Shrill, for the first time she had a say in how her character looked. It's a life-changing experience she says she owes to the women at the top: Bryant; showrunner Ali Rushfield, and Lindy West, who's an executive producer and writer on the project, which is based on her 2016 memoir, Shrill: Notes From a Loud Woman. "They really wanted you to say if you felt uncomfortable with something, it was such a relief," Harrison says. "They equipped me with confidence to speak up that I hadn’t felt before."

That leadership strategy makes sense for a show that is all about a woman learning to unapologetically take up space. Harrison's experience playing Ruthie, who isn't openly trans on the Hulu series, has made her think about the space she wants and doesn't want to occupy as a trans woman in Hollywood. "I don’t want to make a show about me living in Ohio as a boy and then coming out as a girl where people are like standing up off their couch and clapping," she says.

It's possible that's how some people saw Harrison's 2017 viral Tonight Show monologue about President Donald Trump's transgender military ban, which began "Donald you're so stupid. You're lucky you're hot." It was an instant hit, gaining her new followers, some of whom assumed she was a political comedian. In reality, Harrison is an absurdist who spends her time trying — and unfortunately, failing — to get free flights from Delta and cast in the movie version of Cats.

Harrison wants to continue in that direction, making people laugh with humor that "doesn’t necessarily have to do explicitly with being trans, but in a way it does," since all of her jokes come from her life. And yes, trans women's lives are funny despite what you might see on TV. "A lot of times in an industry where everyone who’s writing TV and movies [is] cis they have a hard time finding authentic humor in a trans character." Harrison wants to change that. "I want to be able to make things that people who don’t have to address their identity all the time make."

Harrison, who also writes for Netflix's Big Mouth, hopes that if Shrill gets a Season 2, fans will to get to know Ruthie better. "I ad libbed at one point that I was a veteran," she says. "So, maybe she’s the perfect killing machine but she can’t serve because she’s trans."

She'd also like to start pitching her own TV show. But first, she'd like to find a buyer for her movie, E.T. by Katy Perry featuring Kanye West. "Get this, it’s a reboot of the movie E.T. starring Katy Perry," Harrison says. "She plays E.T." She's joking, I think.