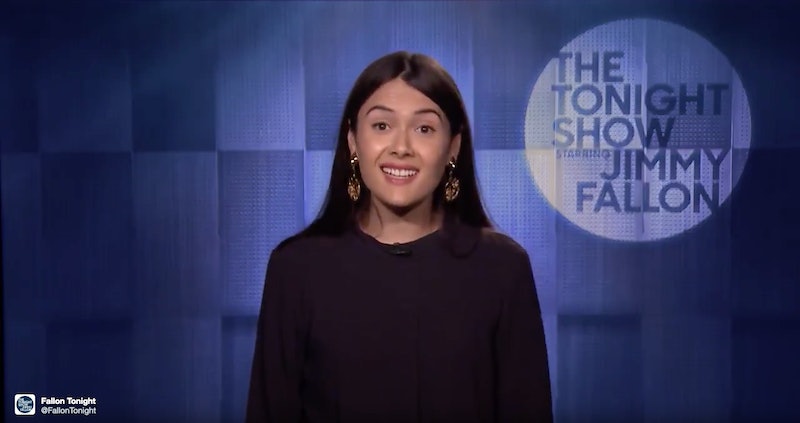 'The Tonight Show with Jimmy Fallon'
By Katherine Speller
July 27, 2017

News has been decidedly grim on Wednesday following a multi-tweet announcement from President Donald Trump that transgender individuals will no longer be allowed to serve openly in the military. Luckily though, Americans had something to smile about later on Wednesday night when Tonight Show correspondent, transgender woman, and comedian Patti Harrison roasted Trump and his ban in a short but hilarious segment.

In a rapid-fire two minute clip, Harrison managed to take aim at just about every part of POTUS' life, his baffling ban, and the questionable logic around it.

First, she started with a comfy jab at his ego:

She also covered how unsurprising it was to see a bigoted, anti-trans move come from his administration:

When I saw the headline this morning at first I just read, ‘Donald Trump Bans Transgender people.’ And I was like, ‘yep, sounds like him.' But then I realized it was just in the military and I was shocked — because I assumed he already did that.

From there, Harrison said that while she doesn't have any personal interest in serving in the military, it should obviously still be a right for trans people:

It's like, I don't want to go to your baby shower, but I want the invite.

Though, she still had a few more jokes about Trump's questionable knowledge of the nuance of gender and the experiences of trans folks. At one point, she wondered if Trump even knows "what transgender means" and posited that he might think they were "those cars that turn into robots."

Then she really brought it home/took us all to church with a shout-out to trans military heroes (like Kristin Beck) in the same breath as an absolutely flawless (and scathing) read of Trump's behavior:

I want to say that there are amazingly brave trans people who should be allowed to serve, like Kristin Beck, a retired Navy Seal with a purple heart, bronze star and countless service medals. And yet Trump says transgender people in the military would be a "tremendous disruption" – and I get it. If you constantly draw attention to yourself, spend all day distracting everyone, and cost tax-payers millions of dollars, the perfect job for you isn't the military— it's the president of the United States.

Since we all need to laugh a little as we fight against bigotry, Harrison's jokes couldn't have come at a more perfect time.