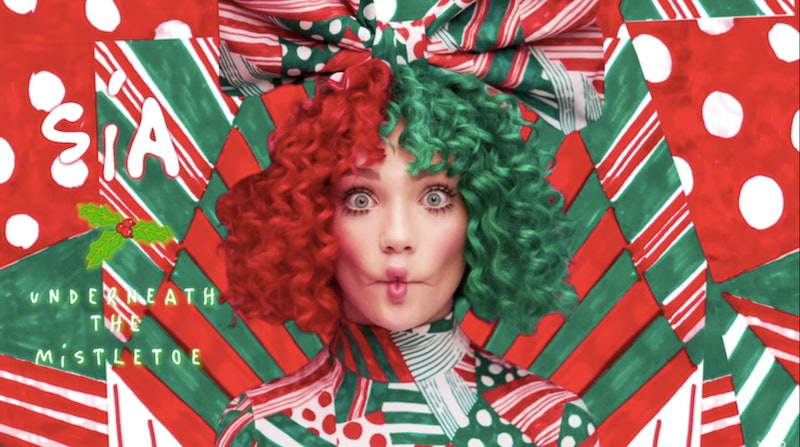 It goes without saying that the holidays are a time of reflection, love, and joy for most. As the decor and ambiance of the season officially gets underway, Sia’s new song “Underneath the Mistletoe” could be the new Christmas ballad you never knew you needed. It's not necessarily the upbeat song you may be used to, but it's still powerful on its own. While it's no traditional "Silent Night," Sia's "Underneath the Mistletoe" lyrics will help you get right back into the yuletide mood of affection.

The song details a strong personal connection with someone that Sia has been longing to see. You can feel the excitement as the singer waits for the arrival of the person, who, for one reason or another, she has been separated from. As she sings in the first verse,

I wanna know ya"

It is unclear whether that separation happened because of unrequited love or if it's just one of the pitfalls that comes with long distance love; the matter seems to be left up to self-interpretation.

Though Everyday Is Christmas is her first Christmas album, Sia's past lyrics have often spoken of difficult romances, and the narrative of "Underneath the Mistletoe" appears to be no different. In this particular song, the songwriter accurately depicts the sadness of being away from someone she has strong feelings for, although some ambiguity remains about whether or not the other person shares those same sentiments. Especially since she refers to them as "a crush."

"Run to me, run to me through the white night

Cos I adore ya

Run to me, run to me through the white night

I'm waiting for ya

It's Christmas time, so run for your life

A snowy night, a woman on fire

I'm waiting for ya

So here we go under the mistletoe

A snowy night, a woman on fire

The chorus sees the performer seemingly elated that she will get to spend time alone on the holidays with her presumed bae.

"You and me here, underneath the mistletoe (oh)

The song easily showcases Sia's indisputable knack for songs that can captivate masses of mainstream listeners. That said, it's highly likely that "Underneath the Mistletoe" and other offerings from this new album could very well to go on to become mainstays on your yearly holiday playlist. Although there's plenty of traditional Christmas music that's reigned supreme with listeners for decades, it's worth noting that there have been quite a few contemporary artists who have struck gold with original holiday compositions that have managed to remain popular with fans on an annual basis.

Perhaps the more widely-recognized of those seasonal hits is Mariah Carey's "All I Want For Christmas," which became an instant classic upon its release in 1994. Then, there are tuneslike Kelly Clarkson's "Underneath The Tree," which spent four weeks at No. 1 on the Adult Contemporary Chart in December 2013 and the first week of January 2014; Ariana Grande's "Santa Tell Me," which peaked at No. 7 on Billboard's Adult Contemporary chart in late December 2014; and Justin Bieber's "Mistletoe," which peaked at No. 11 on the Billboard Hot 100 singles chart in December 2011.

As for why Sia's jumped into the business of holiday music, Billboard reported that Sia cited a lack of satisfying holiday music in the industry. She explained to DJ and producer Zane Lowe,

"I thought we had a bit of a shortage of good Christmas music. There's obviously the classics and stuff, but anything new, I wasn't vibing that much on it."

She also revealed that she penned the entire Everyday is Christmas album in just two weeks and "ended up with an original album by accident" because of free-flowing of obvious topics associated with the holiday season like, "Christmas, mistletoe, ho-ho-ho, Santa Claus, Christmas list, elves."

It goes without saying that you'll want to be properly equipped with tunes that feed both your energy and soul this holiday season. If festive mood music is what you're going for, Sia's "Under The Mistletoe" is officially here for you.

More like this
Who Is Betty Who Dating? The Australian Singer Is Married To Her Tour Photographer
By Radhika Menon
Kim Kardashian Father’s Day Tribute To Kanye West Called Him “The Best Dad”
By Stephanie Topacio Long
Dan Levy’s Father’s Day Pic Of Dad Eugene Spoofs The ‘Schitt’s Creek’ Vet’s Past
By Grace Wehniainen
Prince William & His Kids Are Adorable In A Smiley New Photo For Father’s Day
By Stephanie Topacio Long
Get Even More From Bustle — Sign Up For The Newsletter