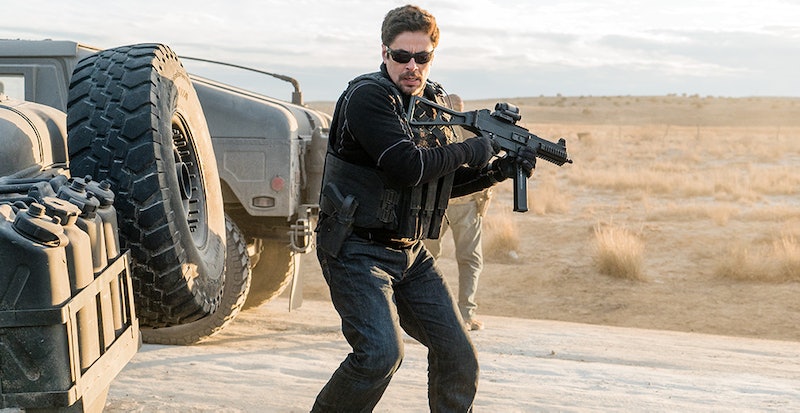 Sicario: Day of the Soldado has to be one of the most unexpected sequels in recent memory. Although 2015's Sicario was a surprise hit and received loads of acclaim, the intellectual crime drama/action film didn't exactly scream "franchise." And yet, here we are, with its sequel earning a prime summer blockbuster release date and expected to do big business at the box office. So does that mean there will be a Sicario 3, or is this sequel simply a one-off anomaly?

Although nothing has been confirmed yet by the studio, the plan is definitely for the Sicario franchise to move forward with a third installment, and that's been the case since 2016. Sicario was released in June of 2015, and it became a surprise hit with critics and audiences alike. Even more surprising, though, was how quickly Lionsgate announced the film's sequel, greenlighting the project in September of that year, according to Variety. And although the studio has yet to confirm Sicario 3 — partly because Sicario 2 hasn't even premiered yet — the film's producers had already revealed that a third movie was in the works before production even began on Sicario 2. However, the plan isn't for a traditional movie trilogy, but rather for three films that tell different stories within the same universe.

Stefano Sollima, who directed Sicario: Day of the Soldado, revealed in June of 2016 that a third film was being discussed that would be different in scope from both his film and Denis Villeneuve's Sicario. "The idea is to make three anthology movies with some of the core actors and in the same world," Sollima told The Independent's Jacob Stolworthy. "The reason that I love [Soldado] is because it's not exactly a sequel; it's something you can catch and enjoy even if you haven't watched the first one."

The producers and writer of the first two Sicario films have also discussed a potential third film, with increasing frequency as Sicario 2's release date draws nearer. Producer Trent Luckinbill told Screen Rant's Dan Zinski in June of this year that fans can "absolutely" expect a third Sicario film. "We were so thrilled that people responded to the first one and we felt justified in making a second because we loved it," Luckinbill said. "We probably are the biggest fans of the movie. And we feel that way again (with the sequel). Obviously, even more than the first one, we kind of leave off a little teaser at the end ... I think we'd like to do that now. I certainly feel like the second one lived up to the expectations."

Luckinbill also talked recently with Cinema Blend's Conner Schwerdtfeger, and revealed that discussions are happening with screenwriter Taylor Sheridan about what Sicario 3 will look like, and it may involve bringing back Sicario star Emily Blunt, who does not appear in Sicario 2. "I think Taylor certainly has some ideas about all of that, but we're open to that world and certainly would love to bring Emily back," Luckinbill said. "We haven't written the script yet, but yeah it would make a lot of sense. We're all fans of the movie, we've all come to the same conclusion, which is 'It would be great to see her again.' So I think we're striking up those conversations now."

It certainly sounds like all of the creatives involved in the Sicario franchise are pretty gung-ho about making a third movie, and the ball is in the studio's court as to whether or not it will actually happen. But as long as Sicario: Day of the Soldado isn't an outright bomb at the box office, odds are that this action-packed and tense franchise will keep on rolling in the future.

More like this
What’s New On Netflix: 'Never Have I Ever' & 'Indian Matchmaking' Return
By Arya Roshanian
At 14, Rachel Sennott Had A Sexual Awakening While Reading 'Twilight'
By Samantha Leach
Jamie Foxx Revealed The Question That Got Cameron Diaz To “Un-Retire”
By Grace Wehniainen
How To Stream 'Bodies Bodies Bodies'
By Morgan Leigh Davies
Get Even More From Bustle — Sign Up For The Newsletter