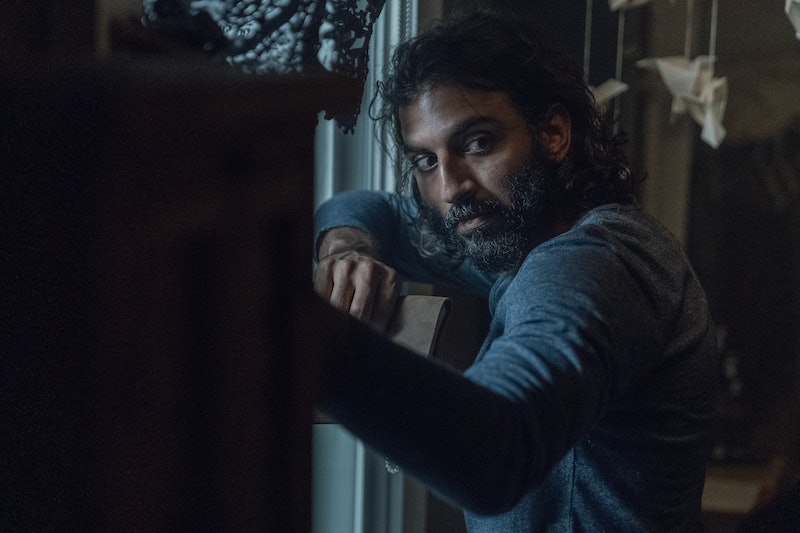 Spoilers ahead for The Walking Dead Season 10 midseason finale. Not every significant character on The Walking Dead gets the chance to return as a zombie. But in the past, Shane, Sophia, Merle, and even Hershel's head have had pretty epic zombie comebacks and after his Walking Dead death, Siddiq joins their ranks. "I feel like becoming a walker is kind of how this show gives you a chance to finally put all the work behind you and just say goodbye. It's weirdly cathartic," star Avi Nash tells Bustle via email. "It's kind of like, 'OK, no more lines for you. You did good, kid. Now just snarl, growl, and try and eat a brain!'"

Yet, the brain Siddiq wanted to eat belonged to none other than his baby daughter Coco. Thankfully for Walking Dead fans, the reanimated corpse didn't succeed, but it was not for want of trying — on both zombie Siddiq and Nash's part. "I remember joking on the day that we should throw in a quick rewrite because if I could get to my own child, then the cast wouldn't have to contend with filming another baby," Nash says, explaining babies and animals can understandably be difficult to work with on TV sets. "But it was pretty much unanimously decided that that was way too dark. Siddiq is betrayed, murdered and then he eats his own child?"

Plus, he made sure to add the twin babies who play Rosita and Siddiq's daughter are "actually extremely cooperative." Nash adds, "So I guess it all works out, and a little piece of Siddiq survives forevermore as Coco!"

Besides living on through his biological daughter, Nash believes his character should be remembered for the humanity he displayed from when Carl found him in the Season 8 premiere, "Mercy," to even after he witnessed the massacre of his friends at the Kingdom fair. But Nash does admit that Siddiq began to question his worldview as he experienced PTSD following the fair in Season 10.

"I think he started to have doubts about whether mercy and compassion were really worth it. I'm sure he thought about revenge, or even just giving it all up and heading back into the forest where Carl found him. Forgoing his friends and family so that he could no longer be a danger to anyone (especially Coco) and just live out his nightmare alongside his demons," Nash says. "But he ultimately chose family, he chose to open up about his trauma, and he chose to fight back to try and rebuild himself."

Nash noted after his character's death on Talking Dead that he researched PTSD to accurately portray what Siddiq was going through. "If Siddiq's tragic end does anything, maybe it compels [audiences] to view PTSD in a different light and start a discussion," Nash tells Bustle. "After all, it was in sharing his trauma that Siddiq started to recover and I think the great tragedy is, had he not been killed by Dante, he was on his way out of the hole."

On his Talking Dead appearance, Nash appropriately shared the couch with Chandler Riggs — whose character died by bringing Siddiq into the communities. Nash was emotional at saying farewell to The Walking Dead, but he also recognizes to Bustle how far his character came in just two seasons on the AMC series. "I know it's tempting to just say he became Alexandria’s doctor, but I hope people give him more credit than that," Nash tells Bustle. "He started as a stranger in Season 8, but maybe fans will remember him with the same fondness they do Glenn and others now that his time has ended."