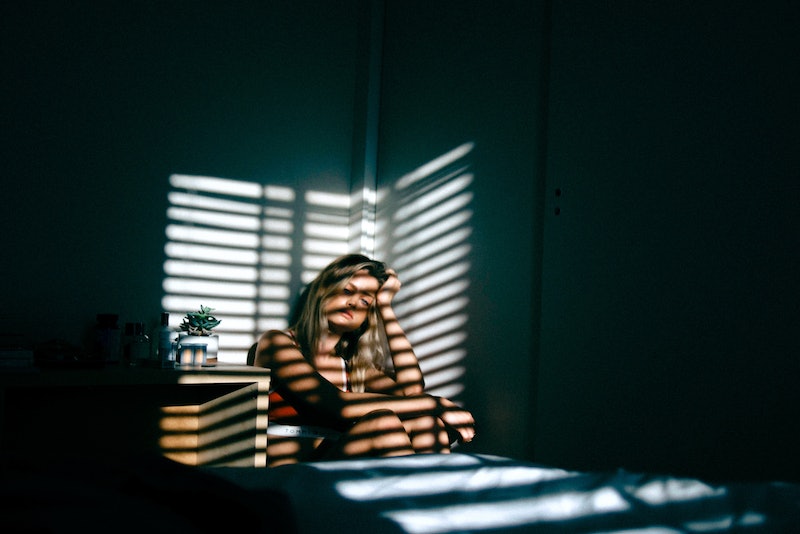 There are so many things to consider when you're choosing which birth control to jump into bed with. You have to think about the convenience, the cost, what the side effects will be, and so much more. But have you considered how hormonal birth control might affect your mental health?

Even though there are numerous options out there to choose from, the Pill still takes the top spot for most-used contraception in the U.S. Almost 26 percent of women on birth control are using the Pill, according to a report from the Guttmacher Institute. However, recent research released from Denmark has shown that the Pill may have negative effects on mental health. JAMA Psychiatry published a study surveying 14 years of data for more than 1 million women, finding that women who took progestin-only pills were 34 percent more likely to be diagnosed with depression, and those taking the combined oral contraceptives (estrogen and progestin) were 23 percent more likely to become depressed. The rates were even higher for teens on the Pill. The combined contraceptive made teenagers 80 percent more likely to suffer from depression.

Although they don't tell the whole story, these are frightening numbers that force us all to take a long, hard look at how contraception is truly affecting our mental health. Julie Holland, MD, psychiatrist specializing in psychopharmacology and author of Moody Bitches, tells Bustle that it's common to see women mentally affected by their birth control. "Many of my patients find that they cannot tolerate how emotional the Pill makes them," Dr. Holland says, "and after trying several different brands over the years, they abandon the idea of using oral contraception for birth control."

If this sounds familiar, read on for the signs your birth control is messing with your mental health, and see if it's time to have a conversation with your OBGYN about making a contraception change.

Your Mood Swings Are Extreme & Feel Out Of Control

Out of all the PMS side effects, mood swings are probably one of the most common (and most dreaded). You feel irritable and short-tempered, and it doesn't take much to set you off. Dr. Holland says your birth control has the possibility of making your mood swings much, much worse — to the point where you're crying for no reason, you feel terrible about yourself, or you're unable to enjoy life.

"Synthetic progestin is horrible for your mood, and about 10 percent of women really can’t tolerate it at all," Dr. Holland tells Bustle. "For these patients, the Pill is destabilizing." She's heard many patients say these exact words: "The Pill made me crazy." As soon as you cross over into territory where you feel like you're totally out of whack emotionally, that's when your mental health has been compromised.

The Pill contains both estrogen and progesterone, which tricks the pituitary gland into thinking it's already ovulating so the follicle won't release an egg. It's the estrogen that could have an impact on your mental health. "Estrogen and serotonin regulate each other in a complicated dance," Dr. Holland says. "Anything that affects estrogen is going to have an impact on serotonin."

The inability of serotonin to reach its receptor sites has been linked with depression, but it's also been connected to excess anger, which can manifest itself in various personal relationships. If you and your SO simply can't get along when you're PMSing, and the level of bickering has reached an Olympic degree, it could be a sign that your mind isn't functioning at its healthiest state.

You Feel Depressed When You PMS

The hormonal shifts you experience in the days before your period will naturally leave you feeling emotionally sensitive, less confident about yourself, and downright moody. This is all pretty normal. You should be concerned, though, when these side effects turn from uncomfortable feelings to depressive symptoms — like being unable to get out of bed, feeling severely unhappy about your life, and significant changes in appetite.

Dr. Holland says many of her patients "are coming to me for complaints of depression, not just PMS." She tells Bustle about another study in which women who had a history of depression overwhelmingly reported worsening depressive symptoms when they were PMSing after they had started using the Pill. If you have a history with depression and you sense a significant shift in how you feel in the days leading up to your period — and especially if you have any suicidal thoughts whatsoever — speak with your doctor about whether there are any alternatives that will help you get your mental health back on track.

Chemical imbalances in your brain can have a strong impact on your everyday life. Dr. Holland says the changes in your brain from birth control can make you feel "a bit bonkers." That might mean you get uncharacteristically angry for no apparent reason or feel like clobbering the person who cut you off in traffic.

"Estrogen causes the manufacture of a serotonin receptor called 5HT2A," Dr. Holland explains. "This is the receptor that mediates the effects of hallucinogens like LSD and is the target of some antipsychotic medications." Nearly a third of women have variations on this receptor, which can present problems when your estrogen levels are high — in other words, when you PMS.

Being bewilderingly angry isn't something you should have to simply put up with. It's likely a sign that your birth control doesn't gel very well with how your brain naturally functions, and it's just time for you to take a different route when it comes to preventing pregnancy.

Just because some studies have found links between birth control and mental health issues, doesn't mean depression will be the fate of everyone on the Pill. However, there is some real evidence here there that can't be ignored. Particularly if you have struggled with mental illness in the past, keep a close eye on how you're feeling, and if something just isn't right in your gut, don't hesitate to bring it up.

"Talk to your gynecologist or your psychiatrist," Dr. Holland recommends. "You can try another Pill." You may also want to opt in for non-hormonal forms of contraception, such as the copper IUD, because Dr. Holland says these "won't affect your mental functioning." There are many different options to choose from. Don't feel like you have to stick with the first birth control option you landed on.