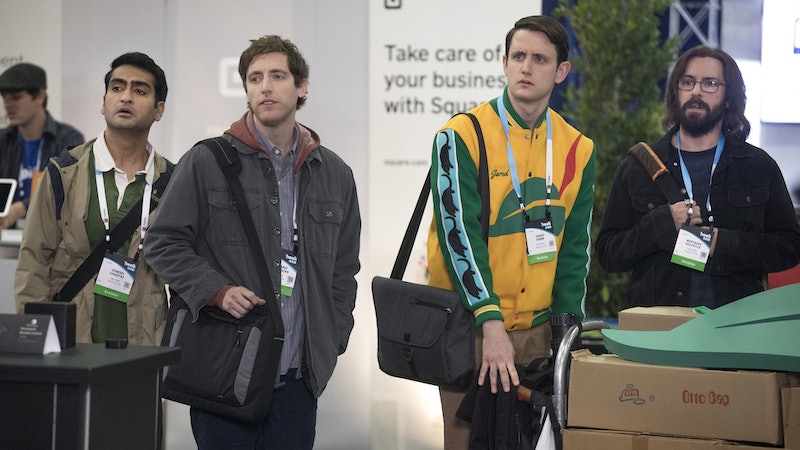 After six hilarious and cringe-worthy seasons, it seems that the journey of Peter Pan and its founders has come to an end. Silicon Valley won't return to TV after the final episode of Season 6 airs on Sunday, Dec. 8, officially wrapping up the story of Richard (Thomas Middleditch) and his friends and fellow start-up employees attempting to build their app into a Fortune 500 company.

The shortened final season, which premiered on Oct. 27, kicked off with Richard having finally achieved success with Pied Piper, attempting to secure new funding for his company and put out fires without his right-hand man, Jared (Zach Woods) by his side. Over the years, the show has skewered tech culture and parodied many of the most ridiculous developments in the technology world, and the final season has been no exception, taking on issues of data collection, a merger between "Hooli" and Amazon and, of course, Mark Zuckerberg's infamous testimony in front of Congress from April.

Still, despite their dedicated fan base and a wealth of material to draw from, the show's creators and executive show runners, Mike Judge and Alec Berg, announced in May that it was time for Silicon Valley to end. "We’ll miss it desperately, but we’ve always let Pied Piper’s journey guide the way, and Season 6 seems to be the fitting conclusion," the pair said at the time, per Deadline. "We are forever indebted to our incredible cast, crew and partners at HBO. At a certain point, there’s only so much we can do to make the world a better place."

Based on the trailer, it looks like the Silicon Valley finale will bring the main cast back together for one last, very panicked hurrah, as Richard, Monica (Amanda Crew), Dinesh (Kumail Nanjiani), Gilfoyle (Martin Starr) and Jared all attempt to solve PiperNet's problems before the big launch of their Hawaii project. It seems that no matter how much success Richard and his fellow coders experience, their tech empire is always ready to come crashing down, without warning.

One familiar face who likely won't be a part of the group's eleventh-hour panic, however, is T.J. Miller's Erlich Bachmann. The comedian left the HBO sitcom after Season 4, with conflicting reports stating that Miller's role was diminished due to scheduling issues and the actor himself stating that he chose to leave. "It felt like a breakup with HBO," Miller told The Hollywood Reporter in a June 2017 interview. "The final phone call was them going like, ‘Well, I don’t think this is the end of Erlich. I still want to see him on television,’ and I was like, ‘I know but I think this is for the best.’"

Erlich's departure from the show was left open-ended, with the software designer and financier being abandoned in China by Gavin (Matt Ross). Though the character was presumed dead, fans hoped that Miller might make a return for the final season of Silicon Valley, until HBO President of Programming Casey Bloys told Deadline that they "highly doubt[ed]" that Miller would cameo in the finale.

It's been a rocky road for both the coders at Pied Piper and Silicon Valley over the years, but it's clear that both of their journey's are about to come to an end in the most appropriately awkward, hilarious way. After all, things get turned upside down every single day in the tech world — it's no surprise that even up until the end, Richard and his friends are still trying to find themselves a stable place to land.

More like this
Netflix Shut Down 'Bridgerton' S3 Rumours About A “Very Dark” Storyline
By Bustle
'The Queen’s Gambit' Season 2 Tweet Wasn’t From Anya Taylor-Joy
By Mary Kate McGrath, Jack Irvin and Grace Wehniainen
'Happy Valley' Recreated This Moment From S1 In Its Penultimate Episode
By Sophie McEvoy
9 Time Catherine Cawood Was An Absolute Badass In Happy Valley
By Sophie McEvoy
Get Even More From Bustle — Sign Up For The Newsletter
From hair trends to relationship advice, our daily newsletter has everything you need to sound like a person who’s on TikTok, even if you aren’t.