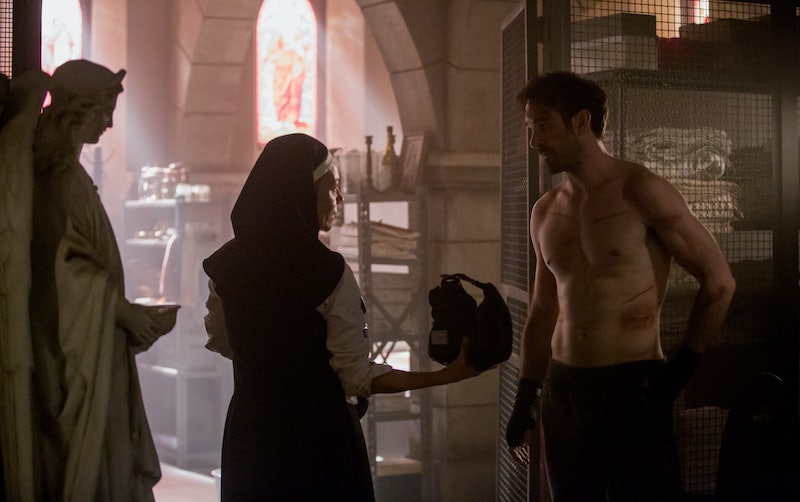 Daredevil isn't dead, though the other Defenders presumed him to be so after a building fell on him at the end of their team-up. An after credits scene revealed that Matt is convalescing in a church, thanks to the help of a particular nun whose name Marvel fans may recognize, especially when she finally appears in Daredevil Season 3. But for non-MCU fans, it might be worth knowing Sister Maggie's story in the Daredevil comics, because it's pretty complex. Spoilers for Daredevil Season 3 ahead. Played by Joanne Whalley, the mysterious character has an important comic book backstory.

In the comics, Margaret first appears in Frank Miller's well-known Daredevil arc "Born Again," which Season 3 of the Netflix series resembles in a few ways — primarily because, at the beginning, Matt is presumed dead and is "born again" at Sister Maggie's church. They meet in the comics under similar circumstances. Matt ends up at Maggie's church after a showdown.

However, there's one key thing about Maggie in the comics that the Netflix may be keeping under wraps. Her full name is Margaret Murdock — she's Matt's mother. Is it ironic that the Devil of Hell's Kitchen is a nun, or fitting? Given Matt Murdock's devotion to the Catholic Church, I'd say the latter. Maggie suffered from various mental illnesses in the comics, and ended up abandoning her family for their own safety. Instead of getting the help she needed at a hospital, she sought refuge in a church. When they met, years later, she couldn't admit to her adult son who she was — but Matt's super senses caught her elevated heartbeat in the lie. He later sends a girl to be cared for by her and the church. Eventually, at the end of Kevin Smith's "Guardian Devil" comic arc, Matt and Maggie become closer.

"She’s a really interesting character," Whalley told reporters on a Daredevil Season 3 set visit, according to Collider. "She’s got a lot of strings to her bow. A few unexpected dark corners that we get to shine a light in. Her relationship with Matt is… eventful." According to the on set interview, Maggie's church is also the orphanage where Matt grew up after his father died. She's in charge of that aspect of the parish, actually. Did Matt's own mother raise him without him knowing it?

Family tends to creep into the Netflix Marvel universe in haunting, if not sinister ways. Jessica Jones' mother, who the super strong detective thought died in a car crash, turned up in Jessica Jones Season 2 as the Big Bad. Luke Cage's secret brother is a villain at the end of his solo series' first season. We may never learn the secrets behind Danny Rand's parents now that Iron Fist has been canceled by Netflix, but there was definitely more to their plane crash than they knew — though Colleen Wing learned that she was related to a freakin' Pirate Queen!

Matt Murdock's father featured heavily in flashbacks during Daredevil Season 1. Could Season 3 be introducing us to his mother? If Sister Maggie is anything like her comic book counterpart, it very well may be.