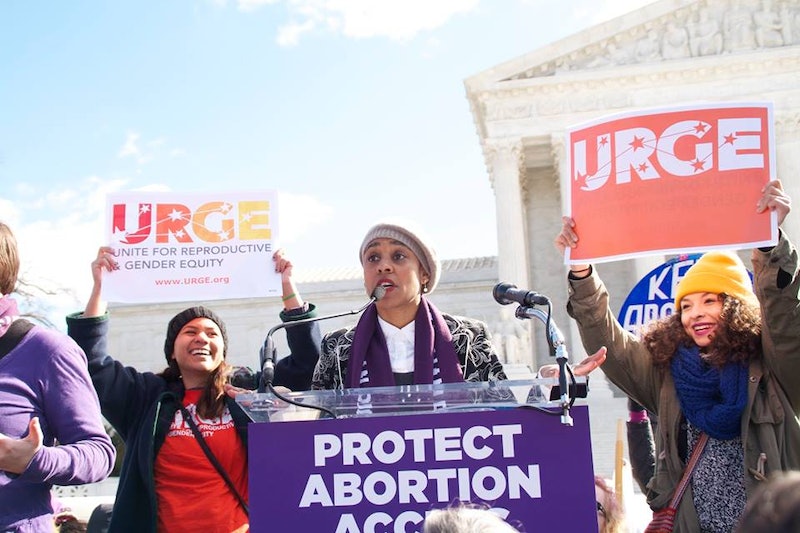 Abortion has long been a controversial topic, so it might be no surprise women are still fighting for bodily autonomy and reproductive rights 44 years after the Supreme Court recognized a woman's right to abortion. But while Roe v. Wade has faced a slew of challenges since 1973, this year feels like a significantly bleak time for reproductive rights. As fraught as the fight seems now, it's more important than ever to show up and take action, according to Kierra Johnson, executive director of Unite for Reproductive and Gender Equity (URGE). For those just beginning to dip their toes into political activism, it can be difficult to know where to start. But Johnson has great advice for how to be an effective reproductive justice warrior.

Let's get real. It can be difficult to feel hopeful about the future of reproductive rights when you're staring down an an onslaught of anti-abortion legislation cropping up at both the state and national level. Toss in the election of a man who not only vowed to appoint a Supreme Court justice committed to overturning Roe v. Wade but who also once said women who get abortions should be punished, and well, it can be easy to feel downright defeated. However, as the old adage says, when the going gets tough, the tough get going. And there's no better time than now.

Leading the push for reproductive justice are women like Johnson, who's been working with URGE, a youth-driven organization centered on gender, reproductive rights, and sexual health issues, since 1999. "This administration has already brought a number of daunting challenges to our doorstep," Johnson tells Bustle. "But women, people of color, young people, immigrants, we know what it's like to fight impossible odds. We have to continue to be vigilant and resist and protest and dissent and expose the lies and hypocrisy and continue to take action because we really do have power both to change hearts and minds and to change policies."

Political activism can take on various different forms and there's no one way to advocate for improved access to abortion. However you choose to get involved, it's important to remember that complacency isn't an option, even after a roaring success like the Women's March on Washington. "Regardless of what we did yesterday, tomorrow requires more of us," Johnson says. "We have to be vigilant. We can't afford to be silent. We can't afford to be neutral. We can't afford to assume that someone else is going to take action on our behalf. Our whole lives are being attacked right now."

In the spirit of building on the momentum of the Women's March on Washington, here's Johnson's advice for what those seeking to protect and strengthen reproductive rights can do going forward.

Combat The Stigma Of Abortion

While the controversy that surrounds abortion has kept the issue a hotly debated political topic, it has also, unfortunately, contributed to it being seen as socially unacceptable. To combat the stigma and shame built up around abortion — an important action step in advocating for increased access — Johnson emphasizes the importance of creating spaces where women can talk openly about their experience and what motivated their decision to get an abortion.

"I think having a space where people can talk about their feelings [and] the context of the reason why they chose abortion as an option is really important," Johnson tells Bustle. "One, because it normalizes abortion so we can't pretend that only a nasty few women have them. [And] also because those stories illustrate the complexity of women and our lives and our stories. Abortion shouldn't be set apart as somehow different from the other health care that we require."

You can boost the volume of women's voices by supporting campaigns like Shout Your Abortion, which launched as a social media hashtag campaign in 2015 in an effort to build a supportive community and change the cultural dialogue around abortion.

But swapping stories isn't enough. Although recent polls show the majority of Americans support legal abortions, recent years have seen conservative legislators make an aggressive push to restrict abortion access across the country. At least seven states now have only one abortion clinic and among the restrictive abortion legislation being introduced is a national heartbeat bill that would ban abortion as early as six weeks from conception.

Even more maddening, according to Johnson, is that fact that many lawmakers who oppose abortion don't support legislation like a living wage that serve to benefit women and children. "We have to point out that the same politicians that are trying to outlaw abortion access are also against a living wage, they're also fighting parental leave, they're fighting access to broad healthcare under Medicaid for children and women," Johnson tells Bustle. "You can't claim to be in support of women and children and at the same time say nope you don't get to have abortions and nope actually you don't get to have prenatal care and no you actually don't get to have maternity leave."

Since his election victory, Trump's dished out a lot of hate toward the protesters who've converged in cities across the country to express their opposition to his presidency, his Cabinet picks, and his policies. But with the president himself seeming to turn a deaf ear on demonstrators' concerns and deriding them as "paid protesters" in Twitter rants, it can be easy to forget that the right to peaceably assemble in protest is a critical component of democracy.

"We have to resist, we have to protest, and we have to dissent," Johnson tells Bustle. "We have to remind ourselves that those things are very American. Sometimes it's hard because the rhetoric is if you're not with the president in lock step or you're dissenting out loud, you're being unpatriotic. [But] the opposite is the case. Resisting and protesting and public dissent is a very widely held American value."

One of the largest demonstrations planned around Trump's inauguration was the Women's March on Washington, during which more than a million women gathered in peaceful protest in cities across the country on Trump's first day in office.

"Being at that march was so invigorating. It was such an illustration of the power of people," Johnson, who spoke briefly at the main march in Washington, D.C., says. "Gender was the catalyst for bringing all of us together but anyone paying attention [could] quickly see that that march was a beautiful intersection of race and class and gender and what it means to work at that intersection in a way that raises all of us up to be our best possible selves."

Get Involved In An Active Way

On top of continuing to resist through peaceful protest and being aware of the many ways restrictive abortion legislation impact youth, women, people of color, and families, effective reproductive justice advocates need to "create and exercise real action," Johnson says. Begin by getting involved with organizations or campaigns that share your values and principals. Volunteer your time and, if possible, your money to campaigns and organizations intent on protecting abortion access.

Then reach out to your government representatives about protecting reproductive rights and abortion access as often as you can. "If there's a Twitter storm at a member of Congress, get on board," Johnson says. "If you see shared on Facebook three times that your member of Congress wants to hear from you, why are you ignoring that? Take the number down and call because our opposition is calling."

According to Johnson, such advocacy actions not only serve to influence elected officials but also empower and inspire others, too, creating a groundswell of people taking action.

The truth of the matter is, whether it's a bill to codify the Hyde Amendment or a state law banning second trimester dilation and evacuation abortion procedures, restrictive abortion legislation disproportionately affects youth and women of color. This makes it vital to keep them at the center of the fight for abortion access by centering our campaigns around them and their experiences.

"That means making sure we're engaging with them as we're coming up with our ideas and our strategies and creating our messages," Johnson says. "I believe that if we center the most affected we will create winning strategies that will impact all of us."

Apart from centering reproductive justice campaigns on those most affected, Johnson says it's also important to acknowledge the work those communities have done. "We have to acknowledge and remember that women of color have been doing the work of sexual health, reproductive rights, and gender equity from the beginning of time," Johnson says. "[They] have played major roles in policy change and culture change around these issues. If we continue to invest in [youth and women of color] I think we can go from having a mandate to having power."

As uphill as the fight to protect reproductive rights may appear, Johnson says its important to find reasons to laugh while carrying out advocacy actions. "We also still need to find ways and reasons to laugh," Johnson tells Bustle. "It's hard but I think we need that to be sustainable. It's a way for us to exhale together."

Whether you find something to joke about in the political sphere (like this photo of Swedish lawmakers trolling Trump's all-male cheering section as he reinstated the Mexico City Policy) or on the latest episode of Saturday Night Live, use laughter to occasionally escape the solemnity of the situation before us for a likely much-needed moment of recharging.

Although Trump's presidency seems to have emboldened conservative lawmakers intent on rolling back reproductive rights, the battle rages on. At the frontlines are advocates like Johnson and organizations like URGE, who will keep up the fight for reproductive justice and abortion access.