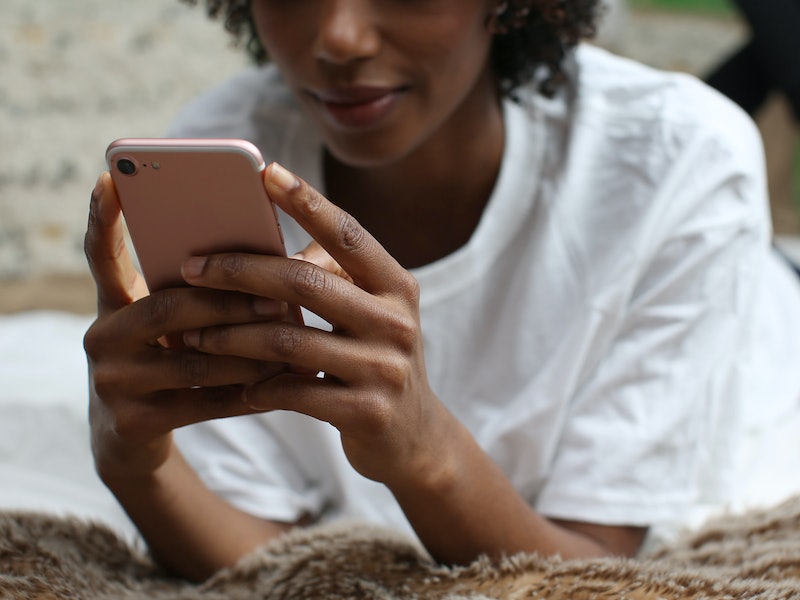 I've always been a fan of sexting. I'm a very verbal person, so talking about doing something in bed can be even more fun for me than actually doing it. But sometimes, I run out of sexts to send. My standard "I want you" and "I've been thinking about..." are great conversation-starters, but, you need to learn more conversation-starters if you want a greater variety of conversations.

So, when I learned about Slutbot, a new tool to help you learn how to sext, I decided I'd give it a spin. Slutbot is a feature of Juicebox, an app that connects people to sex and relationship coaches. The way it works is: You text a number Juicebox gives you, Slutbot asks for your preferences, and you start sexting.

“Sex is so much more than a physical act. People want their minds stimulated as well as their bodies, and dirty talk is one great way to do that,” Juicebox CEO and founder Brianna Rader said in a press release emailed to Bustle. “We have also found that learning how to dirty talk is one of our most common user requests on the Juicebox app. We believe the best way to learn is by doing, which is what inspired us to create an interactive experience that mirrors real life to help people talk about sex. We’ve also gotten feedback from testers that Slutbot has turned them on, so that’s always an added plus! It’s almost like interactive erotica.”

When I first texted Slutbot, the first things it asked me were how old I am, my gender, and whether I'd prefer talking to a Slutbot with a vulva or penis. I liked that this was phrased in gender-neutral terms, though I later found out this was only because I told Slutbot I was non-binary — otherwise, you get asked if you want a "male bot" (assumed to have a penis) or a "female bot" (assumed to have a vulva).

When I did it again and said I was female and wanted a male bot, the bot assumed I had a vulva and it had a penis, which I found a bit problematic. It's good not to conflate gender and genitals regardless of the gender of the person you're talking to! If Slutbot needs to know what body parts someone has, it should just ask that. But I digress.

Next, the bot gave me some sexting suggestions, including "Explain what you’re about to do: 'I can't wait to...'," "Describe what you are doing/what it feels like: 'It feels so good...'," and "Describe what you just did: 'Did you like the way I...'" But I didn't have to use them yet, because Slutbot then asked me if I'd like to sext and started it off themselves. They added, "If you get uncomfortable you can always say the Safe Word PINEAPPLE to stop the chat," then gave me a choice between "Slow & Gentle" and "Hot & Sexy." I chose the latter.

"I've been thinking about you today. Last night was really hot. Want to know my favorite part?" they started off. It was pretty easy from there — I just let them describe what we supposedly did the previous night. Some of it turned me on, and honestly, some of it turned me off.

The conversation got a little awkward at times — or would have, had I been talking to a human. But Slutbot took feedback well. When they asked if a certain thing sounded good to me, I flat-out told them "no," to which they just said, "Good to know! What do you prefer?" If anyone wants to practice their consent skills, this bot sets a good example. The rest of the conversation focused on what new things they wanted to try in bed with me.

While this conversation was amusing, the whole point was to use it as inspiration to sext with my partner. So, after sending me a "sexy pic" (which was really just a cartoon of a robot), Slutbot sent me on my way.

The next time my partner and I were away, I texted him, "I can't wait..." and described what I was imagining doing with him. He replied, "Aww me neither! I'll dream of it. Will go to bed now." Hmm... so maybe sexting with a human was harder than sexting with a bot.

But I didn't give up. I tried again another day, taking a line from Slutbot and telling him what I wanted to do next time I saw him. This time, he was up for it. He asked for some photos then told me what he wanted to do to me. The conversation led us to reminisce about a sexy day we had together a long time ago and talk about what we'd need for that to happen again — and it ended with us having cyber sex, something we rarely do!

Who would've known it was so easy to make your sex life more exciting and connected? Slutbot may be a little awkward, but they are a good teacher — and their lessons are sexier than any class offered in school.