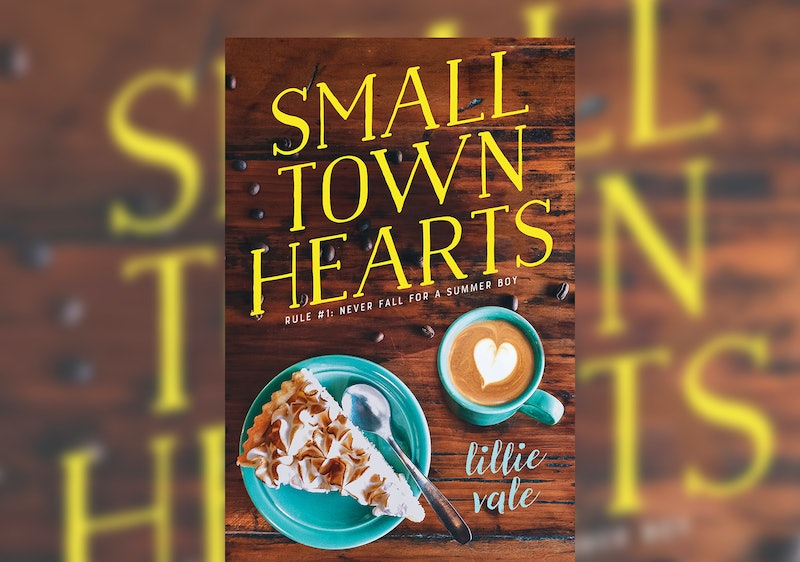 If you're looking for the perfect romance novel to start your reading year off right, I've got a sneak peek at a fantastic debut you're going to love. Lillie Vale's Small Town Hearts is the queer-inclusive YA novel you've been waiting to read. It hits stores on March 19, but you can read an exclusive excerpt from it below!

Small Town Hearts centers on Babe Vogel, a recent high-school graduate working as a barista in a Maine resort down. She's dealing with the fact that this is the last summer she and her two BFFs will be guaranteed to spend together, since they're going away to college and she's staying in Oar's Rest, but a cute artist named Levi might provide her with exactly the kind of distraction she needs. Hopelessly complicating matters, though, is the re-entrance of Babe's ex-girlfriend, Elodie — whom she's totally over, of course.

In a Jan. 19 tweet, Vale described Small Town Hearts as a book full of "sandcastles, pageants, oh my!," set in "sleepy Maine villages," and following a "bi babe living in a lighthouse."

Check out an excerpt from Lillie Vale's Small Town Hearts below:

“Don’t think I didn’t notice you lingering over there with the summer boy, Babe Vogel,” Lucy said. Her voice was low, but her smirk was at full volume.

“That? That was just good customer service.” Cheeks still hot, I moved to the stainless-steel carafe, and in wordless unison, Lucy slid a white ceramic mug across the counter for me to fill.

“Uh-huh,” she teased, fluttering her eyelashes at me. “Better get this over there. Along with some of that exemplary customer service.”

I huffed, resisting the impulse to roll my eyes. “You know I’ve never gotten involved with a summer boy,” I said, shimmying out of the way of the grimy dishcloth she swatted at me.

Despite what Lucy thought, I wasn’t crushing on tall, blond, and gorgeous sitting in the corner table. Sure, he was aesthetic. And mysterious. And new to Oar’s Rest, the sleepy little Maine seaside village that spilled over with tourists during the summer and turned into a ghost town the rest of the year.

Nestled on the coast, Oar’s Rest attracted all kinds of people, but mostly the artistic kind. The kind of girls who tucked flowers into their hair and rode shiny new bicycles. The kind of boys who had paint and cigarette stains on their fingertips, battling for flesh. Writers who secreted themselves away from the real world and then slipped away from their rented houses and emerged in the fall with a bestseller.

Despite what Lucy thought, I wasn’t crushing on tall, blond, and gorgeous sitting in the corner table. Sure, he was aesthetic. And mysterious.

Mystery Boy thanked me when I delivered his coffee, returning his attention to the sketchbook.

Lucy was waiting for me when I returned to the counter. “Don’t even say it,” I warned. “I wasn’t going to say anything!” She threw up her hands. She let a beat pass. “Did you see his face? Go say something!”

I pursed my lips, eyeing him from across the room. “What? That’s so weird. I’m not going to do that. He could have a girlfriend. And anyway, I hate when guys walk in and start to creep on me. It goes both ways. I’m not going to hit on him out of the blue.”

“It’s not that weird. Someone has to make the first move.”

“Lucy,” I said, lifting an eyebrow, “the cardinal rule of every beach town is that locals do not get involved with tourists. They always leave.”

“I can’t even remember the last time you went on a date,” said Lucy. “And those girls and guys were cute.”

I picked up a mug that didn’t even need cleaning and began to rewash it just to have something to do. When I was nervous, I had the telltale habit of wringing the bottom of my shirt, and the last thing I wanted was for Lucy to know she’d hit a nerve.

She was right. I hadn’t been serious about anyone in a few years because I’d been dating Elodie Hawkins on the sly. El had graduated a year ahead of me and gone off to art school in California. Going out of state wasn’t enough — she seemed to want to get as far from Maine as she could without crossing an ocean.

A memory blurred into my mind’s autofocus, sharpening until I could count the freckles spattered across El’s nose and cheeks, her hair thrashing in the wind, the wisps of the cotton candy body spray she loved. If I closed my eyes, I could almost smell it. I could almost see the gray of the sky, the birds circling overhead. The sorrow in her eyes as she said she wasn’t ready to tell people about us — about her.

I turned, facing Mystery Boy. “Hey, what else can I get for you?” I flicked my eyes toward the German chocolate cake.

A memory blurred into my mind’s autofocus, sharpening until I could count the freckles spattered across El’s nose and cheeks...

His eyes followed mine and his grin widened. “Just wanted to settle my bill.” He flopped down a five-dollar bill on the counter.

Counting out his change, I placed it into his open palm, intensely aware of my fingertips grazing his warm hand.

“Thanks.” He turned to leave, then paused, seeming to wrestle with a decision. “I’ll take you up on that cake some other time.” With a final nod to me and Lucy, he headed for the door.

When he left, I let out a breath I hadn’t realized I was holding. “Did that sound like he was planning on coming back, or like that’s the last time we’ll ever see him?” I wondered aloud. Though I’d been working at the Busy Bean for almost three years, this was the first time I’d hoped a tourist would be a repeat customer.

My curiosity wasn’t lost on Lucy. “So you are interested in a summer boy.” Lucy’s voice held a grin. “And he’s cute. Hint, hint.”

“Maybe he’s here for classes at the art center.” I stared through the window at his retreating back, wondering where he was heading. “He had a sketchbook with him.”

She shrugged. “Wouldn’t surprise me. I think they’re starting their summer program this week.” She paused. “I heard Elodie Hawkins is coming back to be a mentor. Weren’t you two friends?”

What? The wind was taken right out of my sails. El was coming back? She hadn’t said anything. She could have texted, she could have emailed...

Elodie had left town, left me. I shouldn’t care if she was coming back. I’d gotten over her. But there were some things I couldn’t tuck away as easily. She was like a second beating heart inside me — tingling, magnifying, terrifying. This heart was carnivorous. It hoped and hurt at the same time. Hearing her name again filled me with a savage rush of life, something I couldn’t hold back any more than I could keep the memory of us at bay.

She was like a second beating heart inside me — tingling, magnifying, terrifying. This heart was carnivorous. It hoped and hurt at the same time.

Being the one left behind never got easier. After Mom, maybe I should have wised up. Nothing stayed the same forever, but when I remembered the soft, dazed look El wore right after I kissed her, I had thought that this could. We could. In possibly the biggest plot twist of my life, though, I’d discovered we couldn’t. And just like that, everything I’d cherished for so long became a bitter enemy. Elodie left town, but the ghost of her was still here, haunting.