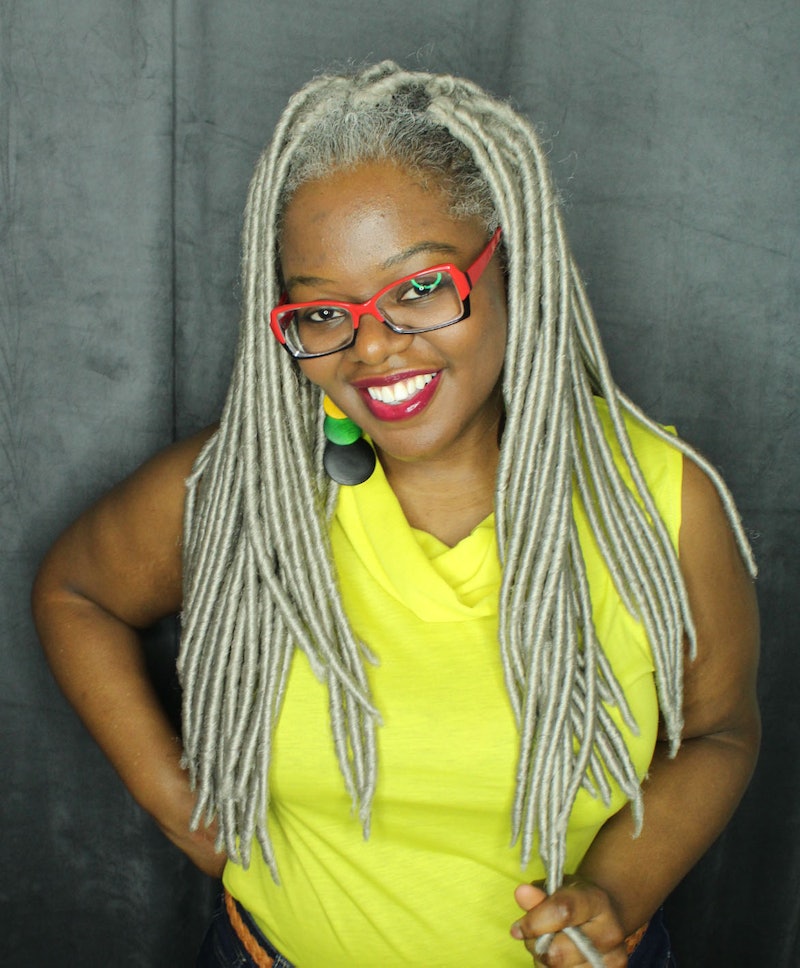 The third installment of inclusive brand SmartGlamour's dynamite #AllMeansAll campaign has arrived, and it's all about spotlighting the beauty of models of color. "I decided to frame this shoot as more of a portrait shoot to truly highlight the people wearing my clothing," SmartGlamour founder and designer Mallorie Dunn tells Bustle. "SmartGlamour is people-forward, before it is fashion-forward."

Previous installments of #AllMeansAll have celebrated trans and femme models and women size 24 and up. Dunn, who ethically handmakes every single SmartGlamour piece, tells Bustle she knew she needed to bring models of color to the forefront this time around.

"In the past, I've received emails from shoppers happy to see smiling black women on SmartGlamour's home screen and prominently displayed throughout the Shop pages," she says. "Representation matters. Whether that is seeing a body type similar to yours, so you can imagine the garment on yourself, or just seeing someone with a similar skin tone."

Dunn says she hired 14 models for this #AllMeansAll installment, with "varying skin tones, of all sizes, shapes, ages, abilities...so I made 14 different top styles of ours. Models' sizes in this campaign are ranging from small to 5X," Dunn adds.

SmartGlamour clothing is always available from size XS to size 6X "and beyond," with Dunn offering customizations so people of any size will be able to wear her clothes.

Dunn is also a big believer in bold looks. "I chose to use bright but rich solid colors that I knew would look stunning on any and all skin tones," she says. "I think the result is striking imagery that feels celebratory in nature."

Though Dunn has always made hiring diverse models a part of SmartGlamour, previously "we never felt the need to highlight their identity to anyone," she told Bustle about the first #AllMeansAll installment. "We never want our models to feel as if they are being exploited for their differences."

Dunn explains she kick-started #AllMeansAll because in the current political climate, she thinks it's imperative the fashion industry truly embraces the diversity of people in the world.

"I find that in mainstream fashion, but especially online shopping fashion, the imagery shown is overwhelming white and light-skinned," she says. "SmartGlamour has always had diversity with the ethnicity of our models, but as with all of the #AllMeansAll campaigns throughout this year, I feel that it is important to highlight these groups that very often get forgotten, even when brands use the words 'all' and 'everyone.'"

For #AllMeansAll, Dunn reaches out to folks from marginalized groups, and says the results of her sourcing often mean many of the models in the campaign's shoots have no previous experience modeling.

"SmartGlamour does not only employ people to model who have professional or amateur experience," she says. "It is often a life-changing time in their life. I did have multiple [models of color], throughout the day, bring up the positive atmosphere of SmartGlamour shoots, how the clothing makes them feel, and how important it is not just for the shoppers/readers who follow SmartGlamour but also for them."

SmartGlamour's #AllMeansAll campaign will continue through 2017, with future campaigns involving disabled folks and people over the age of 45. "I'll also be restarting our panel discussion videos where these same marginalized groups talk about their experiences and how their identities intersect with their body image," Dunn says.

Dunn has also opened a showroom in Greenpoint, Brooklyn, which she says is the first of its kind to cater to all sizes and shapes of people. On April 25, she'll be livestreaming from inside the showroom, where she'll solve six different fit problems with SmartGlamour customizations. And to top it all off, she plans to do pop-up shops in New York City over the summer.

This brand is always up to something excellent, and with everything fans have to look forward to in the coming months, this SmartGlamour summer is shaping up to be extra sweet.