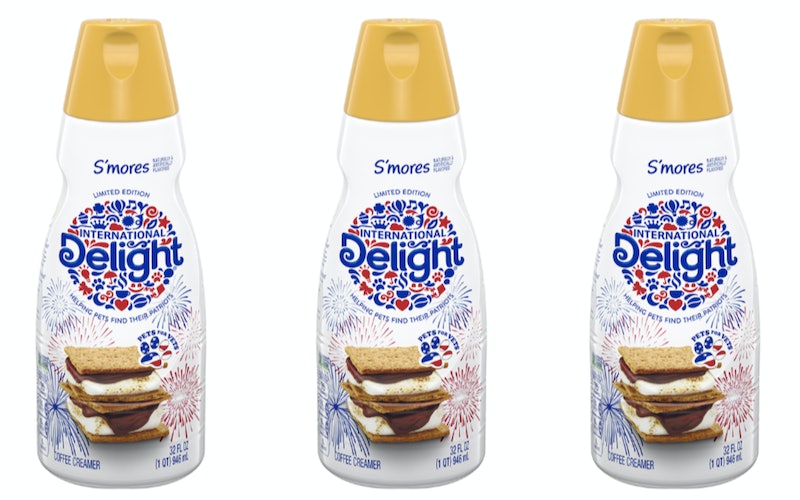 In the grand scheme of summer sweets, one rises to the top. S’mores are a staple of warm weather, and difficult to replicate outside of a camp site. Sure, you can make oven s’mores by toasting a marshmallow under a broiler, then adding it to your grahams and chocolate. But nothing's quite as delicious as the real thing. We are at the start of camping season right now, but a new product wants to make it easier for you to get that sweet, sweet taste of smoky summery sweet without venturing too fast — enter International Delight's Limited Edition S'mores Coffee Creamer, which is here just in time for indoor s'more summer dreams.

Instagrammers JunkFoodAdventures recently spotted a bottle of the stuff in a dairy case. A photo of the patriotic-colored bottle (complete with firework graphics) is accompanied by an emoji-filled caption that reads "Lookie what I found! One single bottle hidden in the back! International delights limited edition S’mores coffee creamer! Found at Walmart!" International Delight's website also features a page devoted to the offering, which says, "Catch summer in a bottle!" It should be available now in major grocery retailers nationwide, but if you're really about that s'mores life, you can check the store locator on the website.

On the topic of s'mores-inspired snacks you can eat without a campfire, another must-have is S'mores Oreos. S'mores Oreos (which, really, should be called S'moreos) are a slight variation on the original black-and-white cookie sandwich that is now a kitchen staple. They feature graham cracker-flavored cookies with layers of both Marshmallow and Chocolate flavor cremes. It should be noted that for a while, S'mores Oreos have been off shelves — something that made fans antsy with anticipation.

In mid-January, Instagrammers from TheJunkFoodAisle posted a photo of a seemingly updated package of the cookies, with an accompanying caption that reads, "S’mores Oreo is coming back in 2019! Last spotted in 2016, S’mores Oreo features a Graham flavored cookie and layered Marshmallow and Chocolate flavor cremes. While the cookie seems to be the same (though I will say they taste better than I remember) the packaging is getting a cool new redesign." And per Nabisco, the fan favorite is back, and should have started hitting shelves in April 2019.

Olive Garden, the nation's most-loved casual Italian eatery, also got in on the s'mores game. Part of last year's summer menu was the unparalleled S'mores Layer Cake. An original idea and design, the S'mores Layer Cake combined the basic elements of a Tiramisu with the flavor profile of a campfire snack. Ladyfingers served as the base of the s'mores cake, and were soaked in vanilla (rather than espresso, like in tiramisu). They are then layered with chocolate mousse and marshmallows, and topped with crumbled graham crackers, toasted marshmallows, and a chocolate crunch.

While the S'mores Cake is not on the menu currently, here's hoping it will return once again when summer rolls around. Until then, you'll have to settle for some s'mores-flavored coffee — find International Delight S'mores coffee creamer in the dairy aisle, and possibly in your dreams.