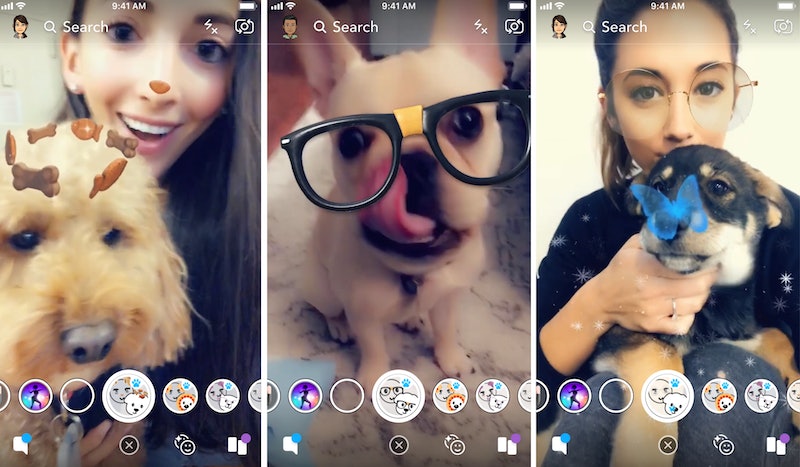 If you have a couple days off of work this holiday season and are planning on spending them taking selfies with your dog, now there's a new way to jazz those pics up. As of Monday, December 24, Snapchat has dog lenses, so that dogs can wear "pizza faces" and reindeer antlers with a precision that was previously reserved for humans and cats. Yep, cats already got their time in the Snapchat lens spotlight, now dogs are having their day.

Trying out one of the new lenses on your dog (or your friend's dog or neighbor's dog, whoever) is easy. You just open Snapchat, click on "lenses", select the one you want, and snap away. Well, that part is easy. Getting you dog to sit still and look at the camera is probably at least a little more challenging.

Snapchat released a number of example photos to show what the filters look like, and the dogs in the pictures are some pretty special pups. The dogs are (or, at least, were) all available for adoption at Los Angeles adoption center Wags and Walks. You can check out Wag and Walks' currently available dogs here. For instance, there's Cricket, the 4-year-old Chihuahua mix, who only weighs six pounds; Oboe, the 6-year-old puggle with a really ridiculous underbite; and Rupert, the 7-year-old Dachshund mix, who "looks deeply into your soul, enjoys his daily walks, and is wonderful on a leash."

Dog lenses might have taken until now, but cats got to experience Snapchat filters two months earlier when the company debuted them back in October. Before that, Snapchat filters recognized human faces, but not animals'. It was possible to get the filters to show up on animals, but was more difficult than using one on a person's face since they weren't meant to work on a pet. Now, Snapchat can recognize dogs and cats, meaning they, too, can wear digital crowns in an instant.

And while humans get flower crowns on Snapchat, dogs get something more specific to them. The new dog lenses include: black glasses, giant wireframe glasses, antlers, floating hearts, a butterfly on their nose, a pizza around their face (with pizza dog ears for any human in the photo), and a crown made of dog treats.

The dogs lenses aren't the only special new filters Snapchat has added recently. A few days earlier, Snapchat released its Big Ben lens, which allows visitors to the London landmark to take pictures that appear to include Big Ben while Elizabeth Tower is under construction. The tower is currently covered in scaffolding and you can hardly see it, so the filter lets people take pictures that sorta, kinda, look like Big Ben is restored to its former glory and with the correct time on the clock. It also makes it look like the tower is in a snowglobe with the words "Happy Holidays!" on it, but guess that makes it so history can't really be rewritten.

Pretending to be at fully functional landmarks in London or taking photo after photo of your dog at home, Snapchat wants to help make your holiday a little more festive. (P.S. Choose the dog treat crown. It's the cutest one.)