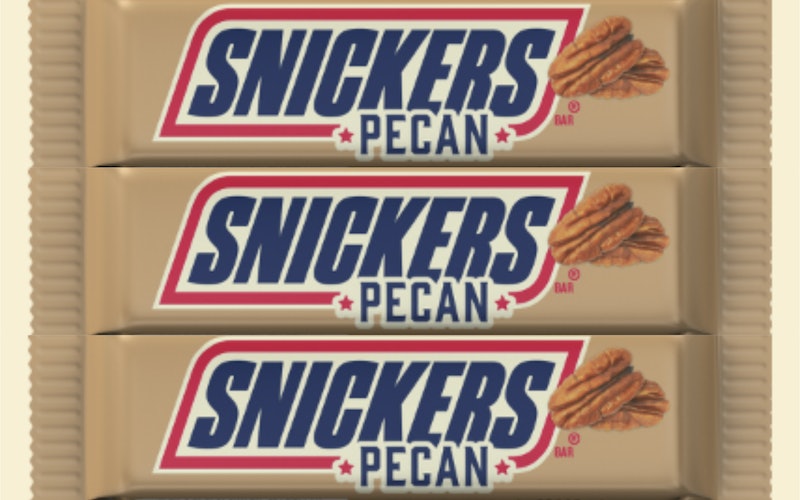 Snickers fans, here's some news that's either going to light up your life or spiral you into an existential chocolate crisis — Snickers Pecan bars just hit the scene, giving a monumental shakeup to the candy bar staple. Per Snickers, the new version "features the same caramel and milk chocolate of the classic Snickers Bar, now with delicious pecans inside." Basically, peanuts are so 2018, and pecans are finally getting their time to shine.

If you're hoping to get your hands on these new bars, you may have to act fast. At the moment, they're not available on shelves — instead, they're being sold in packs of 15 that retail for $30 each on SnickersPecan.com. The bars will begin shipping on Monday, Sept. 30, so you can expect to have them hit your doorstep sometime in October — hopefully when it's not so hot that they'll melt in the mail, and just fall enough into the fall season that they'll be there just in time for the major "chocolate pecan pie" vibes they seem to be giving off. Can we go ahead and skip all the Thanksgiving baking hassle and swap out dessert for these instead?

Here's what they'll look like when they arrive at your door.

Per Snickers, the swap out for pecans wasn't a decision the company made lightly. In fact, it had a lot to do with the bar's roots. "Many of our famous Snickers bars are produced in Texas, which also happens to be where some of the best pecans come from," the website explains. Introducing our all new – Texas Proud – Snickers Pecan bars. Inspired by our Snickers fans and the passionate associates in Waco, TX."

The company warns, though, that these boxes are limited edition, and that they'll only be available while supplies last — so if you have a hankering for a Snickers with pecans in it, you'd better move fast.

This isn't the first nut shakeup that Snickers has debuted in recent years. The company also launched a Snickers & Hazelnut bar, which is still available in stores and online. Unlike the Snickers Pecan bar, though, the Snickers & Hazelnuts just added an ingredient, rather than swapped out — it includes "hazelnuts, peanuts, nougat, caramel and milk chocolate," meaning the peanuts got to stick around in this version.

The brand also released Creamy Snickers bars in 2018, which come in Peanut Butter, Almond, and Maple Almond. While they retained the general Snickers flavor, there aren't any crunchy peanuts in it to be found. (For what it is worth, I remain deeply obsessed with the Maple Almond version, and would tell you to try it if I weren't worried about there being enough in the world for myself.)

Essentially, there are plenty of options at your disposal if you're looking to experiment in Snickers land — but if you're hoping to get your hands on this version specifically, you'd better grab yourself a box of them while they're still around. Happy snacking, y'all!