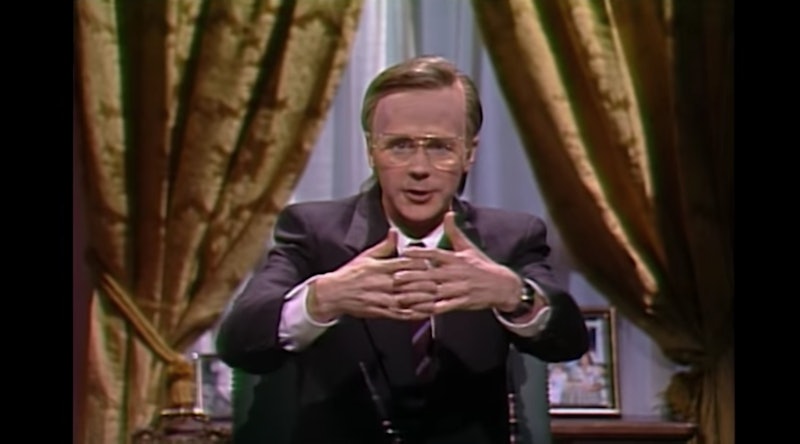 Bush dedicated most of his life to public service. He was a World War II combat pilot, a Republican congressman, chair of the Republican National Committee, a two-term vice president, and president from 1989 to 1993, according to CNN. He also famously passed the Americans with Disabilities Act, which "prohibits discrimination against those with disabilities and helps ensure opportunities for employment," according to PennLive.

Many have noted that Bush wasn't perfect, of course. He notably banned HIV-positive immigrants from entering the United States, and reduced funding for HIV and AIDS research, according to Out. During his presidency, he said AIDS is one of the "few diseases where behavior matters," and that if people wanted to prevent the spread of HIV and AIDS they needed to "change the behavior," according to The Nation.

But Saturday Night Live noted that, through all the criticism and his mistakes, Bush was never afraid to laugh at himself. Toward the end of Saturday's "Weekend Update," hosts Colin Jost and Michael Che took a serious tone and offered their condolences to Bush's family. Jost said, “President Bush was famously a very warm and gracious man who always understood the power in being able to laugh at yourself," according to video of the segment.

They then aired clips of former SNL cast member Dana Carvey doing impressions of Bush throughout his presidency, and a short clip of Bush responding to Carvey's impressions of him. “I’m watching you do your impression of me, and I’ve gotta say it’s nothing like me,” Bush said in a lighthearted tone during the clip. “It’s bad, it’s bad."

Not only did Bush appear on SNL with Carvey, he also invited Carvey to the White House during his presidency, and the two became friends, according to Deadline. Carvey appeared on Conan in April 2018 and said he and Bush had remained friends "for the last 25 years," according to video of the segment.

"They welcomed my wife and I to the White House after he had lost the election, and we really hung out with them, we really got to know them," Carvey said of Barbara and George H.W. Bush, according to the segment. "I've never really seen a marriage that was that effortless. They were so much fun together."

Carvey said Bush would call him regularly and write him notes, and he described Barbara as "incredibly witty." He said that he once walked into the couple's bedroom in 1992, and then-presidential candidates Ross Perot and Bill Clinton were on two separate TVs, and Barbara said, "I don't know which clown to look at."

Carvey described the political climate in 1992 and his relationship with the Bushes as "a different time," according to The Hill. He said, "It wasn’t scorched-earth, angry politics. ... [They] didn't demonize the other side."

And that's what SNL sought to highlight in its tribute: a president who was willing to laugh at himself — a president from a different time.