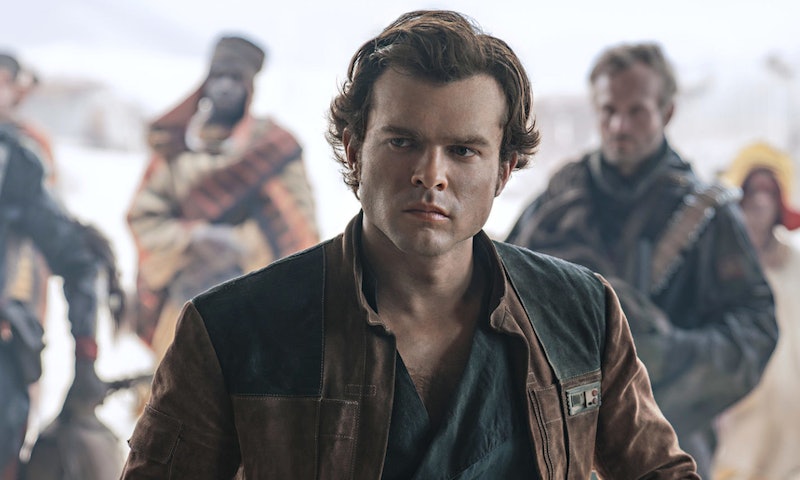 The origin of Han Solo’s name has long been a mystery. There have been plenty of theories, including some pretty wild ones, but Solo: A Star Wars Story finally puts the theories to rest and tells the real story of how Han Solo got his name.

In 2017, Disney CEO Bob Iger let it slip during a lecture at the University of Southern California that the movie would reveal how Han got his name, confirming that Han Solo isn’t actually the character's real name. Of course, Lucasfilm president Kathleen Kennedy tried to diminish speculation about it, saying, “There’s more to Han Solo’s name, but it’s not that it’s not his name. It’s obviously his name. It will always be his name.” But it didn’t work, because Iger's statement still acted as confirmation to Star Wars fans that the major theory about Solo not being the hero's birth name was actually true.

Small spoilers ahead. One of the most plausible Han Solo fan theories was that the scruffy-looking nerf herder gave himself the cool sounding last name to solidify his former lone wolf status, or that it was actually Ren. Turns out, his name’s origin story isn’t as elaborate as many fans believed it would be. The reveal comes early on in Solo, when Han tries to escape with Qi’ra. A guard finds out that he doesn’t have a last name and points out that Han has no people and is alone, dubbing him “Solo.”

The scene provides an answer to a decades-old mystery. Although Han Solo name theories became very popular when Star Wars: The Force Awakens came out just a few years back, since it would’ve made sense that Kylo Ren adopted his father’s old name, the theories have actually been around for a long time. In fact, the oldest recorded theory is from 1983; in the Return of the Jedi storybook, there’s a passage that shows Luke speculating about the origins of his name. It reads:

“Luke felt a change in Han, and he knew that everything he and the others had risked had been worth it. 'Solo' means 'alone,' he thought. He had often wondered whether that was Han's real name. Maybe it was an alias Han had chosen—one that Han felt described him better than his real name.”

Even though the Star Wars storybooks aren’t technically canon, this theory turned out to be true — except that Han didn’t quite choose his own name. For fans who have been waiting to find out for years the origin of the smuggler’s unique moniker, this reveal might be a disappointment. Yet surprisingly simple answers to some of Star Wars' biggest mysteries have become a pattern in the new movies. Just look at how director Rian Johnson handled the reveal of Rey’s parents in The Last Jedi, if Kylo's words about the parents being "nobodies" is true. Fans were expecting Rey's mom and dad to have been Jedis, or for Luke to be revealed as the hero's true father, but Kylo dismissed these theories in a quick sentence.

Another theory that Johnson put to rest in The Last Jedi was that Leia would end up dying, due to actor Carrie Fisher's death. In The Last Jedi, she’s partially in a coma, but then she wakes up and is stronger than ever. Many fans were not expecting her to remain the last living character from the original trio, so now the next big mystery is how Fisher’s absence will be handled in the upcoming film.

The story behind Han Solo’s name might not have been what fans were expecting, but the simplicity of the reveal is in line with past Star Wars films. As far as getting answers to other Han Solo theories, though, we'll need more than just one standalone movie to get those mysteries solved.

More like this
Twitter Is Unravelling Over Wolverine’s Return For 'Deadpool 3'
By Darshita Goyal
The 50 Most Powerful Characters In The Marvel Universe, Ranked
By Johnny Brayson and Nola Pfau
Lin-Manuel Miranda & Tituss Burgess React To 'Little Mermaid' Casting Backlash
By Radhika Menon
UK Viewers Will Have To Wait For The Terrifying 'Hellraiser' Reboot
By El Hunt
Get Even More From Bustle — Sign Up For The Newsletter