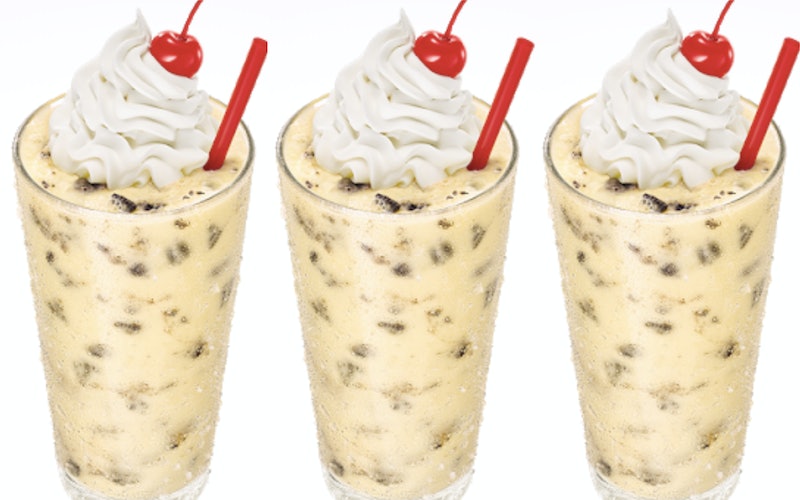 When it comes to summery treats, not everyone is into the same thing. Some people might want to cool down with a popsicle. Some with a cold glass of rosé. Others with frozen yogurt. But, if you're a milkshake person, Sonic has you covered with two new flavors. As reported by Brand Eating, this summer Sonic has Yellow Cake Batter Shakes, including one with added Oreo pieces and one without. So, yeah, the Oreo one is basically a cake batter milkshake and cookies and cream milkshake combined. Sounds intense and very sweet.

The Yellow Cake Batter Classic Shake is made of 100% real ice cream blended with yellow cake batter, and the Oreo Yellow Cake Batter Master Shake is the same recipe with Oreo cookie pieces mixed in. Both milkshakes are topped with whipped topping and a maraschino cherry.

Brand Eating reports the shakes are around for a limited time, although it's not clear exactly how long that will be.

If you'd like to try the Yellow Cake Batter Shakes, Sonic also conveniently has a promotion to convince people to do just that. Sonic Nights is the chain's deal that happens after 8 p.m. (at participating locations) and features half-price milkshakes, as well as Ice Cream Cookie Sandwiches for $1.49. Add-ins still cost extra, but if you're there for the Oreo cake batter milkshake, then your mix-in is already taken care of.

The Ice Cream Cookie Sandwiches are another recent addition to the Sonic menu. In April, the desserts returned to the menu for a limited time in two varieties, Nestlé Tollhouse Chocolate Chip Cookie and Oreo. (In case you're wondering, the Oreos wafers used for the ice cream sandwich are larger than normal Oreos. That said, little regular-sized Oreos filled with ice cream would be cute. Take note, Sonic. Or Oreo. Whoever.) Both types of ice cream sandwich sell for $1.99 when it's not Sonic Night time.

Of course, Sonic has a ton of other dessert options on the menu, in addition to all of these, including a few more that feature Oreos, if that's your thing. There's the Oreo Peanut Butter Shake. The Oreo Chocolate Shake. The Oreo Cheesecake Shake. The Oreo Sonic Blast, which seems to be a thicker milkshake that can also be eaten with a spoon. (Like a Dairy Queen Blizzard, for anyone's who blended ice cream point of reference in DQ instead of Sonic.) Point is, there's a lot of Oreo stuff and Oreo Stuf at Sonic.

As for other deals Sonic has going on at the moment, there's Family Night, which means half-price cheeseburgers every Tuesday from 5 p.m. until close. This includes only the single-patty Sonic cheeseburger, so don't get any ideas. There's also a daily Happy Hour from 2 p.m. to 4 p.m. that features half-price drinks and Slushes (milkshakes don't count as a drink, so don't get any more ideas) and 99 cent corn dogs.

There's a lot going on at the fast food chain, but if you want to check out those cake batter shakes, it's probably worth going after 8 p.m. If you live somewhere hot, it'll be easier to brave the heat by then, too.