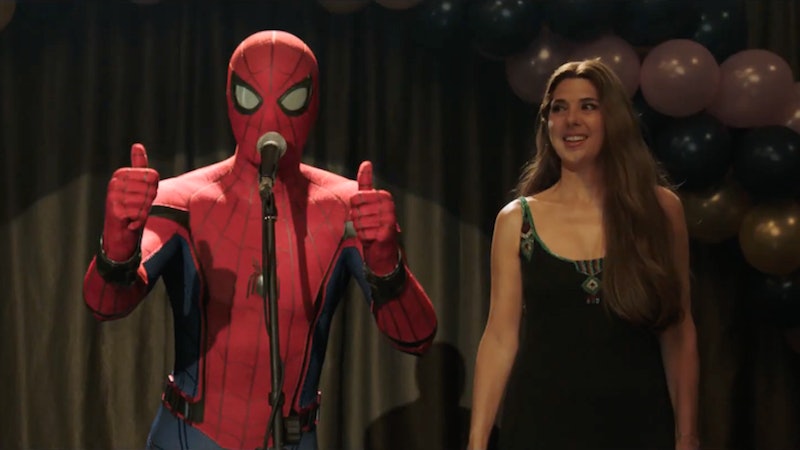 While Spider-Man fans are still reeling from the recent report that the franchise is leaving the Marvel Cinematic Universe, Sony has decided to try and set the record straight. Sony's statement about Spider-Man leaving the MCU claims the news has been "mischaracterized" — and left the door open to working with Marvel once again in the future.

In a statement obtained by Bustle (which they also shared on Twitter), a Sony Pictures spokesperson explained, "Much of today’s news about Spider-Man has mischaracterized recent discussions about Kevin Feige’s involvement in the franchise. We are disappointed, but respect Disney’s decision not to have him continue as a lead producer of our next live action Spider-Man film." (Bustle also reached out to representatives for Disney, Tom Holland, and Marvel for comment.)

The statement continues, "We hope this might change in the future, but understand that the many new responsibilities that Disney has given him – including all their newly added Marvel properties – do not allow time for him to work on IP they do not own." Sony ended their statement by praising Feige and his work, and acknowledging the influence that he and the MCU have had on the Spider-Man franchise over the past few years. "Kevin is terrific and we are grateful for his help and guidance and appreciate the path he has helped put us on, which we will continue," the studio wrote.

While Sony's statement still leaves fans with plenty of questions about the future of Spider-Man and the MCU, it does seem to imply that the source of the studio's disagreement with Disney was regarding Feige's ability to produce new Spider-Man films while also balancing all of the other properties Marvel owns, though other reports suggest it all came down to money. According to The Hollywood Reporter, Disney and Sony had an unusual partnership regarding the Tom Holland films, that left the rights to the franchise in Sony's hands while allowing Peter Parker to appear in the Avengers films and Captain America: Civil War.

Now that the relationship has fallen apart, it seems unlikely that Holland's Peter Parker will appear in any future MCU films, despite the fact that Far From Home seemed to establish him as one of the new leader of the Avengers. Removing him from the MCU also poses a problem for the fact that the relationship between Holland's character and Robert Downey Jr.'s Tony Stark was a central theme for Homecoming and Far From Home, as well as Avengers: Endgame. Without the rights to Spider-Man, the remaining Marvel characters wouldn't be able to reference Peter and the other iconic Spider-Man characters.

Though it still remains to be seen how the dissolution of Sony and Disney's relationship will affect future MCU films, fans can at least take comfort in the fact that Sony will release at least two more Spider-Man movies starring Holland. According to Deadline, Homecoming director Jon Watts is set to return for the new films, along with Holland and the rest of the films' cast. The outlet also reports that the studio feels confident about those two films, as they feel that Feige and his team at Marvel have set the tone for future Spider-Man projects, even if he isn't directly involved with the new movies.

Marvel fans still have plenty of questions about how Sony and Disney's deal will affect the Spider-Man franchise and the MCU going forward, but based on their statement, it seems as if Sony still has hope that Peter Parker will once again take his place among the Avengers, sometime soon.

More like this
Zendaya Shares Intimate Photo With Tom Holland To Wish Him A Happy Birthday
By Bustle Editors
The First 'Percy Jackson & The Olympians' Teaser Comes With An Ominous Warning
By Grace Wehniainen
Nicola Coughlan Shared A Lady Whistledown Excerpt From ‘Bridgerton’ Season 3
By Grace Wehniainen, Alyssa Lapid and Sam Ramsden
The New Bachelor Will Be Announced Next Week & Here Are The Top Contenders
By Grace Wehniainen
Get Even More From Bustle — Sign Up For The Newsletter