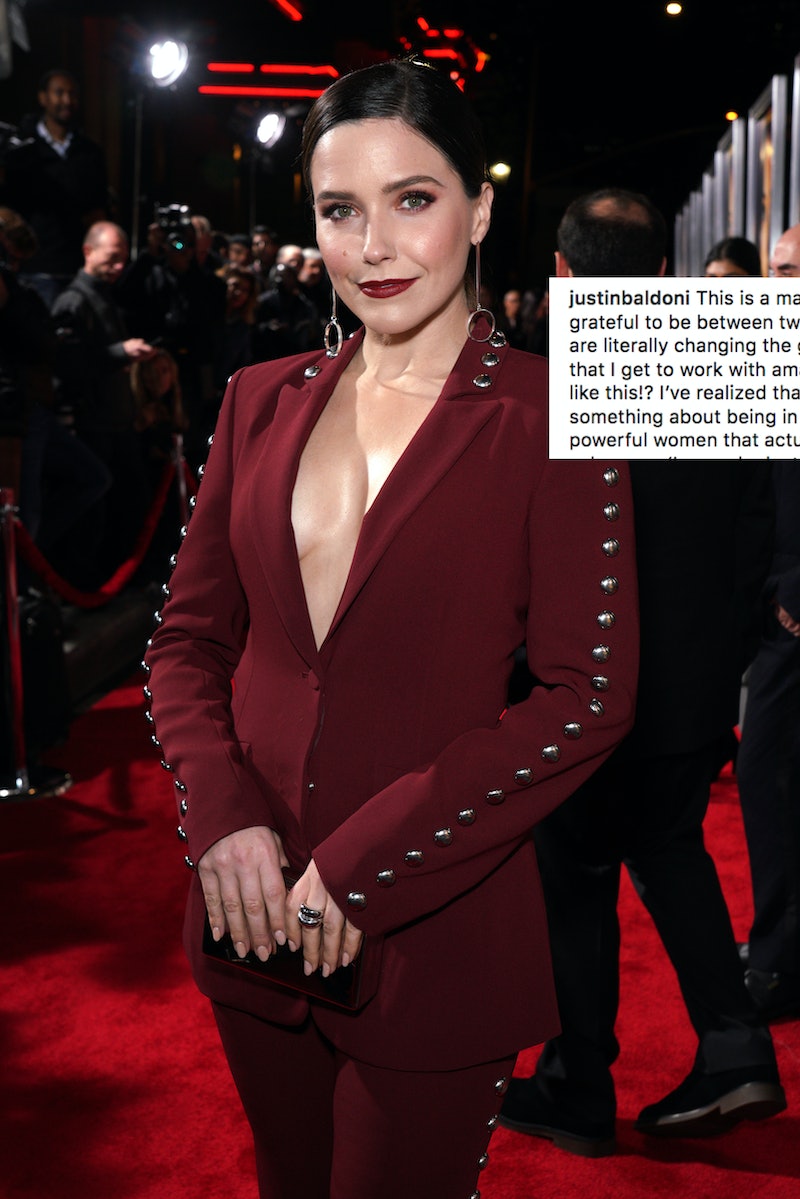 Talk about some amazing casting news. Sophia Bush will make a cameo on Jane the Virgin for The CW series' final season, which officially returns on March 27. The exciting announcement was made on Instagram on Feb. 20 by Justin Baldoni, who portrays Rafael Solano in the drama.

He posted the happiest selfie with Gina Rodriguez (she obviously plays the title character in Jane the Virgin) and Bush. In between raving about both leading women, Baldoni even managed to drop a cryptic hint about Bush's mysterious character. Part of his caption read,

"I'm so grateful that the supremely talented, kind-hearted and bad ass feminist- social justice warrior @sophiabush who I LOOOVE and adore came to play with us on @cwjanethevirgin this week. I can’t tell you who she is playing except that some of you may not be happy about it #canttellyou #sorrynotsorry #thefinalseason #march27."

In the spirit of Rogelio, let's repeat Baldoni's last sentence for emphasis: "I can't tell you who she is playing except that some of you may not be happy about it." What's that now? Who the heck could Bush be playing? Of course, she could possibly be coming on as a love interest for either Rafael or Brett Dier's Michael, who somehow miraculously returned from the dead at the end of Season 4. Or, you know, maybe Bush will appear as Sin Rostro, who really likes to wear masks.

All that said, since Bush is only making a cameo her character probably won't be around long enough to cause too much trouble — well, maybe. This is a telenovela after all.

Whatever kind of impact Bush's character will leave on Season 5, it will certainly be a long-lasting one, just like the former One Tree Hill star does in all of her works. Like Baldoni also wrote next to his frame-worthy Instagram,

"This is a man who is very grateful to be between two women who are literally changing the game. How cool that I get to work with amazing humans like this!? I’ve realized that there’s something about being in the presence of powerful women that actually grounds and calms me. (I mean look at who I married @emilybaldoni 😜💪❤️)."

It's really no surprise that Bush is starring in the show Rodriguez helped put on the map. For those unaware, the two talents consider each other "soul sisters."

Back in September 2015, they had a Twitter exchanged that led to them building a strong connection and friendship. It all began when Rodriguez tweeted, "Number one rule in my house, if you ain't got nothing nice to say, zip it! Lol." Bush replied, "Preach girl. Also, slay. Keep fighting the good fight. I'll never understand the point of tearing people down rather than lifting them up." Her comment led to Golden Globe winner Rodriguez replying, "That is why I believe we could be soul sisters," which Bush responded, "IN!"

From that moment on, they've been supporting and praising one another. That's what true soul sisters do. It's unclear if Rodriguez and Bush will share any screen time together on Jane the Virgin, but here's hoping they do. Watching them finally act together would not only make for a truly memorable TV moment, but also an even more exciting final season.