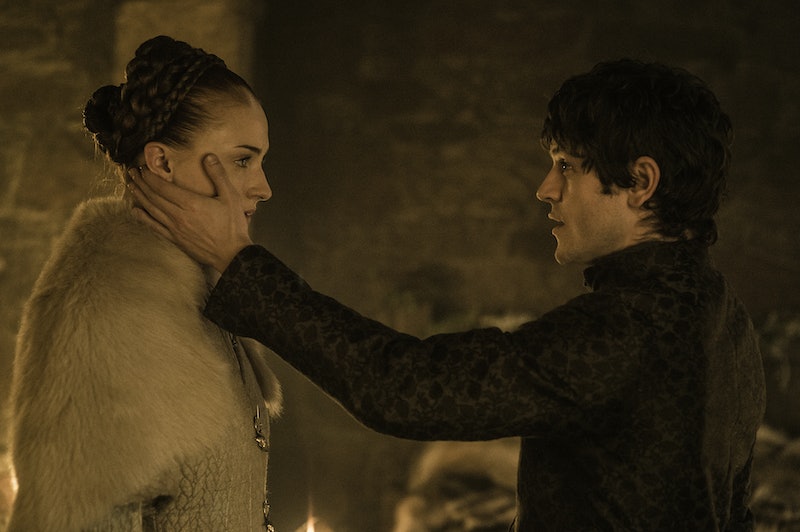 Sansa Stark has been through a lot over the course of Game Of Thrones' previous seven seasons. But there's one scene that many fans have always felt took the character too far. In Rolling Stone's latest cover story, Sophie Turner addressed Sansa's rape scene in Season 5, saying that she disagrees with the criticism of that Game Of Thrones moment. In fact, she thinks that scene with Ramsay Bolton ended up being an important step in Sansa's journey towards self-empowerment.

In Season 5, Sansa married the overly cruel Ramsay Bolton (Iwan Rheon), who raped her in front of Reek/Theon (Alfie Allen). The brutal scene was not in the original books, but added for the show, which upset fans who felt it was an unnecessary plot device. As The Daily Beast pointed after the 2015 episode, some female fans refused to watch the series following the scene. The website The Mary Sue, aimed at women who love nerd culture, even stopped promoting Game Of Thrones after the episode, stating, "We simply can’t bring ourselves to be excited by a product which no longer meets our needs as fans.”

In her interview with Rolling Stone, published on Tuesday, March 26, Turner addressed the controversy. "I think the backlash was wrong because those things did happen,” Turner said, referencing Game Of Thrones' medieval roots. “We can’t dismiss that and not put it in a TV show where it’s all about power — and that is a very impactful way to show that you have power over somebody.”

Turner added that the scene was a turning point for Sansa, who ended that season getting revenge on Ramsay by having him eaten by hungry dogs. "Killing him with the dogs, that was the most satisfying scene," Turner told the magazine. "It made me so emotional because I’ve been waiting so long for her to stand up to the people who have done her wrong.”

Since then, Turner said, Sansa has shown how powerful she is, despite being underestimated for much of the show. Some fans even think Game Of Thrones could end with Sansa on the Iron Throne, something that delights Turner, who admitted that she had longed for audiences to see her character as strong, like Maisie William's Arya Stark.

"[Williams] got to do all these sword fights and be the badass," Turner explained. "I was like, ‘I know my character is very powerful.’ Sansa adapts better than Arya." In her opinion, Arya would not have been able to survive all that Sansa went through, but that's only become more obvious now as Sansa has shown how resilient she is. "It was really frustrating how slow it was," Turner says of Sansa finding her strength, "but it just makes it all the more satisfying. I’m happy she’s only just coming into her power now.”

In fact, Sansa's journey from lovesick teen to powerful leader has been a great inspiration for Turner herself, helping the actor find her own power in Hollywood. “There’s a lot of Sansa in me,” Turner told Rolling Stone. “You go into something and you think it’s going to be a huge dream, and then you figure out, ‘Oh, wait. I have to be very strategic about everything.'"

Clearly, for Turner, without the Sansa rape scene, the character wouldn't be the powerful, decisive, and clever leader she is now. It may have upset viewers, but it helped turn Sansa into the woman and role model she is today.

More like this
Alicent's Green Dress In 'House Of The Dragon' May Be An Act Of War
By Kadin Burnett
Nicola Coughlan Shared A Lady Whistledown Excerpt From ‘Bridgerton’ Season 3
By Grace Wehniainen, Alyssa Lapid and Sam Ramsden
This Episode 6 Moment Foreshadows Viserys' Fate On 'House Of The Dragon'
By Grace Wehniainen
The 'Andor' Timeline, Explained
By Gretchen Smail
Get Even More From Bustle — Sign Up For The Newsletter