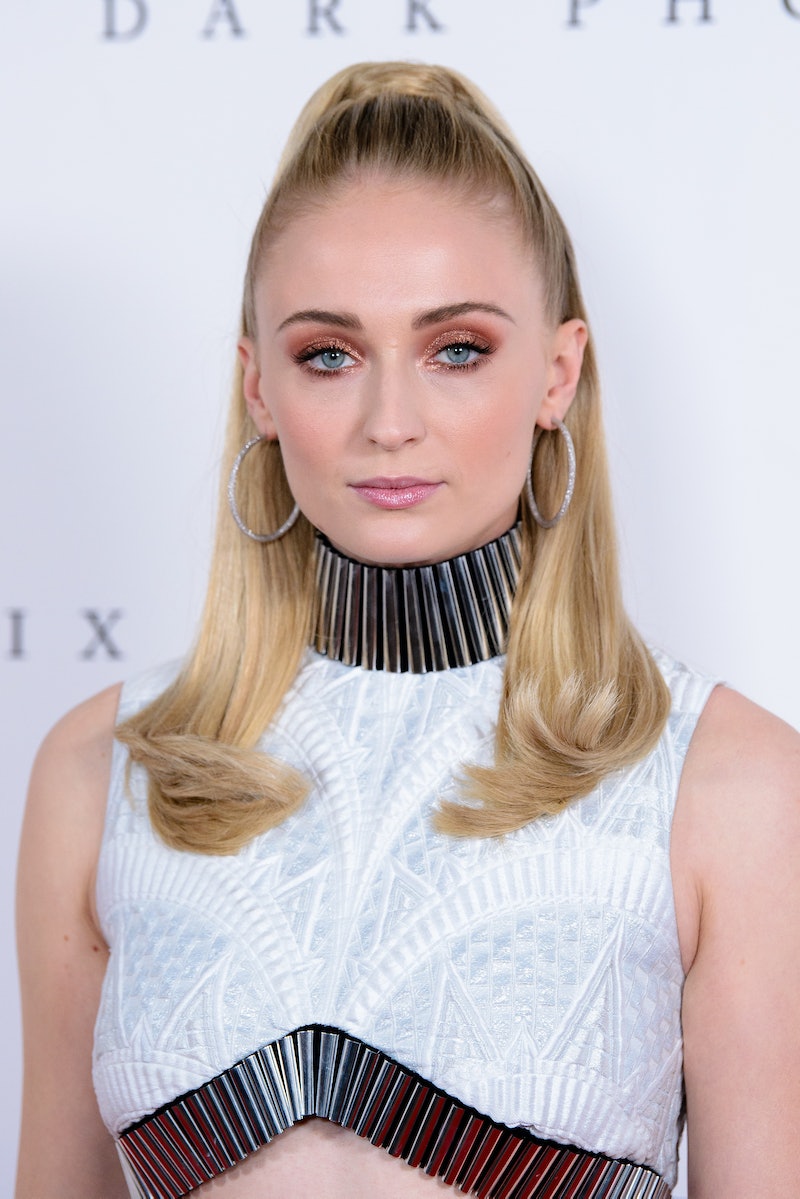 Hide all the scissors in your house, because after you see Sophie Turner's new haircut you will be tempted to follow suit. Sophie Turner got blunt bangs, and the former Game of Thrones actress looks nearly unrecognizable. Turner is currently on a press tour for X-Men: Dark Phoenix, where she has been spotted with her usual, forehead-baring blonde style. But on May 23, she stepped out of her hotel in London for her next press engagement with eye-skimming fringe.

Now the question is whether Turner's bangs are real or clip-ons. It's pretty common for A-listers to add fringe extensions for red carpets or press events, especially if an outfit calls for it. It might be possible that these bangs are temporary, especially since Turner was captured by paparazzi earlier on May 23 sans fringe.

While it was unclear where Turner was headed earlier in the day, photographers caught her stepping out of a service car wearing a red and black paisley shirt and high-waist red leather pants. Her now-signature blonde hair was styled into loose waves, but there were no bangs in site.

It's completely possible that Turner got a haircut in the middle of the day in her hotel room. Celebrity stylists frequently make house calls, and Turner clearly had a glam team that got her ready for her next press event today. But the permanence of the bangs is still to be determined.

The stylist behind the bangs was Christian Wood, who has been doing most of Turner's premiere tour hair. His celebrity clientele includes Rosie Huntington Whiteley, Jessica Chastain, Emily Ratajkowski, and Amanda Seyfried, making him famous in the red carpet crowd.

Throughout Turner's press tour, Wood has been quietly posting each of her hair looks onto his Instagram. The fringe look was also added, but without much fanfare. There was no caption that mentioned a major haircut change, there was no Instagram Story that documented the hair falling onto the ground, and no one in the comments was freaking out over the blunt chop. Turner also didn't post the look onto her own Instagram.

Seeing how this hair transformation is taken as no big deal, this new fringe could just be a pair of clip-on bangs. Time will only be able to tell, but chances are that we will see Turner in a new hairstyle and sans bangs by tomorrow morning.

There is a whole host of celebs who prove that bangs extensions are a popular choice, and that they're nearly impossible to tell if they're fake.

Regardless of whether Turner's bangs are fake or real, the blunt look works great on her. The fringe falls into her eyes and accents her loosely straightened blonde hair. This will definitely inspire a league of haircuts this summer.