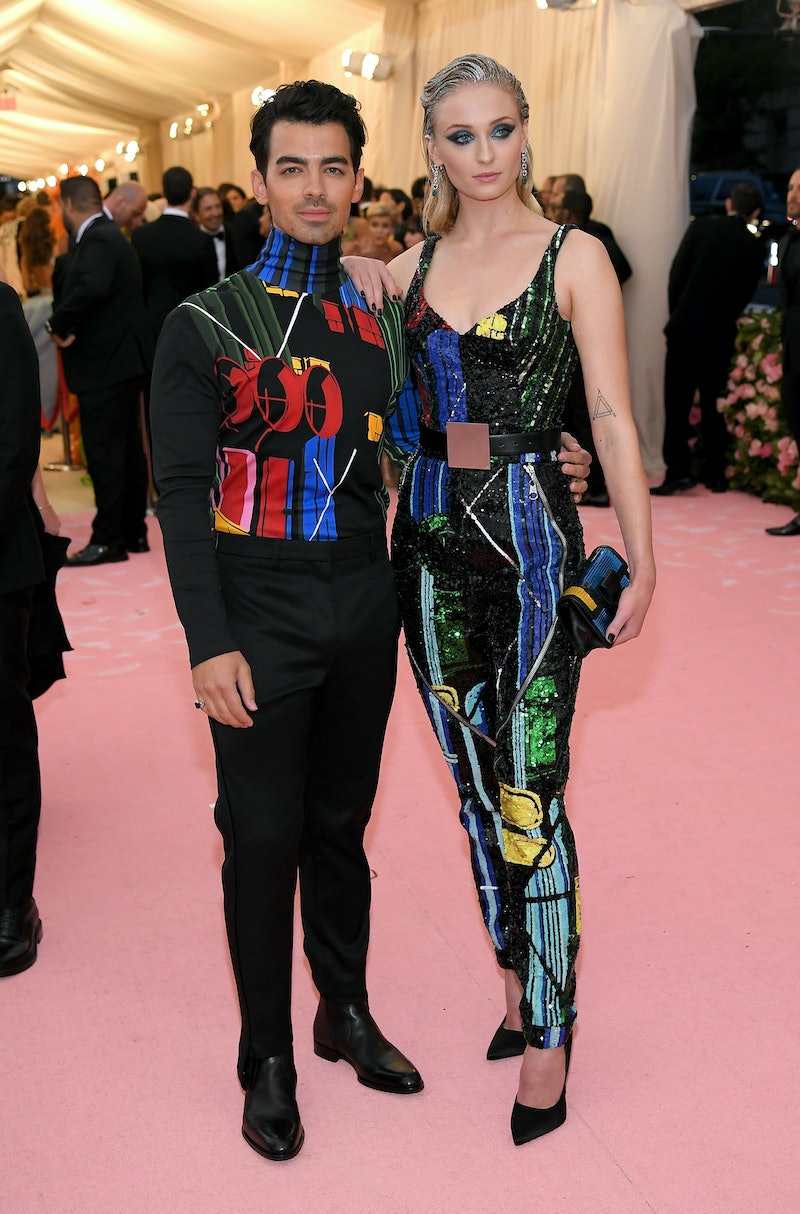 These newlyweds are in sartorial sync. Sophie Turner and Joe Jonas wore matching pantsuits to the 2019 Met Gala that made the pair look like modern, fashionable superheroes. After the duo staged a surprise wedding, officiated by an Elvis impersonator, after the Billboard Music Awards last week, the Met Gala marked their first official red carpet appearance as a married couple. They brought it in expertly coordinated black ensembles with pops of color that mimicked the pages of a graphic novel. Turner and Jonas were matchy matchy but never in a gimmicky way. Their outfits fully complemented one another.

The Game of Thrones actor swapped vows with her new husband will wearing a sick white jumpsuit with a camisole top, and opted for a similar silhouette for fashion's biggest night. Turner went with a sleeveless, custom Louis Vuitton outfit that was actually a two-piece even though it looked like a jumpsuit. It featured a black base, a belt, bold prints on the legs, and a matching tiny clutch.

Turner wore her blonde locks swept off her face in a glittery, wet-look 'do that you may have missed the first time you peeped her outfit. She also slayed blue-green smoky eyes with dramatic wings. She skipped jewelry for the most part, going bare-necked and bracelet-free while rocking drop earrings.

Wella Professionals Celebrity Stylist and ghd Brand Ambassador Christian Wood explained his inspiration for Turner's coif, which nodded to the event's "Camp: Notes on Fashion" theme. "I wanted it to have a futuristic fashion feel, while still being young and fresh," he said in the press materials received by Bustle. "To me, glitter is the ultimate element when envisioning the camp theme."

The Jonas Brothers vocalist wore solid black trousers, while his black shirt had a high turtleneck collar and boasted blasts of blue, red, green, and yellow courtesy of the pattern. He totally crushed it.

Overall, the couple's outfits struck a balance. The bright pops never overpowered one another and the end result was completely cohesive.

Ultimately, Turner and Jonas made quite a splash at their red carpet debut as husband and wife. Turner's stylist Kate Young offered some insight on the couple's look, telling PEOPLE that "Joe has his own style. But yes, they like to coordinate. They tend to do that."

Turner has been favoring pants lately — not just at the Met Ball or her impromptu wedding. She wore this paisley print jumpsuit with power shoulders to the 2019 Billboard Awards ceremony before swapping vows with Jonas.

The couple always looks amazing when out and about at other public functions. At the 2019 Vanity Fair Oscar party, they were a dashing pair. His white linen suit, minus a tie, was an excellent complement to her gilded gown.

Back in October 2018, Turner and Jonas stepped out in perfectly matched black and gray ensembles. It was an exercise in "glamsual" couple's dressing.

Did you notice the subtle trend? Turner and Jonas like wearing matching black outfits with a twist. Each adds their own flair to their outfits while looking terrific and as though they were made for each other.