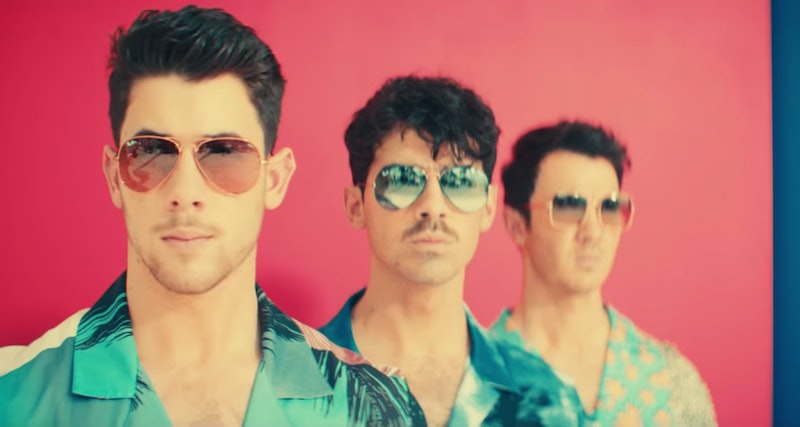 The Jonas Brothers may be "suckers," but they're also feeling pretty "Cool" about it, as their new single and music video indicates. But their newest single isn't just about showing off their new chill vibe, it's also about looking back at what brought them there. In fact, the Jonas Brothers' "Cool" music video is full of references and Easter eggs. And, honestly, it's a gift to fans who have been following them since their Disney days. Even if you're newer to the JoBro fandom thanks to their recent reunion, the Easter eggs in "Cool" will make you realize that you're more invested in Kevin, Joe, and Nick's lives than you had previously thought.

It may only be April 5, but the Jonas Brothers are serving up some "song of the summer" goodness with "Cool." The music video takes place poolside and at the beach, and is full of summer fun. In the video, the brothers get their '80s on with their Miami Vice-like attire; boomboxes, and nods to Duran Duran's "Rio" and Elton John's "I'm Still Standing."

Thanks to these 1980s tributes and the obvious "cool" and "hot" parallels, fans are convinced that "Cool" is a sequel to their 2008 song "Burnin' Up." And, as the video highlights, the Jonas Brothers are certainly embracing their past hit — as well as everything else that's brought them to this point of "feeling so cool."

So as you listen to their new single on repeat, soak up the Jonas Brothers' "Cool" vibes with all of these fun references.