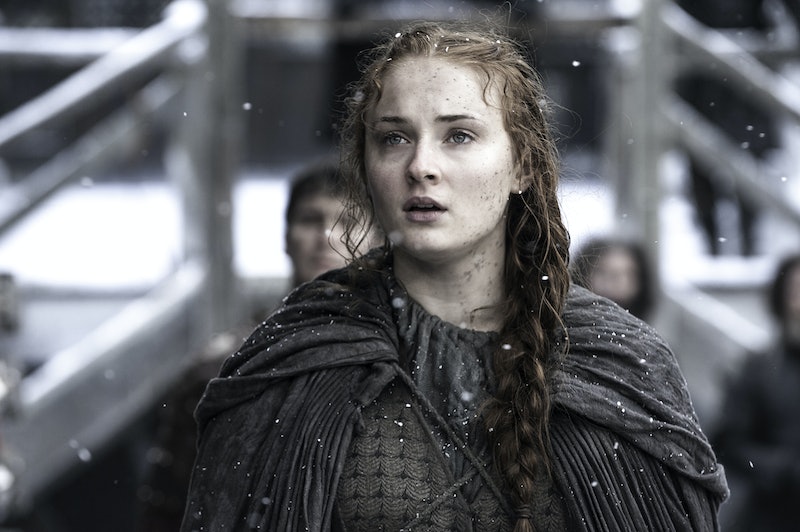 I've honestly been a very good nice girl and stayed away from speculation surrounding the next season. Mostly. But I'm pretty sure Sophie Turner just revealed a Game of Thrones character who survives Season 7, and I am reveling in this spoiler. The actress, who has played Sansa Stark on the HBO series since its first episode in 2011, attended the BAFTAs on Feb. 12. There, she dropped a not-so-subtle hint on the red carpet about someone who makes it all the way to Game of Thrones' final season, which is a big deal for the famously bloody series.

It feels like all you have to do is get emotionally attached to a character and then they're struck down in the next episode. So, knowing even one character who survives into GoT's Season 8 is huge. I'm also going to announce which character that is just slightly down this page, so I recommend clicking away if you don't have an interest in absorbing that information. Like, possible spoiler alert ahoy.

No premiere date or even episode count has yet been announced for Game of Thrones Season 8, so production is months and months away. But it does appear to be scheduled out, and at least one actor has already worked filming into their calendar as Turner's slip of the tongue revealed.

As it turns out, the surviving character seems to be, well, Sansa Stark. Turner gave this quote about her schedule after being stopped on the red carpet:

"We’re about to start shooting the next X-Men, we’ve just finished shooting Season 7 of [Game of] Thrones, and I’ve got a couple of movies to do before X-Men starts. And then we go on to Season 8."

Oh, do we? Many of characters definitely don't, as they've been killed off or never cast in the first place, so it's very telling that Turner has planned out a spot in her schedule for Season 8.

It sounds like she's pretty busy and has things scheduled one after the other, so it would be silly for her to set aside time without knowing for sure that it would be necessary. It's the kind of admission Turner probably didn't realize in the moment was an admission at all, but I imagine she's kicking herself after the fact for inadvertently dropping such a big spoiler. Congratulations Sansa Stark fans. We get to hold onto her for a little while longer.

More like this
'GoT' Star Emilia Clarke Says She "Just Can't" Watch 'House Of The Dragon'
By Brad Witter
This 'Gossip Girl' Wardrobe Error Has Gone Viral On TikTok
By Alyssa Lapid
'The Last Of Us' Has Officially Been Renewed For Season 2
By Darshita Goyal
Mollie Gallagher Has A Deeply Personal Reason For Taking Up Skating
By Maxine Harrison
Get Even More From Bustle — Sign Up For The Newsletter
From hair trends to relationship advice, our daily newsletter has everything you need to sound like a person who’s on TikTok, even if you aren’t.