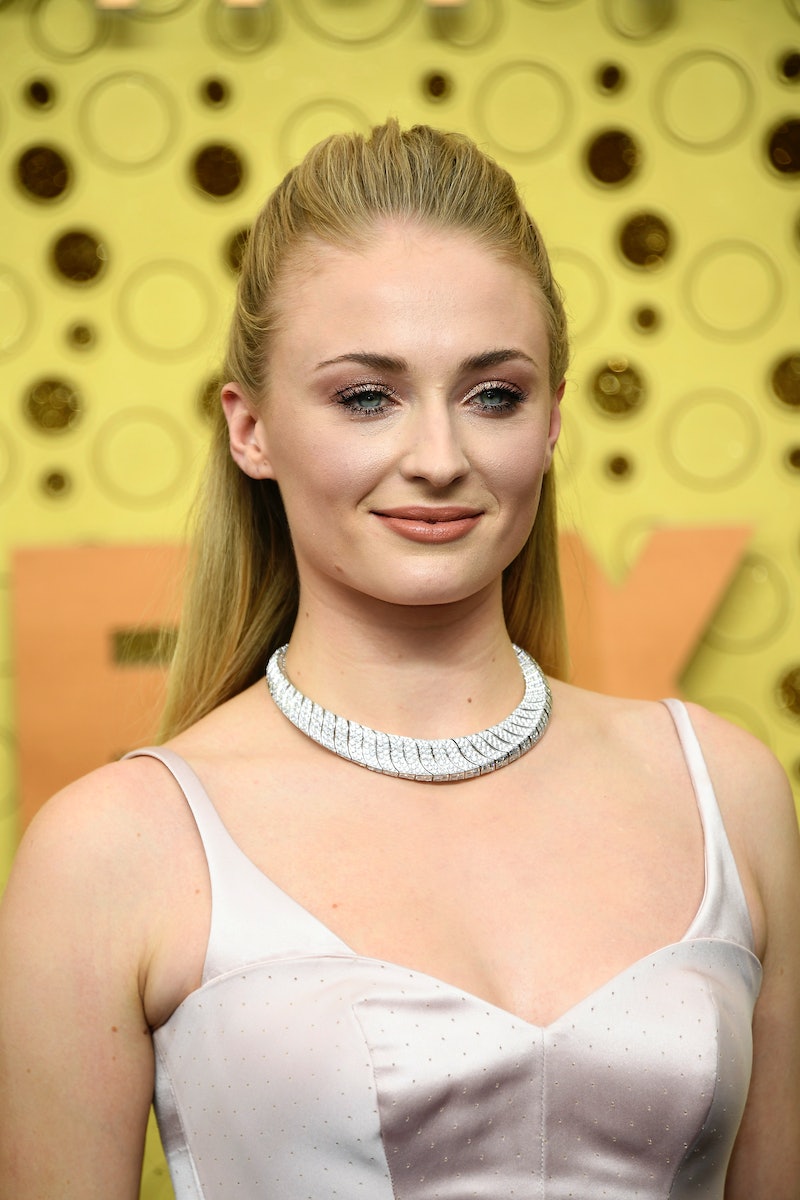 Game Of Thrones may be over, but that doesn't mean we've seen the last of our favorite characters, especially the Stark sisters. Sophie Turner’s 2019 Emmy’s red carpet outfit proves she was always the most fashionable character both on and off the show.

Turner had, by far, one of the greatest character arcs as well as fashion transformations on the HBO hit Game of Thrones. And while the former Queen of the North has stopped displaying her iconic armor-inspired gowns for television, Turner is turning out a creamy blush belted gown for the night’s Emmy affairs. The actor was dressed in an architectural pale pink belted dress that fell to the ground with a small slit overlay on the bottom. It was designed by Louis Vuitton. Paired with a classic silver heel, the ensemble was like a satin version of a Sansa Stark look.

The Dark Phoenix actor wore her hair in a half up, half down style and went completely earring-less, but made up for her naked ears with a bold silver necklace that was also designed by Louis Vuitton, according to Vogue. Red carpet makeup can sometimes be bold and daring or sometimes simple and ethereal. Turner’s look, however, lands somewhere in the middle with her soft peach eyeshadow and black bottom eyeliner that she's worn in some of her previous red carpet looks.

For the 71st Emmy Awards, Turner is nominated for Best Supporting Actress, along with her cast mates including Gwendoline Christie, Maisie Williams, and Lena Headey.

Turner's Emmy red carpet return has been a long time coming since the actor hasn't attended the show since 2016. Regardless of the time past, Turner has consistently captured GoT fans' hearts with her makeup and outfits.

During the actor's 2016 Emmy red carpet appearance, Turner wore a black lace Valentino gown with a cinched accordion waistline and a matching pair of strappy heels. Her seamless bronzy-eyed makeup only enhanced her witchy glam look even more.

Despite Turner's simpler look at the 2015 Emmy Awards, wearing black pants, a purple bodice, and open-toed heels, her outfit is still on par with the '90s supermodel runway aesthetic we've seen her rock time and time again.

In a 2016 interview with Harper's Bazaar, Turner's stylist for the Emmy's Rebecca Corbin-Murray spoke about using the actor's height to her advantage during red carpets.

"She's totally '90s Amazonian supermodel, she loves to play up her height, so she loves a high heel," Corbin-Murray said. "She never likes a hard line on her face, just soft, fresh and dewy makeup. We've been exchanging photos from the New York runways that have that look."

As for her makeup for the awards show, Turner hasn't strayed too far from her grungy-inspired makeup looks of years past.

Turner and her forever beloved character Sansa share an ever-evolving sense of style. And whether or not Turner is crowned a winner at the 2019 Emmys for Best Supporting Actress, she'll always rule the north — and the red carpet.