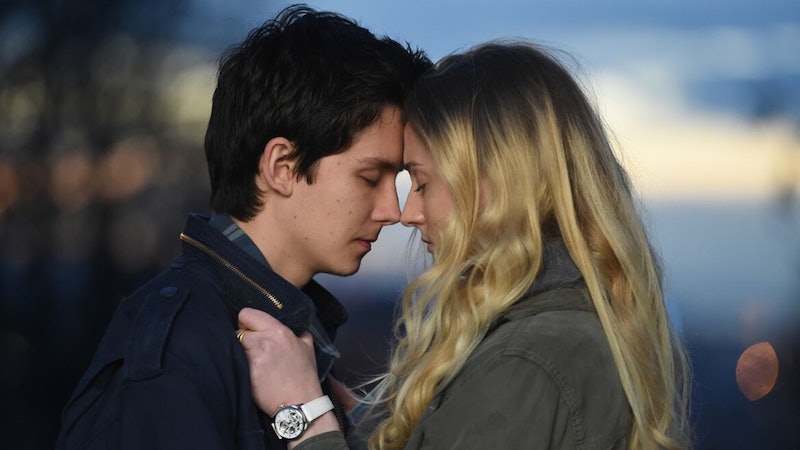 Where this guy's going he doesn't need roads, but he will need to impress Sansa Stark. In Sophie Turner's new movie Time Freaks, she inspires one man, played by Asa Butterfield, to time travel just to win back her love. Surely, her fiancé Joe Jonas would agree that she's worth the risk of unraveling the fabric of the time space continuum for. But as the official trailer for Time Freak shows he may have a second chance, but it won't last forever.

"Nothing focuses your mind like a broken heart," Butterfield's Stillman says after having his broken by Turner's Debbie. It turns out his mind is capable of building a time machine that would make Marty McFly jealous. There's no Delorean necessary, just a cellphone which helps him control when and where he wants to go. In this case, Stillman wants to go back to the first time he met Debbie to re-do their relationship and make sure this time they stay together. "I've created what every broke heart wants," he says. "A second chance."

While his friend Evan (Santa Clarita Diet's Skyler Gisondo) is more interested in other things like flirting with girls and maintaining his hairline with help from Rogaine, Stillman is only focused on getting Debbie back, which might be a bit dangerous. "It could have been different," he says, sounding a bit mad scientist-y. "It's gonna be different."

With shots of Turner looking lovingly at her one-time ex and sweetly urging him to "live in this perfectly imperfect moment" with her, it seems it's all going to his plan. But, when his time machine malfunctions and only allows him to move forward, not back, he's forced to make things work the first time around. Or actually, as Evan points out, his second time around.

So while the trailer shows the lengths Stillman goes to get Debbie back — hello, he built a time machine in his garage! — it never reveals why it is they broke up. Can his relationship with Debbie really be repaired? Should it be? Or, is Stillman too brokenhearted to even contemplate these things? Not to mention, what kind of damage is he doing every time he freezes time? Those are the real questions that can't be answered until the movie is released in select theaters and On Demand Nov. 9.

Time Freak, written and directed by Andrew Bowler, is based on his 2011 Oscar-nominated short film of the same name. And it won't be the only Turner film that will be out in the next few months. Turner is also starring in X-Men: Dark Phoenix, out June 7, 2019. And then, of course, she'll say goodbye to Sansa Stark in the final season of Game Of Thrones.

While fans might be worried about Sansa's future, they shouldn't worry about Turner's. Back in March, Turner told Coveteur that after GoT she plans to get behind the camera. “I would love to be a director in the future," she said. "My next movie that I’m doing, I’m producing as well." That would be the film Girl Who Fell From The Sky about a 17-year-old girl who was the lone survivor of a 1971 plane crash, according to IMDb. "I’ve definitely caught the bug for behind-the-scenes and having that creative control," she continued. "I’m excited to be something more than just an actress and to be able to make decisions on the character.”

Luckily, after Game Of Thrones is over, fans won't have to cross any space-time barriers to reach Turner, they'll just have to head to their local movie theater.