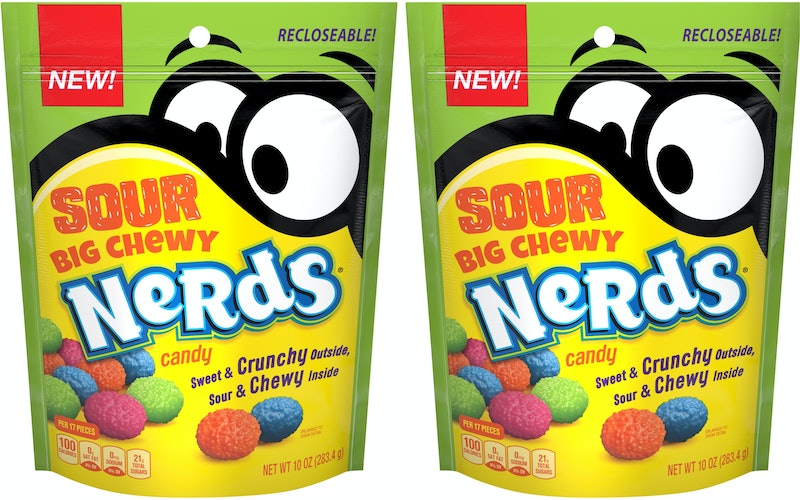 It is not often a classic candy gets an update that reworks every aspect of what made the original famous. Nerds, for example, are the tiny pebbles of tartness you probably almost broke a tooth on as a kid. They typically come in a few different flavors, and were even added to a gummy rope back in the early 2000s. But, the newest chance to the candy is the most radical yet: Sour Big Chewy Nerds are coming to shelves in April 2019, and they have already won an award for taste.

A press release from Friday, March 22, explains the newest member of the Nerds family. Original Big Chewy Nerds launched last year, but now this new variety that promises to push the lip-puckering limit. Sour Big Chewy Nerds are small in size, but larger than the original Nerds. The inside of each candy is chewy, and the exterior is sweet and crunchy. It calls to mind the composition of Skittles or M&M's, but with a shock of sour middle. Each 12-ounce, resealable bag is filled with four different flavors of the chewy morsels: Brainiac Blue Raspberry, Streaming Strawberry Lemonade, Wiki Watermelon, and Blood Orange Byte.

The Sour Big Chewy Nerds really did win an award for being so delicious. According to the press release, the candy received recognition as the "most Innovative New Product Award in the non-chocolate category at the National Confectioners Association's (NCA) 2018 Sweets & Snacks Expo in Chicago." Kelly Peyser, the senior brand manager of Nerds (talk about a dream job), also said the new treat quickly became a favorite of classic Nerds fans everywhere, as its "unique dual-texture and bold flavors" is unlike many other confections on the market now.

She expands on the newest product further in the press release, saying, "After receiving overwhelmingly positive feedback from consumers across the nation for our Big Chewy Nerds, it only made sense to take things up a notch with the introduction of Sour Big Chewy Nerds."

"We are constantly looking for new ways to excite our fans, and are thrilled to satisfy not only sweet tooth cravings, but sour ones, too!" said Peyser in the press release.

Nerds are manufactured by Ferarra Candy Company, which is also responsible for a number of other favorites you'll remember from childhood. In addition to the newest Nerds, Ferarra has recently introduced the Trolli Brite All-Star Mix, which is pack with sour gummies shaped like crawlers, sloths, octopuses, llamas and tiny hands. Strange? Absolutely. Delicious? You know it. Ferarra also recently released an updated Butterfinger with an even better recipe.

But, if you have to pick one, the choice is clear, and sour. Find Sour Big Chewy Nerds on shelves starting in April 2019.

More like this
On TikTok, Tinned Fish Date Night Is The Latest Viral Food Obsession
By Emma Carey
20 Smart Devices Under $35 That’ll Change The Entire Vibe Of Your Home
By Emma Carey
12 Easy Halloween Costumes You Can Wear With A Denim Jacket
By Kirsten Nunez and Bustle Editors
The 5 Best Sheets For Your Purple Mattress, According To Reviewers & The Brand
By Vanessa Spilios
Get Even More From Bustle — Sign Up For The Newsletter