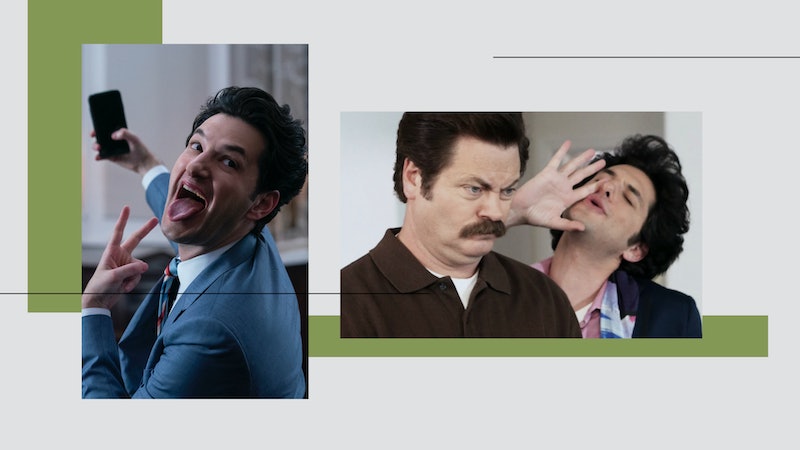 If you couldn't tell from his name alone, Ben Schwartz's Space Force character F. Tony Scarapiducci is essentially a mix between Anthony Scaramucci and the social media brand F*ckJerry (he's referred to as "F*ckTony" several times throughout Season 1). And as media manager for the newest branch of the military, Schwartz's character is both way out of his depth and eager to prove himself — he just doesn't know how yet. This on its own sets F. Tony apart from Schwartz's other famous TV character, Parks and Recreation's Jean-Ralphio, whose main interests include clubbing, slacking off, and being (in his signature falsetto) flushed with caaaasshh!

Schwartz knew there would be Jean-Ralphio comparisons, telling Bustle that it was "one of the biggest conversations" he had with series creators Greg Daniels and Steve Carell, who helped the comedian differentiate between his two onscreen personas. The first thing they did was cut his hair, he explains, so it didn't look like Jean-Ralphio's gigantic pompadour. Fortunately, Tony's clothes were also more muted than Schwartz's former character's eccentric get-up, since he works for the military and not Entertainment 720. "I can have a little bit of flair, but I didn't wear like, crazy sneakers," he says of Tony's style.

Aesthetics aside, Tony also has much more depth than his chronically self-deluded Parks and Recreation character. The Middleditch & Schwartz star explains that because Jean-Ralphio was a smaller character with less screen time, he just got to come into the frame and "jump around... more like a very fun, energetic cartoon." Tony, the comedian clarifies, is "more of a character in grounded reality."

But it's also clear that Tony has had his share of personal and professional snafus. For instance, we learn that Janina Gavankar's character leaked some of his old texts, which were bad enough to get him fired from American Apparel. Later on, the media manager realizes why, exactly, you should vet all of your recruits before sending them on a high-profile space mission.

But despite his general goofiness, Schwartz points out that his character is actually quite competent. "All these people are good at what they do, but they've never had a job that is this intense," he explains. "Carell's character has never been the head of a military branch... Malkovich's character has never had to run something this enormous." And while he says that Tony is "good at being a media manager, he has to learn how to be a media manager for Space Force." And that, like any new job, takes time.

Indeed, running a military Twitter account is a far cry than posting about American Apparel's sexy-yet-functional clothes. Is "dunking on the Twitter accounts of sassy fast food brands," as he explains to General Naird in Episode 1, really the way to run the Space Force's social media? Probably not, but his enthusiasm is contagious.

But whereas Jean-Ralphio made the same mistakes time and time again, Tony learns from his failings. "He's gotten fired before, he doesn't want to get fired again, so he's gonna play it a little bit more safe," Schwartz says of his character. "And when he gets in trouble now, they're real stakes, as opposed to, you know, if [he makes] a mistake with American Apparel, he loses his job at American Apparel. But now there's real stakes involved."

This, in turn, forces Tony to grow up. Where Space Force starts out, his main duty seems to be presenting Naird with a daily tweet for him to approve (the one we see in Episode 1 involves Wendy's new hamburger and lightsabers). But as Season 1 progresses, so do his responsibilities. "What starts with just Twitter, you see [Tony's] role grow," Schwartz explains. "And then as things get heavier, and more things happen, his responsibilities grow."

This character development was particularly exciting for Schwartz. "Watching him start to show up for his job and stuff like that is big," he says, pointing out how Tony starts owning up to his mistakes (like admitting he was wrong after the aforementioned background check fiasco), "figuring out what's going on, and trying to do his job as best as he can."

But since this is still a Ben Schwartz character we're talking about, Tony's lovable, obnoxious goofiness is part of his comedic signature. If his character ever lands on the moon in any future seasons, Schwartz theorizes that he would auction off his first words as a sponsored tweet. "'I'm gonna tweet on the moon," Schwartz pictures F*ckTony saying. "I'm gonna be the first person to ever tweet on the moon. Who wants it? Come on. Ben & Jerry's? You want it? Okay. #ad #BenandJerrys #BootsontheMoonIceCream."