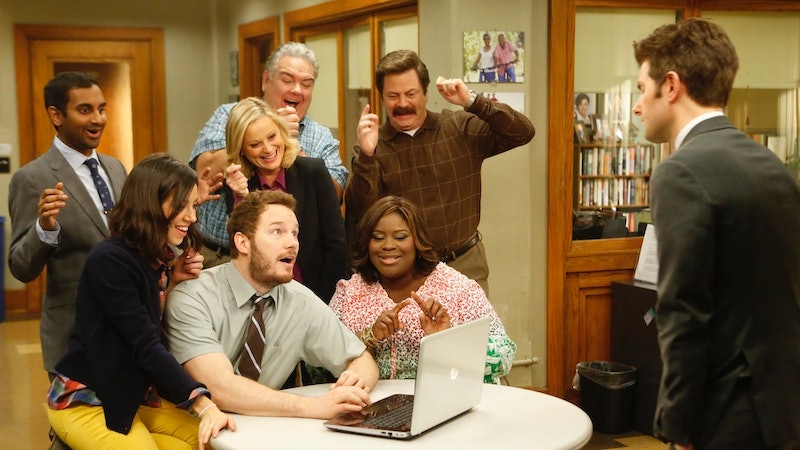 Celebratory waffles are in order: the Parks and Rec reunion special will feature special guests, according to co-creator Mike Schur. For a one-time-only, COVID-19-themed episode to benefit Feeding America, Amy Poehler, Rashida Jones, Adam Scott, Aziz Ansari, Nick Offerman, Aubrey Plaza, Chris Pratt, Rob Lowe, Retta, and Jim O’Heir will reprise their Parks and Rec roles for a special on NBC. And while that news alone was enough to send fans into a frenzy, now Schur is saying that “probably half a dozen” familiar faces will return for the special on April 30.

“It wouldn’t have been a Parks and Rec special if there hadn’t been some of the super fun and enjoyable side characters and tertiary characters who used to pop up on the show being involved,” Schur said, per Variety. “So you’ll get a decent number of them as the show goes along.” Per the publication, the first face that will appear on screen will actually not be one from the series’ regular cast. So, who could return for the special?

Perd Hapley (Jay Jackson), Pawnee’s anchorman, is a given. NBC shared a teaser on Twitter on April 29 that featured Leslie Knope (Poehler) and Ben Wyatt (Scott) dialed into a segment of Ya’ Heard? With Perd. “You heard it here first, ladies and gentleman,” Perd says in the clip. “And the ‘it’ that you heard was the thing that these people just said.”

The reunion special will follow Leslie as she attempts to stay connected with friends and colleagues during quarantine. The series, which ran for seven seasons between 2009 and 2015, followed a group of city government employees in a small town. Given the time jump in the series finale with Gary as mayor, Chris and Anne in Michigan, and Leslie, Ben, April, and Andy in Washington, the reunion will likely pick up some time after this timeline.

More like this
The 'Kenan & Kel' Reunion On 'SNL' Took A Dramatic Turn, Thanks To Keke Palmer
By Brad Witter
The First Trailer For 'That '90s Show' Includes So Many Nods To The Original Series
By Jack Irvin, Alyssa Lapid and Grace Wehniainen
Lindsay Lohan Just Recalled A Hilarious 'Parent Trap' Story
By Sam Ramsden
Courteney Cox Recreated An Iconic 'Friends' Scene To Surprise Fans
By El Hunt
Get Even More From Bustle — Sign Up For The Newsletter