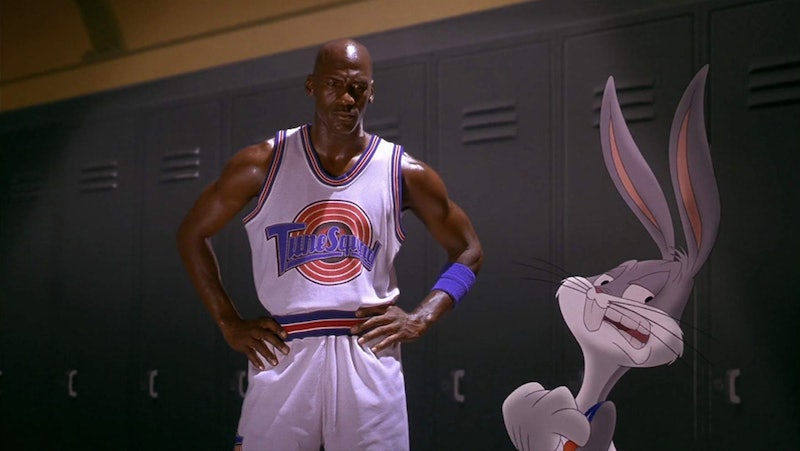 If you grew up in the '90s, chances are you loved Space Jam and have been eagerly awaiting the upcoming sequel that's reportedly filming later this year. But, in a tweet on Saturday, Jan. 5, Tony Hawk revealed he almost starred in a Space Jam sequel way back in 2003. That's long before the untitled 2019 sequel was in the works. And the reported sequel's name? Skate Jam, of course.

Hawk is a professional skateboarder who was everywhere in the '90s. The athlete would have been a perfect choice for a Space Jam follow-up at the time, as any sports enthusiast would likely attest. On Twitter, Hawk explained the reported pitch for Skate Jam: "In 2003, I was requested to meet with Warner Brothers about doing a film tentatively titled Skate Jam. They were bringing back Looney Tunes with Back in Action & then wanted to start on my project immediately. A week later Back in Action bombed & Skate Jam was shelved forever." Thanks a lot, Back in Action.

Looney Tunes: Back in Action starred Brendan Fraser and Jenna Elfman, and mixed live-action scenes with Looney Tunes animation just like Space Jam did, but it failed to become anywhere near as popular as the hit basketball flick. Bustle reached out to Warner Brothers for comment on the reported Skate Jam, but did not hear back at the time of publication. Interestingly, Hawk did recently release an app called Skate Jam — sadly, there's no Looney Tunes characters in the game.

Believe it or not, but Skate Jam and Back in Action aren't the first attempts at keeping the Space Jam franchise alive. Back in 2012, Animated Views interviewed former Warner Bros. animator Bob Camp, who said Warner Bros. tried to make Space Jam 2 in 1997, but it didn't end up working out. Details of the sequel's plot are scarce, but, according to Camp, who was slated to be the storyboard artist for the sequel, there was going to be a villain named Berserk-O!, who had henchmen named O!-No and O!-Yes. But Camp said that he had no idea what the actual plot for the flick was. "They didn't really talk to me about it," he explained to Animated Views. "They just said draw him."

In order to make the film, the studio needed a big name to play the villain. Famed director and comedian Mel Brooks was reportedly in talks to portray Berserk-O!, so Camp modeled the character around his likeness. Despite having a major name attached, Warner Bros. was still missing a key star from the original: Michael Jordan. Once the studio realized that Jordan didn't want to reprise his role, they scrapped the movie in fear that nobody would watch it without the basketball legend attached.

That wasn't the only failed attempt at a sequel, either. Entertainment Weekly reported in 2001 that Jackie Chan was in talks to star in a sequel called Spy Jam. And it also mentioned that there was another sequel in the works: Race Jam, a NASCAR-themed version. That could be how Skate Jam would fit into the franchise as a possible spinoff. But the studio's idea of creating a franchise that'd tackle various stories and sports never came to fruition, and details of how far along the production process was for Spy Jam or any of the others haven't been released.

But, thankfully, the upcoming sequel already feels so worth the 23-year wait. According to The Hollywood Reporter, the film is being produced by Black Panther director Ryan Coogler, with HBO's Random Acts of Flyness creator Terence Nance on board as director. And while it looks like Jordan won't be returning for this one, a modern NBA legend is game: LeBron James.

The basketball star shared to THR how important it is for him to star in this flick. "The Space Jam collaboration is so much more than just me and the Looney Tunes getting together and doing this movie," James said. "It's so much bigger. I'd just love for kids to understand how empowered they can feel and how empowered they can be if they don't just give up on their dreams."

The upcoming sequel is one that fans have been waiting a long time for, but Hawk has left us all to wonder what would’ve happened if we had gotten that now legendary skateboarding spinoff too.