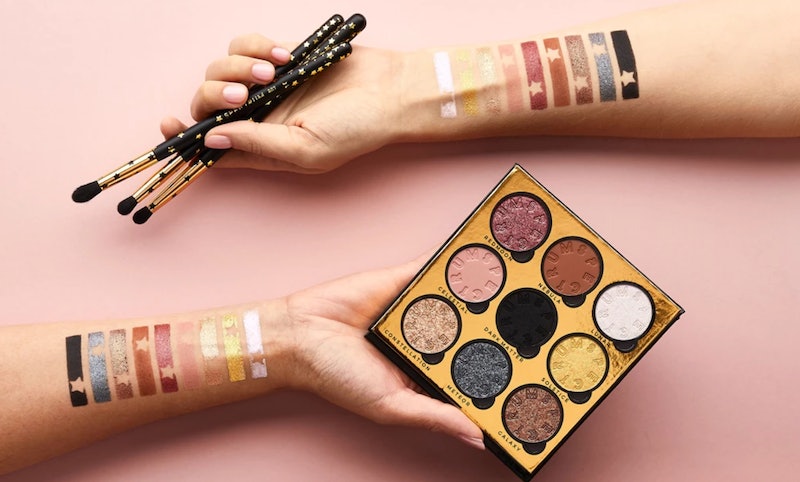 Spectrum is a brand known for its excellently bright makeup brushes that are of professional standard. Founders Sophie and Hannah Pycroft are also familiar to many in the beauty know for impressively starting their now beloved business in their garage in Barry, Wales. The vegan brush brand with humble beginnings has grown massively since it started in 2014. So it makes sense that they would expand to sell more than just brushes, including cosmetics. But what's in Spectrum's first makeup collection? Let's check out the exciting upcoming range.

The Zodiac Cosmetics collection is inspired (as its name suggests) by astrology, and follows on from Spectrum's Zodiac brush line. With everything a mere £12.99 (apart from the eyeshadow palette at £29.99), the line is super affordable, and unsurprisingly the packaging is totally mega.

The star of the show is the Zodiac Eyeshadow Palette, which features nine beautiful shades in three different finishes: three velvety mattes, three intense metallics and three highly reflective duo-chromes. The colour palette is warm and wintery, and every shade is perfect for festive party season. The hues can be worn wet as well as dry, and as with the rest of Spectrum's cosmetics and brushes, it's totally vegan.

Next up is the Dark Matter Mascara, which will have major impact when worn alongside the aforementioned eyeshadows. Spectrum promise the mascara has "intense ultra-black pigment," and gives natural lashes an "out of this world lift with long lasting results." It also contains vitamins C and E to nourish the lashes throughout use.

The brand is also bringing out face makeup, namely liquid and powder highlighters. The powder formula comes in two hues, Sunray and Moonlight, which are champagne/gold and pink colours, respectively. The liquid drops also comes with two colour options, one a pearly shade and the other more of a bronze. While these are great for straight up highlighting, they can also be mixed into foundation and moisturiser, or used on eyelids.

If you're all about this new collection, the good news is you won't have to wait long to be able to get your hands on it at spectrumcollections.com. The eyeshadows and highlighters will drop at 7am on 13 November, and the Zodiac brushes (there's a five piece face set and a six piece eye set) are already out now. With their amazing black and gold colour schemes and starry handles, these are the most magical makeup brushes of the moment.

Claps for you, Spectrum.