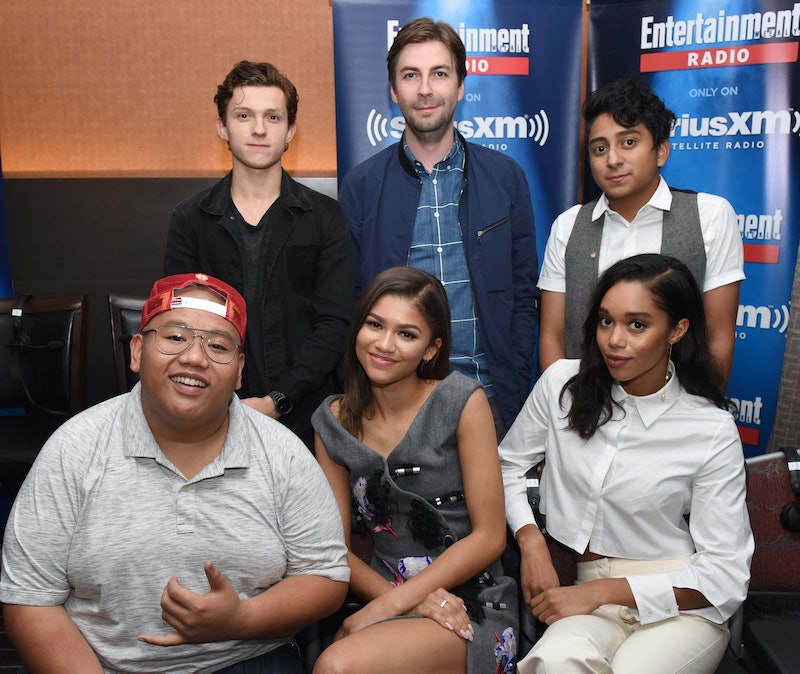 Spider-Man: Homecoming stars Zendaya and Laura Harrier are both young, black actors. And because of this, they'll likely be confused for one another in the media. In fact, as the women recently pointed out on Twitter, they've already been mixed up by outlets, despite being two completely different people. That this happened is frustrating — and that Zendaya and Harrier both seem to expect it to continue is so depressing.

Hollywood has a longstanding tradition of confusing people because they share the same race or ethnicity (Samuel L. Jackson for Laurence Fishburne, America Ferrera for Gina Rodriguez, and so on). It doesn't matter that Zendaya and Harrier are two different people; because they're black, female Spider-Man: Homecoming stars, they're denied their own identities. It doesn't matter that they're playing dissimilar roles, or that they don't actually look anything alike. The actors will be confused for each other because the predominantly white media has a problem when it comes to separating performers of color.

Just last year, a film critic mistakenly wrote that Dev Patel starred in The Namesake, a movie that actually starred Kal Penn, another actor of Indian descent. Earlier in 2016, meanwhile, America Ferrera and Eva Longoria, two Latina actors, joked about being mistaken for other Latina celebs at the Golden Globes after the award show's official Twitter account mistakenly identified Ferrera as Gina Rodriguez. And those examples don't even cover the everyday, less official mix ups that occur in less popular media.

A high profile mix up has yet to occur for Zendaya and Harrier, but the misidentifications have already begun. In April, as press for Homecoming started to really take off, Zendaya retweeted a photo from a British tabloid where Harrier was misidentified as her in a still from the film. "@LauraHarrier how many times you bet this is bout to happen to us? Lmao," Zendaya wrote.

Zendaya and Harrier went on to exchange a few tweets joking about getting ready for months of mix ups and mistaken identities. "Not the first, definitely not the last," Harrier responded, to which Zendaya replied, "And so it begins."

Clearly the stars are gearing up for what is sure to be a grueling press tour, made even more tedious by their constant need to assert their identities as separate women of color. Yet just because Zendaya and Harrier seem to be taking this in stride, judging by their tweets, doesn't mean the media shouldn't try to do better. Spider-Man: Homecoming is a huge step towards diversifying the MCU, boasting not one, but two female black leads, as well as other cast members of color. The media constantly mixing up Harrier and Zendaya would be a major blow to this progress. Of course, mistakes happen, but the fact is that actors of color often get mixed up more frequently than their white counterparts. White, blonde actors Margot Robbie and Cara Delevingne successfully promoted Suicide Squad together without being mistaken for each other (even when they wore matching outfits). I think Zendaya and Harrier deserve the same courtesy.

And all it takes is a little fact checking. Both Harrier and Zendaya already have established media presences, and it is not difficult to find photos of them online and ensure that you're crediting the right actor. This problem is fixable, and yet, too frequently, the media doesn't make the effort to do it. And when people decide not to check their facts, it sends the message that actors of color are not even worth a two second Google search.

Furthermore, if confusing Zendaya and Harrier becomes a common phenomenon during the Homecoming press tour, it could send a dangerous message to audiences. A consistent misidentification of the stars is a huge show of disrespect and makes it seem like young women of color are not worth the courtesy of calling them by their own names. Celebrity culture has a huge impact on daily lives, and the fact that non-white women rarely get to see themselves on screen is already troubling enough. Add to that a disregard for these actors' very identities in media, and you might as well call every young girl of color and tell her that she is interchangeable with any other girl of the same race.

Representation matters, so, media, please, let's do our best to give Zendaya and Harrier the unique, empowering press tours they deserve, and not turn the next few months into a game of who's who.