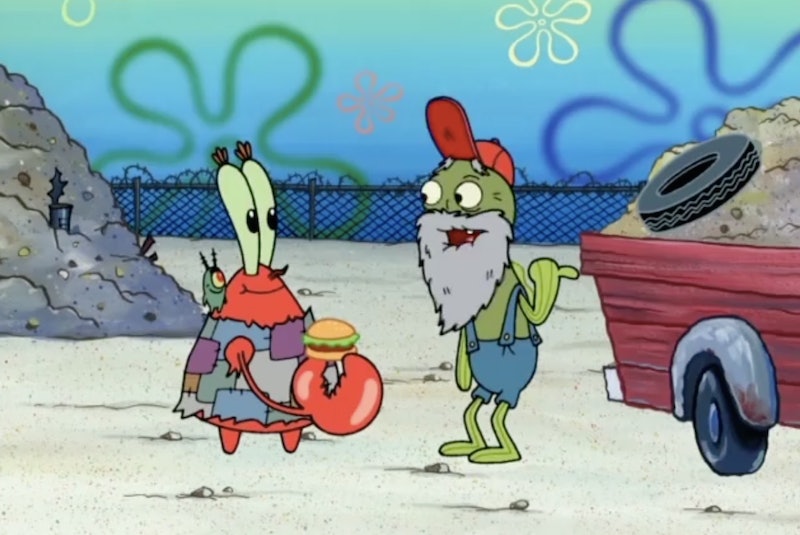 As is the way of the viral corners of the internet, the fact that Nickelodeon revealed Old Man Jenkins' true identity on Spongebob Squarepants has got people talking. Old Man Jenkins' character running gag in the cartoon, someone who shows up in several episodes to mistake a pole for a beautiful young woman or to get shot out of a cannon or what have you. Also, he hates them flying machines. However, while it's... nice that the real Old Man Jenkins can finally stand up, that's far from the biggest mystery that the show has ever left unanswered in the past 18 years. Why bother to wonder about Old Man Jenkins when we still don't know who Pearl's mom is?

The underwhelming reveal happened in a Facebook video on Nickelodeon's official page titled "Have you ever wondered: Who is the REAL Old Man Jenkins?" Um, no. No one has ever wondered that. Admittedly, fans would have good cause to, because Old Man Jenkins has looked different almost every time that he's appeared on the show. He's had a beard and been clean shaven. He's worn glasses and had 20/20 vision. He's had a boat and he's worked at the garbage dump. Unless he had cloned himself or was a Time Lord, only one of those Old Man Jenkins could be the real Old Man Jenkins.

But the bigger mystery that Nickelodeon needs to address is who the heck had Pearl. Pearl is the daughter of SpongeBob's boss, Mr. Krabs, and she is a whale. Mr. Krabs is a crab, and his daughter is a whale. It would stand to reason by the laws of nature... somehow... that his wife should also be a whale. But she's never actually appeared on the show, and the most frequent reference to her is in Mr. Krabs' frequent use of "Mother of Pearl!" as an exclamation of surprise. One can assume, from the latter, that Mrs. Pearl passed away, but the show has never actually confirmed if she died, or if she just left them and doesn't stay in touch.

One dark SpongeBoB theory that went viral in 2015 claimed that Mr. Krabs didn't actually have Pearl. Instead, he stumbled upon her mother's dead carcass and built the Krusty Krab around it. (Yes, around. As in her bones are probably in those walls.) While doing so, he stumbled upon the infant Pearl and decided to take her for his own — possibly for murderous intent, if Krabby Patties are made of whale meat. (The content of the burger patties is another unsolved mystery.) Reddit user walla_walla_rhubarb then finished by saying that, when Mr. Krabs runs out of meat, Pearl will "go off to college" aka being "butchered, cooked, and served up" by SpongeBob. This is the exact kind of nonsense that solving the mystery of who Pearl's mom is would help avert. And it's not like fans haven't asked.

Reddit user jakefreydo had a less dark theory: Mr. Krabs is Pearl's adopted father, with whom her mother has shared custody. This, they claimed, would explain why Pearl isn't seen in every episode; her frequent disappearances are the time she's spending with her mother, who likely left Mr. Krabs because of his "obvious obsession with money."

Of course, the adoption theory may have, however, been lampooned by the fact that Mr. Krabs references having been there when Pearl was born — though it's entirely possible he and Pearl's mother got married while she was pregnant, but before the birth.

Either way, while Old Man Jenkins is obviously a shapeshifter, SpongeBob fans could likely have lived without knowing which version of himself is his real self. Especially since that doesn't really answer where the other versions came from and why they all have the same name.

What the people really want to know is who had Pearl and why we've never seen her. What's the relationship between Pearl's parents, either before or now? How did a crab produce a whale? These hard-hitting mysteries will just have to go unsolved, but at least we know Old Red Cap Man Jenkins is the truest of all Old Man Jenkinses. Or something.