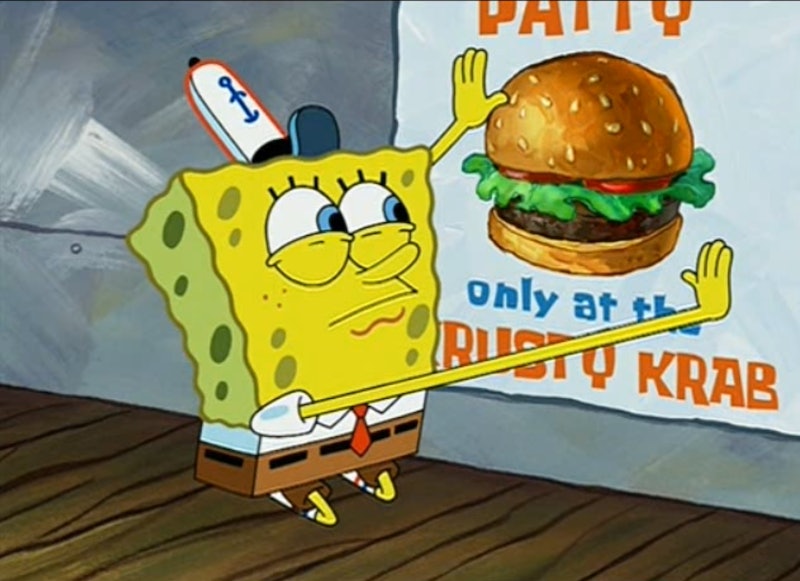 What's the secret ingredient in Krabby Patties? This is the question that has haunted poor Plankton and a legion of SpongeBob SquarePants devotees for nearly two decades. Then, on Wednesday, BuzzFeed posted a bonkers fan theory about Krabby Patties that left the internet certain the secret formula actually contains crabs. Think about that for a minute — or don't, if you want your childhood innocence preserved. Since the proprietor of the Krusty Krab is Mr. Krabs, who is an actual crab, this revelation was disturbing on multiple levels. If he's been serving up crab to his customers all these years would that make him a cannibal? A serial killer? Either way that would be a horrifying turn of events for the citizens of Bikini Bottom. Thankfully, Nickelodeon debunked the theory on Instagram user @Daquan's page.

Nickelodeon's official Instagram account commented on the theory, "We can 100 percent confirm Krabby Patties are not made of crabs." However, if you think that's the end of the story, you're wrong. Now that the seed of doubt has been planted, fans can't let this theory go. The comments on @Daquan's post are full of fans who think Nickelodeon protested a little too quickly. After all, there are precious few crabs in Bikini Bottom. Sure, a few show up in the episode "Shell of a Man," when Mr. Krabs reunites with his Navy buddies, and there's his mom, but shouldn't there be more crabs out there? Hopefully, they're just frequenting another restaurant, and not, you know, on the menu.

There's also the tiny matter of the episode "Mid-Life Crustacean." In the episode, Mr. Krabs takes a bite out of a Krabby Patty and says, "So that's what I taste like." Yeah, that happened.

Maybe that's for the best, because King Neptune's Poseidon Powder sounds almost as suspicious as the crab theory. For now, this long-running mystery remains unsolved. But given the two options currently on the table, it's actually better that way for the sake of children everywhere.