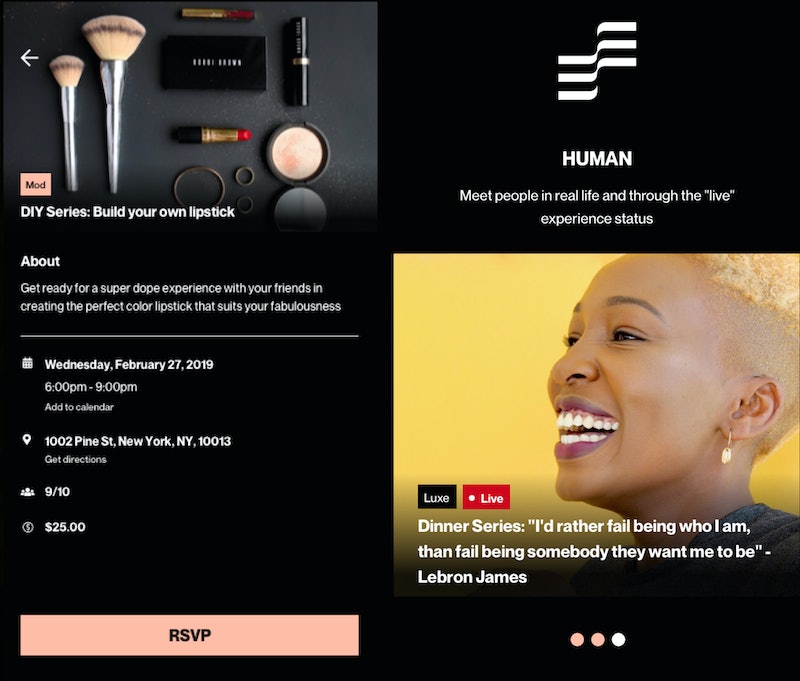 One of the biggest questions I’ve had to grapple with in my post-college years is, “How do you make friends as an adult?” Sure, I have my work wives and friends of friends I’m invited to brunch with, but it’s hard to get to know people (like, really get to know them) without the structure of work or school. And for people who are just finding their way in a new city, it can feel almost impossible. Fortunately, as much as people bemoan the ways technology is making us lonely, technology can also help bring us together. That’s why a new app called Squad just launched — to help people connect IRL over things they love.

Basically, Squad connects members to cool, curated events in their city for just $10 a month. Lots of these events are free to members, though the average cost of events is around $20-$30, a representative for Squad tells Bustle. There are also “chill” and “luxe” events, which could be things like a wine tasting or a private dinner catered by a renowned chef, respectively. (“Luxe” events start at $100 on top of the membership fee.) There are also “Squad talks,” where members share their expertise on different subjects like finance, beauty, tech, or other fields (which, uh, sign me up). The app also connects you with other members attending, so you can start a conversation in the Uber over. If you’ve ever been stuck on figuring out ways to meet people that don’t involve joining a softball league or ~networking~, this app is for you.

Founder and CEO Isa D. Watson created the platform as a way to help people meet potential friends in their cities, citing an increase in loneliness among Millennials and Gen Z as a reason why. “My friends and colleagues were increasingly attached to their Instagram accounts, but yearned for the ability to connect in real life,” Watson is quoted as saying in a press release about the launch.

Social media has unquestionably made it easier to connect with people across the globe, but because it’s so convenient to interact online, maintaining relationships offline is becoming more of a rarity, not to mention finding new relationships altogether. Many studies on friendship show that a major factor in developing closeness is time, meaning newer relationships will understandably be less deep than old ones, no matter how the friends communicate. But one study from 2016 shows that friendships that take place primarily IRL are “significantly deeper, more satisfying, [and] more resilient” than relationships that are mostly online, although the study authors note that these kinds of relationships take more effort. Still, most would argue that that effort is largely worth it.

“Many [people] want to build their social circle, but have no idea how to make that happen,” the press release about the launch reads. “Squad provides an organic and authentic solution to millennials wanting to connect and takes social awkwardness out of the equation.” The invite-only service is currently only available in New York City, but the team has plans to expand to other metro areas. The app is free to download for iOS and Android.