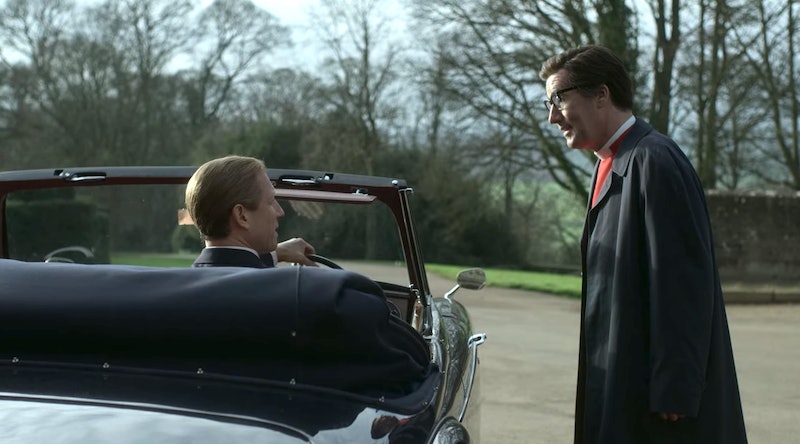 Spoilers ahead for The Crown Season 3. In The Crown's third season, the 1969 moon landing catapults Prince Philip into an existential crisis. He's inspired by the feat, but unimpressed with the American astronauts' reflection on what he sees as a perspective-upending experience. In search of guidance, he turns to the priest of Windsor Palace and founds St. George's House, an organization dedicated to the exploration of faith and philosophy. Like with most aspects of the British royal family's life, the show took some liberties with the details. But St. George's House was founded by Prince Philip and the Dean of Windsor, Robin Woods — and it still exists today.

The real St. George's House was established in 1966 — three years before the moon landing. Crown star Tobias Menzies, who plays Philip, told The Wrap there is "no evidence" that his real-life counterpart became fascinated with the moon landing, but that the storyline allowed the show to explore "the more complicated feelings [Philip] might have about what he's done with his life."

In an excerpt from The Crown: The Official Companion, Volume 2 published by The Daily Beast, author and Crown historian Robert Lacey discussed how Prince Philip came to be involved with St. George's House IRL. By Lacey's account, the Duke of Edinburgh liked Woods' proposal for the organization immediately, and helped to raise the money needed to renovate the older, dilapidated buildings on the Windsor grounds that became home to St. George's House. When it opened on Oct. 23, 1966, Prince Philip gave a 40-minute introduction speech and then moderated a debate. He continued to stay involved in his later years, even publishing a book in 1982 which features the philosophical lectures and speeches he's given there. Two more editions were subsequently published.

The website for St. George's House notes that Philip and Woods founded it to be "a place where people of influence and responsibility in every area of society can come together to explore and communicate their views and analysis of contemporary issues." So though The Crown shows Philip as the only non-clergy member initially involved and the current board still includes many clergy members, St. George's House has broadened its scope. The website states it's open to "people in positions of leadership within government, industry, commerce, and the churches," and notably, women are now members of the board as well as program directors— an element that was missing in those early days.

It's still an elite institution, but those interested in the discussions it fosters can still glean some insight about what goes on there: St. George's House in on social media, and sometimes shares lectures given at the organization.