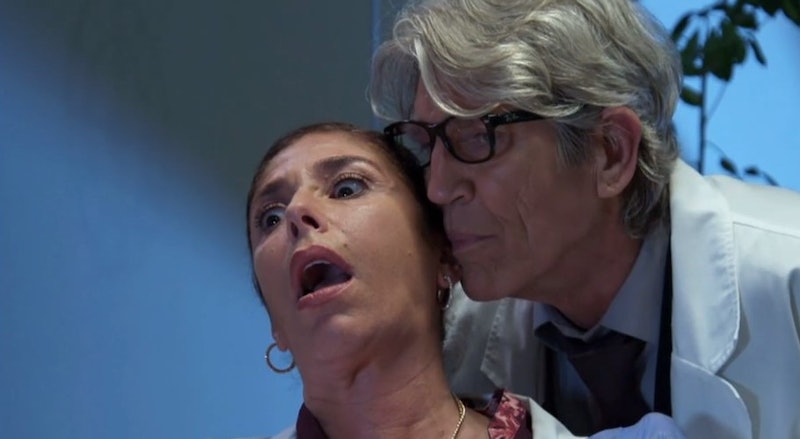 Leave it to Lifetime to make you distrust literally every person around you. There's killer friends, psycho grannies, creepy kids, obsessed followers, and, of course, the classic good guy who is actually a dangerous stalker. The network's new drama, Stalked By My Doctor: A Sleepwalker’s Nightmare thankfully isn't based on a true story, but the premise may make you pretty nervous for your next checkup — you know, on top of the anxiety doctor visits already bring.

Veteran Lifetime actor Eric Roberts stars in the film as Dr. Albert Beck, who is back at his shady dealings once again after assuming a new identity. He's wanted for several criminal charges, but that doesn't stop Dr. Beck from somehow finding a new job at a sleep clinic. There, he meets Shelli, a woman with nocturnal sexsomnia, and immediately becomes obsessed with her... until her beautiful niece comes in with the same condition, apparently shifting his focus.

According to Everyday Health, sexsomnia is a real-life condition that causes people to act out in a sexual manner while sleeping. That makes the premise even more disturbing: Dr. Beck is taking physical advantage of his patients who are genuinely looking to him for help, and who are dealing with something that affects people in real life. To make matters worse, this is just the latest in a line of several Stalked By My Doctor movies that have shown Dr. Beck kidnapping and attempting to murder victims. So in sum, you should be especially relieved this isn't based on a true story.

The Stalked By My Doctor: A Sleepwalker's Nightmare trailer shows Dr. Beck vowing to "help" his new victim(s). An employee sees incriminating evidence on a computer screen, but she's literally stabbed in the back by Dr. Beck before she can report him to the authorities. He then starts to lie to his young patient about her Aunt Shelli doing "terrible things," right before Shelli is shown strapped to a gurney. Because he talks about himself in the third person, every line that Dr. Beck says makes him sound like a cartoon villain. It's a truly bizarre and far-fetched plot, but that's exactly what Lifetime fans have come to love.

There are so many questions that need answers. First, how does Dr. Beck keep getting away with crimes? It seems like someone would recognize him from a previous case or at least do some research into whatever name he is providing to check his credentials.

Secondly, how old is Shelli’s niece? Did Dr. Beck somehow frame the aunt for murder? She was shown waking up to bloody hands and a knife right before being led away by police. And also, why hasn't anyone killed Dr. Beck yet? The only way to solve this kind of problem in a Lifetime movie is to fight to the death, so it's time to end Dr. Beck’s reign of terror for good.

Will Shelli and her niece give this out-of-control doctor the justice that he deserves? Viewers will have to tune in on July 13 to see how to get rid of a sleepwalker's worst nightmare.

More like this
At 28, Rosie Perez Risked Her Career To Stop Playing Stereotypes
By Gabrielle Bondi
Here’s Everything Coming To & Leaving Netflix In February
By Jake Viswanath
'Abbott Elementary' Fans Probably Missed This 'Parent Trap' Easter Egg
By Sam Ramsden
This First Look At 'The Gold' Shows Jack Lowden In A Whole New Light
By El Hunt and Sam Ramsden
Get Even More From Bustle — Sign Up For The Newsletter
From hair trends to relationship advice, our daily newsletter has everything you need to sound like a person who’s on TikTok, even if you aren’t.