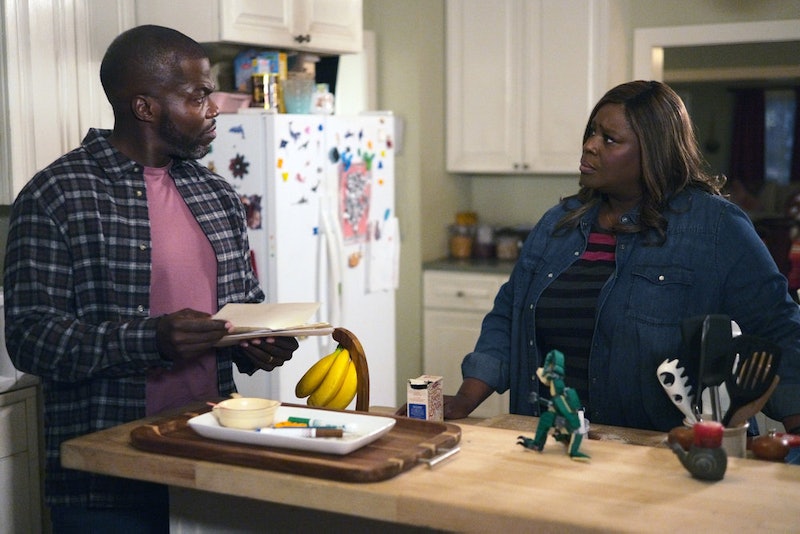 Spoilers ahead for Good Girls Season 3, Episode 7. Good Girls star Retta once called Ruby's husband "the moral center of our family," but now that Stan has his own criminal side hustle, that's kind of been thrown out the window. Initially, the opportunity just fell into Stan's lap. While he was providing security for the strip club workers at a private house party for a wealthy client, they started stealing jewelry. It's an easy target: the guys have their own secrets they don't want the cops to find out, and they're rich enough that they can simply replace what was taken instead of pressing charges.

But once Stan realized how well this paid, he decided to use his police skills to up the ante. He explained that they would start doing two parties per person: one to make the guy trust them (and for Stan to case the joint), and one to make the steal. They'd also only take one super expensive piece, because then the rich guy would be more likely to think it just got lost.

It's a smart (if illegal) scheme, but a surprising one coming from Stan. Just an episode ago he turned down his chance to be a cop again because he had too much integrity to go back to work after all he'd been through with Ruby and Beth's criminal empire. Now he's gone from that to helping mastermind a criminal ring?

Well, just as Ruby only got into crime to pay for her daughters' medicine, Stan seems to be doing this to help his family first and foremost. Ruby got shot in this episode, and her medical bills are astronomical. She's also not able to make any money from the counterfeiting at the moment because Rio is taking all of their product. Stan must have felt like he had no choice.

This is a total 180 from where Stan was at the end of Season 2, when he told Ruby they were lucky not to have been caught and that they should get out for good. Ruby didn't listen, almost immediately getting back into business. At first Stan didn't want to hear anything about it, but now he seems resigned to this being what their life is. As time goes on, it gets less shocking and more normal. The Stan of Season 1 may not have ever been involved in something like this, but desperate times call for desperate measures.

So far Ruby doesn't know about Stan's new side hustle, but he may tell her soon. The synopsis for the next episode (airing April 5) says "Stan has a surprise for Ruby that makes her question their involvement with crime." That seems to suggest Ruby questions it in a bad way, but maybe Stan explains how much money he's making, and maybe she's relieved to have another source of income and less pressure on her.

Whatever the case, if this show has taught us anything, it's that illegal activity is never the easy solution it sounds like it would be. Perhaps Stan didn't see the J. Lo movie Hustlers, but this kind of "strip club workers steal from rich men" plot doesn't end up going too well.

More like this
This First Look At 'The Gold' Shows Jack Lowden In A Whole New Light
By El Hunt and Sam Ramsden
Linda Ronstadt’s “Long Long Time” Plays A Pivotal Role In The Last Of Us
By Brad Witter
Taylor Swift Visited The 'Glee' Set For This Bizarre Season 5 Episode
By Grace Wehniainen
'The Queen’s Gambit' Season 2 Tweet Wasn’t From Anya Taylor-Joy
By Mary Kate McGrath, Jack Irvin and Grace Wehniainen
Get Even More From Bustle — Sign Up For The Newsletter
From hair trends to relationship advice, our daily newsletter has everything you need to sound like a person who’s on TikTok, even if you aren’t.