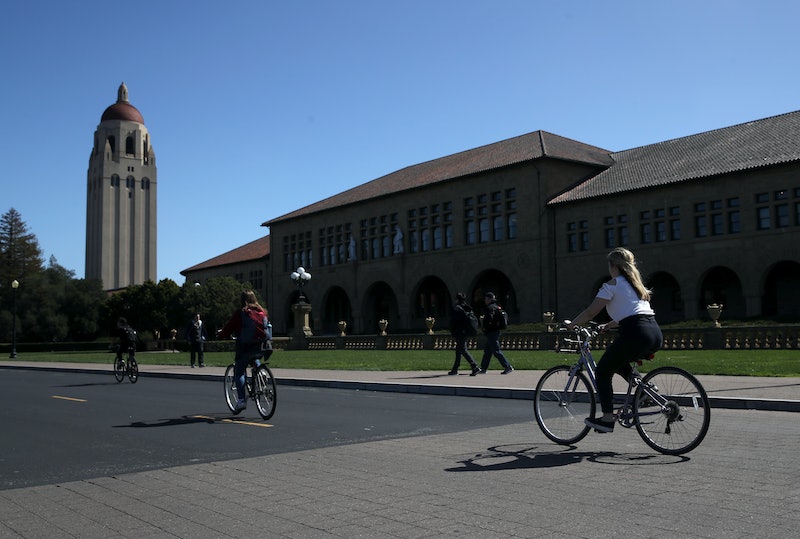 A second student has been penalized as part of the ongoing college admission scandal. Stanford University has expelled a student who provided false information in their application, the school said in a statement. The student has not been named.

"We determined that some of the material in the student’s application is false and, in accordance with our policies, have rescinded admission," Stanford said in a statement. "Any credits earned have also been vacated. The student is no longer on Stanford’s campus."

In a statement released on March 21, the school said it had identified a student associated with a donation from the charity at the heart of the larger college admissions scandal: Key Worldwide Foundation. The donation was made to Stanford's sailing program, according to the school.

"The contribution was made several months after the student was admitted to Stanford," the university said in a statement. "The student had no recommendation from the former sailing coach, or any other coach, and has not at any time had an affiliation with the Stanford sailing program or any other Stanford athletic team."

In federal court last month, former Stanford sailing coach John Vandemoer pleaded guilty to one count of racketeering conspiracy, according to Reuters. Vandemoer admit to accepting bribes in exchange for offering athletic recommendations for two prospective Stanford students, neither of whom ever finished their application processes, according to the university. He no longer works at Stanford, per the school.

Stanford said in a previous statement that the Key Worldwide Foundation had contributed $770,000 to the sailing program, by way of three separate gifts. The two prospective students who never completed their applications were related to $110,000 and $160,000 respective donations, according to the university. Therefore, CNN reports, the third student appears to be associated with the remaining $500,000.

Two weeks ago, Yale University announced that it had rescinded admission for one of its own students. The university did not reveal that student's name, either.

Prosecutors have said that students were typically not aware that their parents allegedly participated in the alleged scandal. According to The Washington Post, about 700 people were part of the larger alleged conspiracy, which included efforts to doctor test scores, falsify application profiles, and coordinate bribes. More than 50 people have been charged so far, per the Post.

In a Frequently Asked Questions page posted on Stanford's website, the university said that it is looking for a place to redirect the funds that it received as part of the alleged scheme, ideally, "to an entity unaffiliated with Stanford."

"We do not have details at this point, but we want to do the right thing with funds that were contributed as part of a fraudulent activity," the university said.

In its statement, Stanford added that the alleged scheme has prompted administration to review certain processes and practices at the school. "We are committed to ensuring that financial contributions to Stanford receive the proper level of scrutiny," the university said, "and to ensuring that donors are never under the impression that a financial contribution will lead to a favorable admission decision."