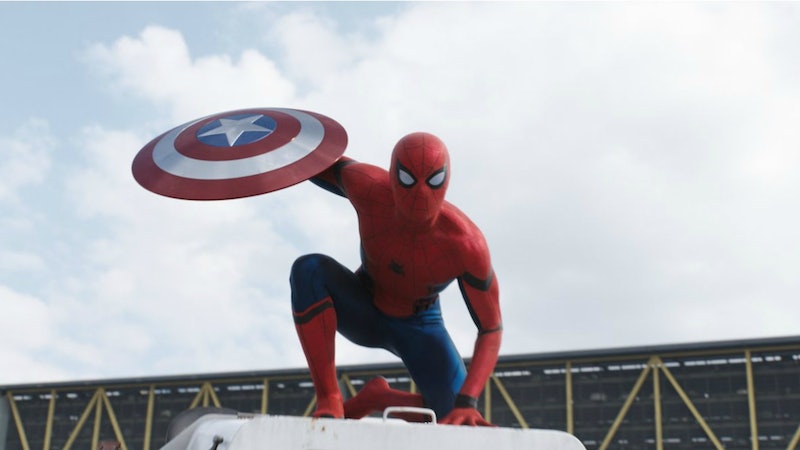 While filming Avengers: Infinity War, Robert Downey Jr., Chris Pratt, and Tom Holland took time out of their busy schedules to discuss what will be the largest installment in the Marvel Cinematic Universe yet. It's been hinted at (and kind of expected, considering the scope of the film), but it hasn't been confirmed whether or not Pratt and Holland, aka Star Lord and Spider-Man, would be part of Infinity War... until now. Thanks to a new Infinity War featurette, you can count on their presence.

The recently released featurette cuts back and forth between interviews with the three actors, the film's directors (the Russo brothers, who also directed two Captain America films), and producer Kevin Feige. There are basically two things we can glean from this three-and-a-half minute spot: First, this film is going to be really, really hard to make. Second? It will undoubtedly be everything this franchise has been preparing for since 2008, aka "an unprecedented culmination of a series of films linked together," as Feige says in the clip.

As for how the newest confirmed cast members will fit into the larger story? Tough to say. But, Pratt and Holland, or Star Lord and Spider-Man — whatever you want to call them — will be there. And though they are neophytes to the hysteria-inducing Marvel ensemble films, they fit right in next to well-seasoned vet, Downey Jr. These are all good signs.

Spider-Man's first MCU entry was last year's Captain America: Civil War. He didn't get that much screen time, but his scenes prepared audiences for his solo film, Spider-Man: Homecoming due out in July 2017. They also established his relationship with Tony Stark, which will reappear in Homecoming, and probably Infinity War, too. Co-director Joe Russo divulged, "Tony senses this greater threat approaching, so he is doing everything in his power to keep the Earth safe." Which, will likely include enlisting more help from Spider-Man. (Hopefully more than one scene's worth of help.)

"We know they're gonna face Thanos, we've been setting that up since Avengers," Feige says in the featurette. "How do you that in a way that is unexpected, that pits the Avengers against somebody who is more powerful than anyone they've ever faced, and make them completely unprepared to face them?"

In Vol. 2, the Guardians won't be dealing with Thanos like they did in the first installment, leaving room for Star Lord and his crew to come save the day in Infinity War. Or at least assist. During one of the media set visits of Guardians Of The Galaxy Vol. 2, Pratt explained why they won't be coming for Thanos this time around. "This is really falling into what I’m happy about — expanding outward, you know? It’s cosmic and so why not move outward?" he said, in an interview with ComingSoon.net. Pratt continued,

"That’s how it is in space and so the amount of stories are unlimited and I know that there are branches of the Marvel tree that kind of fold in on themselves, and you’re gonna obviously see that in the Avengers 3 and 4."

The first half of the two-film Infinity War will hit theaters in May 2018.